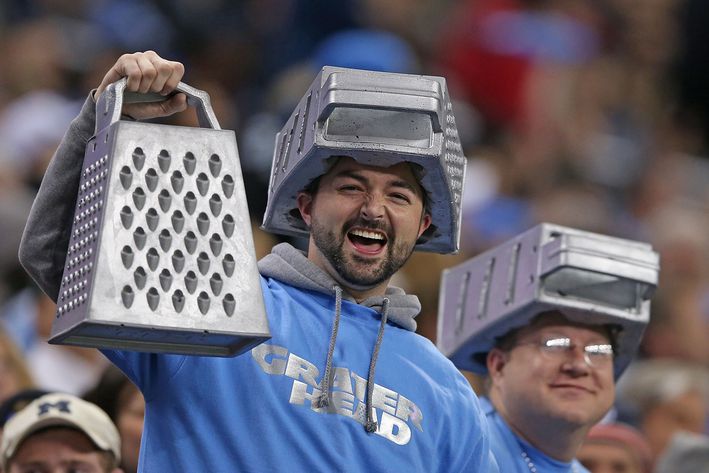 The award for the fewest rushing yards allowed by a team in a regular season goes to the 2000 Ravens* anchored by linebacker Ray Lewis. The Ravens allowed a paltry 970 yards on the ground to pick up an impressive 12-4 regular season record. Oh, and this same defense went on to win Super Bowl XXXV as well.

The Lions are nearly on track to break this record.

Let’s take a look at the numbers. Through 13 games, the Lions have allowed 817 yards on the ground. The three remaining regular season games are against repeat foes; in fact, they are against all of the other teams in the NFC North.

The last time the Lions played the Vikings, Bears, and Packers, Detroit’s defense gave up a meager 69, 13, and 76 yards respectively. If we can expect a repeat performance then the Lions are set for 975 allowed rushing yards on the season – just five more than the NFL-best 2000 Ravens.

Of course, teams change throughout the season. Let’s look at some trends. The Lions do better at home than away: about 25% better than average when home and 25% worse than average when away. This isn’t too surprising. We can also look at how the Lions defense has done lately. In the last three games (Patriots, Bears, Bucs) the Lions have done better than their average, even when accounting for the fact that two of those games were in Detroit. On the other hand, all three of the latest teams rank in the bottom half of the NFL in rushing production this year, coming in 21st, 26th, and 31st, respectively, so perhaps a slight boost in recent statistics shouldn’t be taken too seriously.

Could the Lions do it? Maybe. It looks like they will be about right on track. I would probably estimate a little bit more than 970 yards allowed on the ground.

And who knows, maybe Rodgers takes a knee on the last play of the Lions regular season (hopefully because the Lions are already up by 28) and that takes Detroit to 969 rushing yards allowed.

*Other teams have allowed fewer rushing yards in a season, but since the move to a standard 14 game season in 1961, no team has done better per game than the 2000 Ravens.

Last week was one of the best football weeks in recent memory, and although our Tuesday Afternoon Inside Linebacker weekly feature has fallen by the wayside due to worldly obligations, this week and the week ahead deserve note.

The Lions started things off on Thanksgiving with a wonderful win over Green Bay. It was Detroit’s first win on Turkey Day in nine years, and it was the first time Matt Stafford beat the Pack. The Lions also avenged the career game Matt Flynn had the only previous time he quarterbacked Green Bay against Detroit.

Brendan and I were in the Big House for Michigan’s surprise one-point loss to Ohio State, and I made it out of Ann Arbor in time to see Georgia come back to defeat Georgia Tech in overtime, note Vandy’s comeback win over Wake Forest, and watch maybe the greatest one second of college football in Auburn’s regulation toppling of Alabama in the Iron Bowl.

The BCS national championship: Right now, Florida State is set to play Ohio State, but that could change after this weekend. Each team needs to beat its conference championship opponent, Duke and Michigan State (more on basketball later!) respectively, of course. Auburn’s also in the mix here. If the Eagles/Tigers/Plainsmen beat Missouri in the SEC championship game, one-loss/SEC champ Auburn could leap an undefeated Ohio State. But you don’t have to take my word for it. Just ask Florida head coach Urban Meyer:

There are a lot of people making a lot of decisions out there, but this is a big one. We’re going to tell a group of young men, who just went 12-1 in a most difficult schedule against six ranked opponents, that they don’t have a chance to play for a national championship? I’m going to need help with that one.

That was back in 2006, though, and in 2013, Meyer finds himself singing a decidedly different tune as the head coach of Ohio State. 2006 Urban Meyer got his way, something 2013 Urban Meyer ought to keep in mind this week.

So the holidays are over.  The BCS games were mostly boring.  The NFL wild card games were also mostly boring.  You are probably sitting around pondering if life is even worth it any more.  Don’t fear, loyal listener(s), it is.  There’s a new ALDLAND podcast for you to listen to in which we discuss all that boring stuff and make sense of it.  As the great philosopher John L. Smith once said, “SMILE!”

We find ourselves late on a Monday after another weekend of close games. On Saturday, woefully underachieving Michigan State lost in overtime to Iowa as a result of what one local radio host called the worst coaching he had ever seen in his life, and the man is neither young nor inexperienced in the field. In a real upset, LSU threw a monkey wrench in the SEC East race and beat South Carolina 23-21, Kansas State escaped Ames with a 27-21 win over Iowa State, Notre Dame beat Stanford 20-13 in overtime, and Texas A&M squeaked by Louisiana Tech 59-57. Even the Florida-Vanderbilt game was close into the fourth quarter before the Gators and their quarterback ran away with it. More on that game later this week.

Saturday had its share of blowouts, naturally, and the notable ones included Alabama’s 42-10 win at Missouri, which remains winless in its new conference, Texas Tech’s 49-14 embarrassment of one-time national championship contender West Virginia, still-undefeated Oregon State’s 42-24 win over BYU, and Michigan’s 45-0 muddy execution of Illinois on Wolverine homecoming. Michigan hosts Michigan State in another ALDLAND outing, more on which toward the end of the week.

The NFL had its share of close contests too, including the Lions’ overtime win over hapless Philadelphia, Buffalo’s 19-16 overtime win over Arizona, whose kicker hit a 61-yarder to tie the game but subsequently missed a 30-something yard kick to win the game in the final seconds, the Seahawks 24-23 win over New England, Atlanta’s come-from-behind win over Oakland to become the league’s final undefeated team, Miami’s 17-14 victory over the Rams, and Baltimore’s 31-29 capitalization on the Dallas (ongoing) Disaster. Baltimore payed a long-term price for its win, though, sacrificing defenders Ray Lewis and Ladarius Webb at last to the football devil (no, not the commissioner– separate office) in payment for their past defensive successes. Lewis and Webb are out for the season. Other high-flying teams went down in spectacular fashion on Sunday, including San Francisco, 26-3 at the hands of the Giants, and Houston, 42-24 to Green Bay on Sunday night.

In off-field NFL news, Jonathan Vilma, the embattled New Orleans Saint, reportedly will be allowed to play as soon as this weekend, although it isn’t clear if he will. Vilma continues to maintain a defamation suit against Roger Goodell.

In baseball, the final four is set and in motion. Detroit seized a 2-0 lead over the Yankees as the series heads to Detroit with AL strikeout kings Justin Verlander and Max Scherzer yet to pitch for the Tigers. The other road team, St. Louis, has a 1-0 lead in the NLCS battle of the two most recent defending World Series champions, though the Cardinals are down 5-1 in the fourth as I write this.

The NFL conference championship round is set, after Tom Brady’s Patriots and Eli Manning’s Giants brought harsh and decisive ends to special seasons for the Denver Tebows and Green Bay Packers, respectively. In its first home playoff game of the Harbaugh era, the Ravens won a close victory over the Texans thanks, as usual, to their defense, but it was the other Harbaugh whose team played the game of the weekend at Candlestick Park in San Francisco, defeating the Saints in a game that saw twenty-eight points scored in the final four minutes alone, when each touchdown also was a lead-change. While fan favorites and media darlings Green Bay and Denver are out, along with popular championship pick New Orleans, the final four teams offer a lot of excitement. The NFC championship features two teams (SF and NYG) that are peaking right now, and the AFC features a traditional, compelling offense vs. defense matchup (NE and BAL).

The college basketball national picture remains mixed, with Northwestern taking Michigan to overtime and then ending Michigan State’s fifteen-game win streak. Duke, Kentucky, and Georgetown all have shown weaknesses, while Syracuse has maintained a perfect record atop the Big East (ditto for Baylor in the Big XII). Vanderbilt, a top team in preseason rankings, appears to have found its way after falling out of the top 25, although a backloaded schedule means its toughest tests are yet to come.