In June of 1993, the Chicago Bulls stood as back-to-back NBA champions looking to complete the first threepeat since the 1960s Boston Celtics. After finals series wins over the Los Angeles Lakers in 1991 and Portland Trailblazers in 1992, the Bulls faced Charles Barkley’s Phoenix Suns in the 1993 NBA finals.

Phoenix, winner of sixty-two games during the regular season, held home-court advantage over the fifty-seven-win Bulls in a two-three-two finals series format. The Bulls won the first two games on the road, and the teams then split the first two games in Chicago. Holding a 3-1 series lead following their home win in game four on June 16, the Bulls had one opportunity to close out the series at home– game five on June 18– before the series would return to Phoenix for possible games six and seven.

Bulls forward Horace Grant was worried about the possibility of a summer return to Arizona, and Phil Jackson, Chicago’s cerebral coach dubbed the “Zen Master,” was especially interested in wrapping things up at home in game five, including for personal reasons: he had a concert to attend.

END_OF_DOCUMENT_TOKEN_TO_BE_REPLACED

NBA free agent Jamal Crawford confirmed that he still has it. Although he no longer is the active leader in three-pointers attempted (as he was when we last wrote about him in 2018), Crawford– a one-and-done Michigan Wolverine during Michigan State’s championship season– confirmed last night that he continues to be a BlackBerry user. 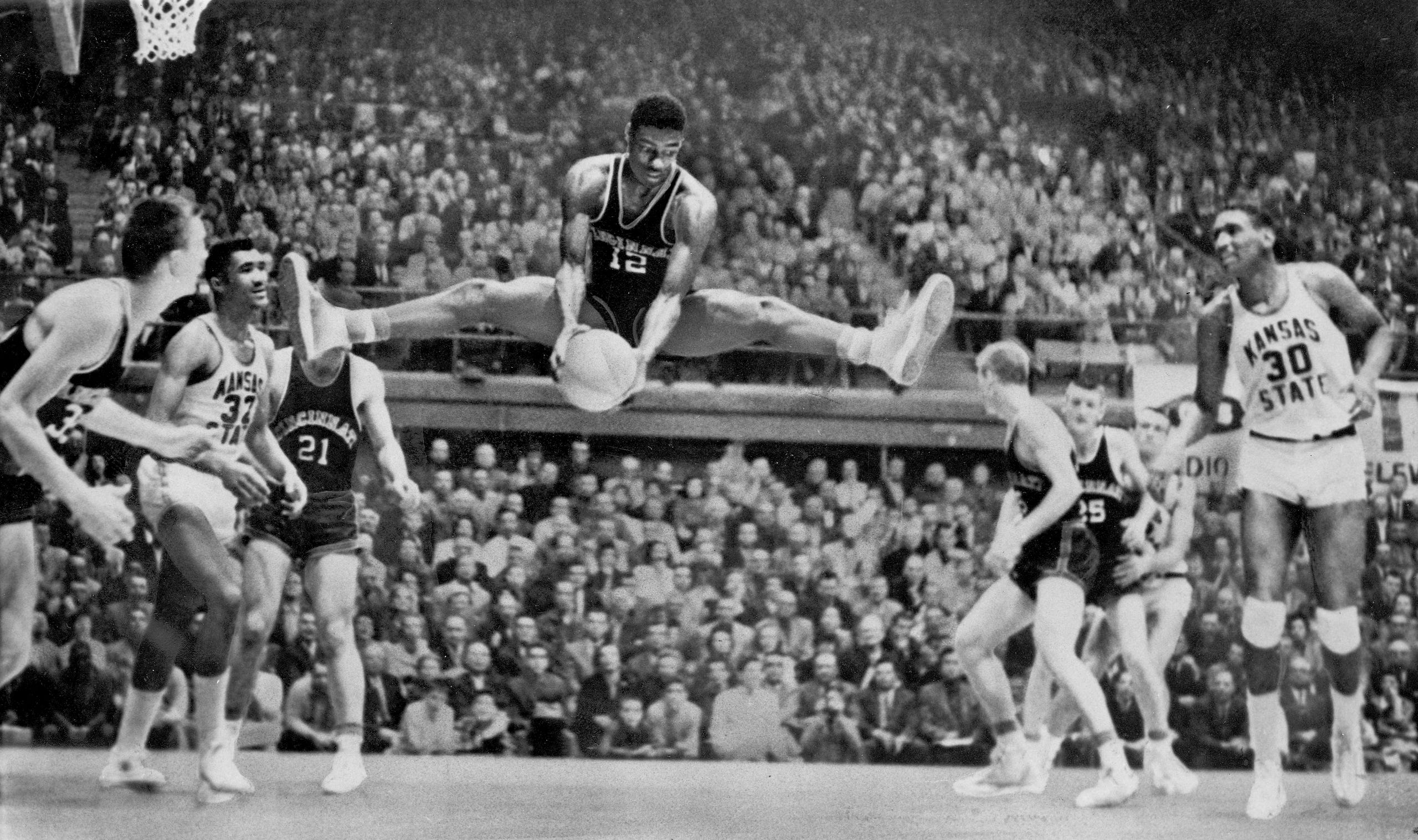 Oscar Robertson is an NBA champion, MVP, and twelve-time All-Star, and he was the first NBA player to average a triple-double over the course of a season. In college, he averaged 33.8 points per game for the Cincinnati Bearcats, and he left school as the all-time leading scorer in NCAA history.

The 1957-58 season was Robertson’s sophomore year at Cincinnati and the first in which he saw playing time for the Bearcats. Robertson immediately made his presence felt, to the tune of 35.1 points and 15.2 rebounds in 38.8 minutes per game, helping Cincinnati to a 25-3 record and a Missouri Valley Conference championship.

Meanwhile, up the road in Oxford, Miami University was on a run of its own. Behind future NBA player Wayne Embry, the RedHawks finished a respectable 18-9, but notably went 12-0 in MAC play, the last team to accomplish that feat and only the second-ever team to complete an undefeated conference schedule (the 1949-50 Cincinnati team was 10-0 in the MAC before leaving the conference). One of Miami’s reserves was Ken Babbs. Listed at 6’3″, the Mentor, Ohio native contributed eleven points and four rebounds in the ten games in which he appeared for the RedHawks that season.

On January 30, 1958, the RedHawks traveled to Cincinnati for a matchup with Robertson’s heavily favored Bearcats. A box score is not readily available, but Babbs recounted his memories of the game in a live interview streamed last night. According to him, Miami coach Richard Shrider, who was in his first season with the RedHawks, thought his team had no chance against Cincinnati and told his players as much, which rubbed the competitor in Babbs the wrong way. Miami planned a box-and-one defense against the Bearcats, with Babbs drawing the assignment of the “one” to mark Robertson. Determined to put up a fight, he said he planned to guard Roberston aggressively, “like stink on shit.” Then laughing, Babbs confessed: “I fouled out in two minutes.” Cincinnati won by twenty.

Both teams reached the NCAA tournament that spring. With their first-round win over Pitt, Miami became the first MAC team to win a tournament game. The Bearcats did not win any tournament games that year, but they made deep runs in Robertson’s two remaining seasons there, finishing third overall both times.

Robertson, of course, went on to professional basketball fame. Babbs, meanwhile, found fame of a different sort. That fall, after graduating from Miami, he pursued graduate studies in creative writing at Stanford. There, he befriended fellow student Ken Kesey, with whom Babbs and others soon would form the Merry Pranksters, whose culturally influential escapades with sound, film, and LSD were in part memorialized in Tom Wolfe’s memorable book, The Electric Kool-Aid Acid Test and would help propel the career of the Grateful Dead.

You can watch Babbs discuss his 1958 on-court encounter with Robertson and a later, off-court reunion here. A film of a Grateful Dead benefit concert supporting a Kesey-family creamery the Pranksters helped produce is available for a limited time below.

The New Yorker’s Louisa Thomas has the obituary. Since he came into the nation’s consciousness as Charlotte’s first-round pick out of high school in the 1996 NBA draft, Kobe Bryant has been recognized as one of the most driven athletes in sports history. We’ve heard and read stories, including many in the last few hours, that serve as oral and written testaments to Bryant’s commitment to his ambitious focus to follow and surpass the legacy of Michael Jordan as the modern game’s single best player. Even as Bryant disclaimed attention to the comparison, everyone knew that’s what he wanted. In that regard, enjoy a visual testament to Bryant’s hard work and attention to detail.

Man, how wild is this?! #Kobe #Jordan pic.twitter.com/y2gGBdEKJi

In her brief but full remembrance, Thomas addresses Bryant’s legacy, explaining that, after retirement, he

didn’t withdraw from the game, either. He mentored other players—women as well as men. In the public imagination, the battle for the best player in history may be between [LeBron] James and Michael Jordan, but Bryant was the one that many players actually idolized. He had four daughters, and he understood that they were part of his legacy, too. Gianna, the second, was a talented basketball player, and . . . Bryant acknowledged that he saw something of himself in her. (She was “insanely, insanely competitive—like, mean,” he said.) They attended several Lakers games this season, and a video of them together at a Nets game went viral. In it, Bryant appears to be intensely explaining something to Gianna, and she, pursing her lips like a typical teen-ager, laughs and takes it in.

My favorite recent PFT Commenter conspiracy theory is that Space Jam 2, which is set to star LeBron James but remains in preproduction, actually is a vehicle to allow James, newly a member of the strikingly mediocre Los Angeles Lakers, to recruit top players with salaries in excess of the league’s caps by paying them to be a part of Space Jam 2, a movie that might never actually get made. If about-to-be-free-agent Kevin Durant signs a cheap contract with the Lakers this offseason, we’ll know the foregoing is true.

Another thing that’s true is that my friend Grant Zubritsky is a musician who just released two new tracks this week that wouldn’t be out of place on the soundtrack for Space Jam 2. (Take a moment to remember the strength of the soundtrack to the original movie.) In light of all of that and the fact that I don’t know if these Spotify embeds are going to work, here for this week’s Jams are both of his new numbers:

Kanter is many things: New York Knicks center, devout Muslim, star of #NBATwitter, and enemy of the Turkish state. For the moment though, he is like anyone else on this beach—just another person in paradise, awed by all that surrounds him. “This is unbelievable,” he says.

As we walk, staring out at the Pacific in a place that feels something like the edge of the world, Kanter begins talking about other faraway places that he has considered home. At 26 years old, Kanter is no longer connected to his country or his parents, who still live there. His continued criticism of Turkish President Recep Tayyip Erdogan has landed Kanter’s father in jail and made Kanter a target of harassment and social media threats on his life. “I don’t know if he’ll ever be able to go back to Turkey,” says Fetic. “Ever.” He is rootless, building makeshift communities everywhere his life and NBA career takes him.

He finds belonging in unlikely places. A living room in Pennsylvania. A locker room in Oklahoma. The entire state of Kentucky. All have served, at least temporarily, as a refuge, giving Kanter comfort for anywhere between a few hours and a few years before he inevitably goes searching, once again, for someplace else he might call home. … Read More

I haven’t thought about Jamal Crawford in about eighteen years, since he was a one-and-done for the University of Michigan during Michigan State’s national championship season in 2000. Since then, he’s played in the NBA for Chicago, New York, Golden State, Atlanta, Portland, Los Angeles (Clippers), and Minnesota, his current team. If I’m reading this correctly, Crawford is the active leader in three-point attempts. This morning, Blake Griffin, Crawford’s former teammate in L.A., revealed that Crawford is a BlackBerry user.