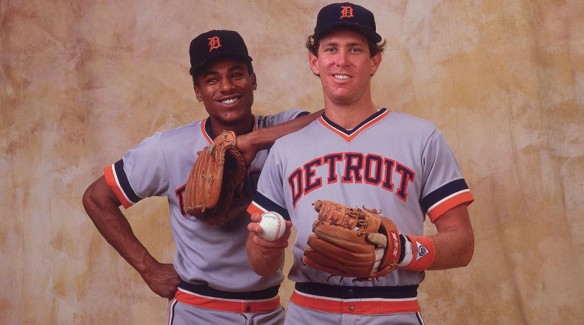 The MLB HOF is a manifestation of writer opinions, so it’s a shame to see even the local press minimizing Whitaker as they attempt to garner clicks on Trammell features as we approach induction weekend. There’s a surplus of outrage, genuine and otherwise, on the internet right now, and I’m not saying that every article has to be a protest piece or that Trammell doesn’t deserve the attention in his own right, but it strikes me as a fairly significant injustice by the relevant standards that the longest-tenured double-play pair in the game’s history will be separated at the gate to the sport’s hall of honored memories.

My dream has always been to go in together, and I stand by that. To me, that would the ultimate story.

The two of us together is a better story than one or the other. That’s kind of how I always viewed that. I’ve been saying that for years. I think that’s a darn good story, one of the better ones.

Two guys who played together for 19 years at the major-league level, and stayed with one team their whole careers, and by the way did pretty darn good themselves – that’s just my dream. I’m entitled to my own thoughts. That would be so cool.

I’ll close this brief missive with a comment from the long-tenured baseball writer Joe Posnanski following Whitaker’s omission from the latest round of HOF consideration that netted inductions for Trammell and Jack Morris:

To be blunt, most of us missed Whitaker’s greatness while he was playing. His reputation was that of a good, but not great, player. There are reasons why. It was easy to miss Whitaker because the key stats of his time — basically the only stats of his time — were batting average, home runs and RBIs. Whitaker only hit .300 once over a full season (he also walked a lot, something hardly anybody even noticed back then). He never hit 30 homers in a season, and only once topped 25. Whitaker’s career high in RBIs was 85.

These raw numbers — along with the fact that there were some very good second basemen during Whitaker’s era, such as Ryne Sandberg, Willie Randolph and Frank White — made it easy to overlook just how special he really was. How special was he? Well, here’s the big point: The more you look at the history of baseball, the more you understand how rare of a complete player Whitaker really was.

A player who gets on base, hits with some power, plays terrific defense, runs the bases well, is durable, and plays with intelligence and competitive fire is an uncommon combination.
…
When you compare Whitaker with the second basemen in the Hall of Fame, his greatness is striking. Yes, his career falls short of the five players you would probably call the best: Rogers Hornsby, Joe Morgan, Eddie Collins, Nap Lajoie and Charlie Gehringer. But there are 12 other second basemen in Cooperstown, and you could make the case that Whitaker was as good as or better than any of them — including recent inductees Craig Biggio and Roberto Alomar.

You can look at it using advanced metrics like Wins Above Replacement (WAR) and Wins Above Average (WAA), which measure wins above an average player:

You can also point out that Whitaker had more homers (244) than a dozen of Hall of Fame second basemen, scored more runs (1,386) than 10 of them and had a better OPS+ (117) than 10 of them. His defense was stellar, his baserunning was stellar, and he played 2,308 games at second base for one team — that’s the most in baseball history.

Whitaker will have to wait for his chance, but maybe we can all start thinking about him again. He was on the BBWAA ballot for only one year, and he received just 15 votes. Giving Whitaker such little Hall of Fame consideration is, I believe, one of the BBWAA’s most obvious errors — and the Modern Era Committee was created to fix such mistakes.

1 thought on “From Detroit to Cooperstown: Approaching Hall-of-Fame-induction weekend 2018 with a quick note”