The New Yorker’s Louisa Thomas has the obituary. Since he came into the nation’s consciousness as Charlotte’s first-round pick out of high school in the 1996 NBA draft, Kobe Bryant has been recognized as one of the most driven athletes in sports history. We’ve heard and read stories, including many in the last few hours, that serve as oral and written testaments to Bryant’s commitment to his ambitious focus to follow and surpass the legacy of Michael Jordan as the modern game’s single best player. Even as Bryant disclaimed attention to the comparison, everyone knew that’s what he wanted. In that regard, enjoy a visual testament to Bryant’s hard work and attention to detail.

Man, how wild is this?! #Kobe #Jordan pic.twitter.com/y2gGBdEKJi

In her brief but full remembrance, Thomas addresses Bryant’s legacy, explaining that, after retirement, he

didn’t withdraw from the game, either. He mentored other players—women as well as men. In the public imagination, the battle for the best player in history may be between [LeBron] James and Michael Jordan, but Bryant was the one that many players actually idolized. He had four daughters, and he understood that they were part of his legacy, too. Gianna, the second, was a talented basketball player, and . . . Bryant acknowledged that he saw something of himself in her. (She was “insanely, insanely competitive—like, mean,” he said.) They attended several Lakers games this season, and a video of them together at a Nets game went viral. In it, Bryant appears to be intensely explaining something to Gianna, and she, pursing her lips like a typical teen-ager, laughs and takes it in. 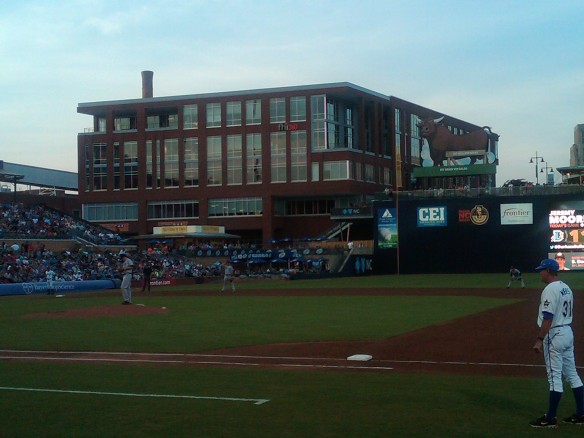 Nobody hit the bull and won a steak, but there was plenty of offense, and not quite enough defense, in Durham on Saturday night, where the Bulls (AAA-Tampa Bay) lost to the Charlotte Knights (AAA-White Sox) 6-5.

The game was so tight through the first five innings that when Charlotte finally plated the first run of the night with two out in the top of the sixth, the Knights’ 1-0 lead felt insurmountable. They built it to 3-0 in the top of the seventh, seemingly sucking the energy out of the home crowd.    END_OF_DOCUMENT_TOKEN_TO_BE_REPLACED

The NBA Draft Lottery is the ping-pong-ball-centered game the league plays with the four worst teams from the previous season to determine the order of selections for the next player draft. It’s basically beruit/beer pong with millions of dollars instead of Keystone Light, and, like timid lightweights, the winner doesn’t want to stay on the table for the next round.

The positions are selected in descending order, and the number of balls a team has in the hopper is inversely proportioned to how well the team finished the prior season. The ostensible idea is to give the last-place team the best shot of getting the first overall pick (i.e., the best chance at improving its lot in the future). Why not just award the worst team the first pick as a rule? I suppose the idea is to avoid the sort of tanking that allegedly is a problem in the NFL, where such a rule is in effect. Injecting an element of chance means it’s harder to game the system in a way that’s detrimental to the game– losing on purpose– although it can’t fully do away with the incentive to lose so long as it maintains its rehabilitative goal.

This year, the Charlotte Bobcats had the worst season in NBA history. The New Orleans Hornets, recently late of league ownership, merely had the fourth worst of the 2011-2012 season. This year’s draft lottery thus was arranged with the stated goal of giving the Bobcats the best shot at the first pick and the Hornets the worst.

Of course, once everyone saw that the Hornets would be in the mix for this year’s draft lottery, the conspiracy theorists, folk singers of my literary heart, rolled out their obvious prediction: the league was going to rig the lottery so that the Hornets got the top pick. END_OF_DOCUMENT_TOKEN_TO_BE_REPLACED