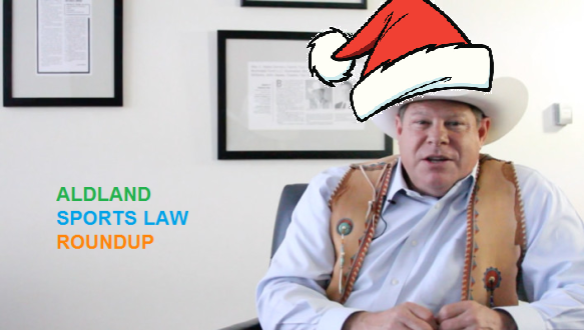 After a break for the holiday weekend, here are the top sports-related legal stories:

One of the important background dimensions to comparative baseball statistics is known as “park adjustments,” a set of corrective factors applied to account for the physical differences (e.g., outfield wall depth) between each park. Among American sports today, only Major League Baseball and NASCAR (and golf, I suppose) permit such structural variation between the competitive arenas themselves.

Professional hockey used to be in that group too. More than merely adjusting, adding, and subtracting lines on the ice to affect the flow of play, as the NHL continues to do (cf. the NBA three-point line), the rinks themselves used to be different sizes. League rules mandate a uniform rink size, but so-called “small rinks” persisted in the NHL as late as the 1980s and 1990s in Boston, Chicago, and Buffalo.

While hockey does not face the structural differences present in baseball, there still is a need to apply rink-by-rink statistical adjustments. That’s because the compiling of basic hockey statistics (e.g., shots, hits, turnovers) requires statisticians to make judgment calls to a more significant degree than in a discrete-event sport like baseball.

By way of limited background, the NHL collects basic gameplay statistics through a computer system known as the Real Time Scoring System (RTSS). A benefit of RTSS is that it aggregates and organizes data for analysis by teams, players, and fans. A vulnerability of RTSS is the subjectivity alluded to above that comes when human scorers track a fluid, dynamic sport like hockey.

While others have noted certain biases among the RTSS scorers at different rinks, a paper by Michael Schuckers and Brian Macdonald published earlier this month analyzes those discrepancies across a spread of core statistics and proposes a “Rink Effects” model that aims to do for subjective rink-to-rink differences in hockey scoring what park adjustments do for structural differences between baseball parks.    END_OF_DOCUMENT_TOKEN_TO_BE_REPLACED

There’s not a lot going on in the sports world this week . . . OR IS THERE? Join your two favorite cohosts as we discuss the biggest piece of sports fiction to come out in, well, ever: “A Win for the Devils” by Jeremy Francis. We also discuss conference tournament season and share some of our picks to surprise in major and mid major tournaments across the country.

As you can see from the above graphic, this year’s Super Bowl, already dubbed the Snow & States’ Marketing Rights Bowl, pits New York against New Jersey in a battle for subpar beach superiority. You do not have subpar taste, however, because you’re reading ALDLAND’s Super Bowl preview, the only one you’ll need to prepare yourself for the game on Sunday. What follows is a compilation of the most interesting, entertaining, and essential Super Bowl XLVIII content, concluding with the least interesting, entertaining, and essential Super Bowl XLVIII content, my game prediction:

An unusual aspect of the N.H.L.’s two outdoor games at Yankee Stadium is that the Rangers have been designated the road team for both games, even though their opponents, the Devils and the Islanders, come from outside New York City.

The reason seems to lie in the special exemption that has freed Madison Square Garden from paying property taxes since 1982.

A provision of that 1982 agreement stipulates that if the Rangers or the Knicks play a home game outside the Garden, the exemption is forfeited. … Read More

@WhalerWatch No need to hope. I think we probably have one. @LAKings are pretty fascinating this year.

And they are. The simple story is that the Kings dominated on defense all year but couldn’t score, losing 2-1 games on their way to an eighth seed in the Western Conference. By adding scorer Jeff Carter late in the season, they finally had a complete (or complete-er) team that could compete on both sides of the ice. The simpler story is that LA is 14-2 in the playoffs and undefeated on the road.

As for New Jersey, they really came out of nowhere from my perspective. I don’t pay the Eastern Conference much mind until the Stanley Cup finals anyway, but the Devils really weren’t on my radar at any point this season, which, as far as the East was concerned, seemed to be all about the Rangers and Flyers, the woes of the Penguins, and the what-if-they-meet-the-NHL’s-own-Coyotes-in-the-finals Florida Panthers, for a series I would have relentlessly hashtagged #catsanddogs.