ESPN is in the midst of a significant layoff of on-air talent this week, and most of the casualties’ names are coming to light today. The cuts are leading many to ask some fundamental questions about the network’s future. Below, from the past, a potential answer to one such question.

Is the Worldwide Leader not long for this world? Imagining the end of ESPN

My latest post at TechGraphs asks a simple question: why does ESPN still exist?

Draft Ops was a daily fantasy sports (“DFS”) website, like FanDuel and DraftKings, that used to be the “official fantasy partner” of a number of sports teams and media outlets, including the Minnesota Wild. Last spring, the Wild sued Draft Ops, alleging that the site owed the team $1.1 million pursuant to an agreement that allowed Draft Ops to use the Wild’s name and logo in advertising materials.

In a creative, if risky, attempt to avoid its contractual obligations to the Wild, Draft Ops argued that the agreement was void because, it further argued, DFS constituted illegal gambling in Minnesota. After years of litigation and lobbying by DFS operators to expand and protect the legality of their enterprise, it is fairly remarkable to see a DFS site argue that its business is illegal.

On the other hand, if any DFS site was going to turn state’s evidence, it makes sense it’d be one like Draft Ops, which appears to be out of business, filed for bankruptcy last week, and is more concerned about how it’s going to make good on the $1.1 million it allegedly owes the Wild than it is about the ongoing viability of the business model.

Draft Ops hit a roadblock in the Minnesota case last week, though, when the judge allowed the case to proceed, explaining that it was not clear that DFS was illegal under Minnesota law, and that, even if DFS clearly was illegal in the state, there still could be grounds on which the court could enforce the contract, which, the judge noted, was a sponsorship and advertising contract, not a gambling contract.

If this strategy sounds familiar, that’s because it essentially is the same one people who lost money playing DFS tried in lawsuits they filed against the DFS sites themselves last year. 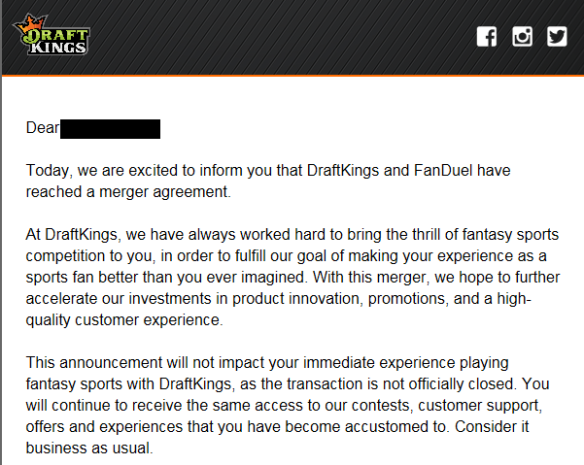 According to this morning’s press release, the two DFS companies “are merging to create a stronger entity that can focus on growing the fantasy sports market by developing new products and features, delivering enhanced user experiences and creating an overall stronger fantasy sports community, all aimed at creating a more diverse, exciting and appealing experience for fantasy sports players and sports fans generally,” which, sure.

There already was some probably unethical data sharing going on between these companies, and with the bills for difficult regulatory battles coming due, it makes perfect sense that these companies would merge. DraftKings’ CEO will become the CEO of the new company, and FanDuel’s CEO will become the chairman of the board.  The two sites will continue to operate separately through the 2017 NFL season, integrating only after the merger has cleared all regulatory hurdles and is finalized.

If you’re still playing these games without the use of a zombie computer army, well, good luck.

The internet sports gambling legal battles rage on, cricket gets technical, and headphones that could help you become a better athlete, all in my most recent post for TechGraphs, a roundup of last week’s top sports technology stories.

MLB.TV details are out for 2016, virtual reality at the NFL combine, and Steph Curry’s breaking the computer in my most recent post for TechGraphs, a roundup of the week’s top sports technology stories.

My latest post at TechGraphs checks in on the status of the baseball fan lawsuit regarding stadium safety netting and attempts to sort through what you will see (and won’t) in the way of expanded netting at parks beginning this season.