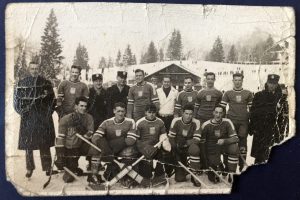 Francis Baker attended Hamilton College in upstate New York during the mid-1930s. He studied the German language, among other things, and he was the goalie for the hockey team. Hamilton head coach Albert Prettyman was selected to lead the U.S. Olympic ice hockey team. In early February 1936, on the eve of the Winter Games at Garmisch-Partenkirchen, Germany, Coach Prettyman had a problem to solve, according to hockey historian Stan Fischler.

“The regular goalie had taken sick before they left to take the boat across to the Continent,” Fischler says. “And when that happened, Prettyman got hold of his backup goalie, Francis Baker.”

Baker agreed to join the team.

“And they arrived in Garmisch-Partenkirchen only three days before the Winter Games officially began,” Hood says.

Baker practiced with the team as they prepared to compete amid a political climate in which U.S.-German relations were rocky at best.

“Well, they weren’t cordial,” Fischler says. “Certainly by that time, even though the United States under President Roosevelt was still an isolationist country, the dislike for what was going on in Germany was pretty widespread in the States.”

That dislike found its way into the opening ceremonies on Feb. 6, 1936.

Following Hitler’s declaration before a crowd of 40,000 that the 1936 Winter Games were officially open, delegations from 28 nations marched into an open-air stadium. It was a typical display of Olympic pageantry, except for the ubiquitous Nazi flags.

Hitler had told the IOC of his demand to have athletes from all nations salute him in the customary Nazi fashion, with right arms extended and rigid.

“And the American team did not do that,” Hood says. “Their arms were to the sides.”

“They didn’t acknowledge the ‘Führer,’ ” Fischler says. “And the ‘Führer’ responded by being furious. So we had a furious ‘Führer.’ ”

“And that’s what triggered Hitler to come down into the locker room,” Hood says. … Read More