This is stupid. And why would you ever bet an NBA starter that he could not make a three-point shot?

Following the San Antonio Spurs’ dominant win over the Miami Heat in the NBA finals, FiveThirtyEight decided to examine whether the popular narrative about the winners and losers– that the Spurs played a more complete, team-oriented style of basketball the Heat, increasingly reliant on their solitary superstar, could not combat– was borne out in the numbers. They did this by comparing the relative usage rates (USG%) of the teams’ lineups. Plotting the difference in USG% between each team’s “top” player, the one who “used” the most possessions to either shoot, be fouled, or commit a turnover, and each successive player, should show how well the team spread the ball around. A team that did a good job of sharing the ball should plot a flatter line than a team that did not. FiveThirtyEight’s chart supported the popular narrative: San Antonio’s line was flatter than Miami’s, and the league average, while Miami’s line topped both.

As FiveThirtyEight pointed out, this isn’t how NBA championships are supposed to be won. As much as the Heat’s assemblage of its “big three” was seen as groundbreaking, it fit the narrative that grew out of Michael Jordan’s Bulls and Kobe Bryant’s Lakers (and certainly existed before Phil Jackson coached both of those teams to multiple championships) that the NBA was a star-driven league, and the way to win championships was to have a superstar. The Heat simply presented as an extreme version of that reality, with little in the way of supporting cast members.

FiveThirtyEight only compared this year’s teams, but the article made me wonder how the last NBA champions who deviated from the star-heavy model– the Detroit Pistons team that won it all exactly ten years ago amidst a solid run– compared statistically to this year’s Spurs.

I tallied the numbers using Basketball-Reference‘s team playoff data, sorted by USG%. Before doing so, though, I made an executive decision to omit data from players who appeared in fewer than ten playoff games that year, which swept out Austin Daye (one game for the 2014 Spurs) and Darko Milicic (eight games for the 2004 Pistons). The resulting plot lines for each team are essentially equally flat:

For perspective, keep in mind where the Spurs’ line– red on my chart, black on the one above– is situated relative to the rest of the (2014) league. It seems these Spurs and those Pistons were on the same page when it came to playing team-oriented basketball. Meanwhile, Miami is discussing adding Carmelo Anthony for next season. Anthony has been in the top ten in the league for USG% in nine of the past ten years.

It’s time for another ALDLAND Podcast, and this one has it all. There’s NBA playoff coverage, discussion of retirement gifts for Derek Jeter, and even live NFL draft updates that won’t matter by the time you listen to this because you will know who was drafted where already. But I’m sure you would agree that it’s the thought that counts. 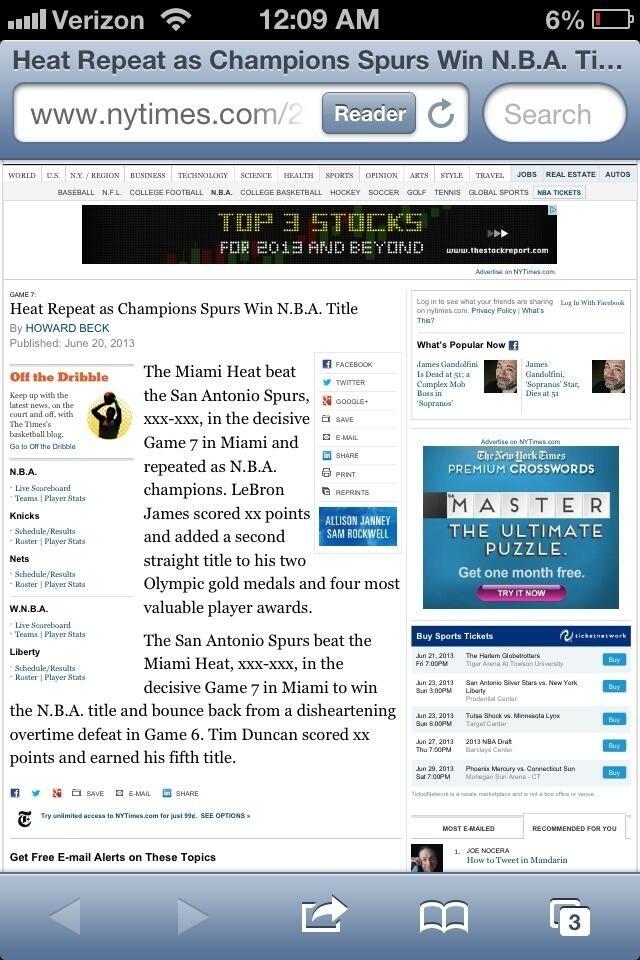 You followed the live blog, now listen to the live podcast. Join Marcus and me as we discuss the NBA FInals DURING the NBA Finals. This is so groundbreaking that your mind might explode! We also talk about college football recruiting and how crazy that is. So crazy. You don’t even know. But you will soon.