Coaching changes are happening everywhere these days, and by everywhere we mean in Detroit and San Francisco or Oakland or wherever the heck Golden State is. And since they are happening, ALDLAND is going to talk about them. But we haven’t forgot college hoops, as we touch on the biggest story of 2014, coming out of New Haven, CT. Come for the basketball, stay for the soccer, which is also here in this podcast too.

Say what you will about the NBA draft process, but it did yield at least one neat result in the pairing of Michigan State alum Draymond Green and Vanderbilt alum Festus Ezeli in the Warriors’ 2012 draft class.

The writers and readers of this site tend to be employed or otherwise disposed during the day such that watching video clips on full volume usually doesn’t happen. If there’s something I really want to hear, I save it for lunch or the end of the day, and I suspect a lot of people do the same thing. This means that there are a lot of us watching a lot of videos– the general tenor of the internet being what it is– on mute. Conventional wisdom suggests that this practice detracts from our experience of these videos. Conventional wisdom also suggests that you never get involved in a land war in Asia, but is Afghanistan even in Asia and anyway that’s not what we’re talking about because the fact is that conventional wisdom can be wrong about videos and about wars (but not about videos of wars), which is why we’re introducing the ALDLAND Silent Film Series.

The concept is simple: some videos are better without sound. Whether they’re made that way or are seen that way for some variation on the modern reality alluded to above, this addition-by-subtraction effect is very real.

The Series’ inaugural feature comes from Oakland, California in 2007. Yesterday afternoon, Amos Barshad included the clip in his possibly prescient (given the Knicks’ loss in Miami last night) contingency plan for the end of Linsanity. It stars a somewhat (i.e., five-years) younger Baron Davis in his role as point guard for the Golden State Warriors, and it comes in the final minutes of a 20+ point win over the visiting Utah Jazz.

I neither am nor aspire to be Chuck Klosterman: a second-by-second analysis of this video hardly seems necessary. Instead, as you watch it (sans audio!, of course), appreciate the silent cinemagic of every shot of Davis, his teammates, Andrei Kirilenko, the fans, and the referee. Sound can improve these visuals in zero ways.

Growing up in Michigan, I knew of Jalen Rose as a member of the Fab Five, that faceless monolith of basketball greatness operating out of the east side of the state. Who these guys were wasn’t as important as the fact of their youth and the color of their socks. You knew you were supposed to be able to name them, and that was that. We soon learned to distinguish Chris Webber, though, if not for his timeout, then for his draft position. I remember his #4 Warriors jersey exploding all over the local sporting goods store. I remember it being the first time I ever knew that there was an NBA team called “the Warriors,” also learning that they played in some geographically mystical place called “Golden State.” Understanding these things became less important when he left after his first year for the Washington Bullets (whose geography I only thought I understood until reading a Sports Illustrated for Kids reader poll about new mascots for that team, which suggested “the Presidents” as one of the alternatives). I knew a couple of the other members played in the NBA– that’d be Rose and Juan Howard– and I knew the other two, Jimmy King (who did have limited NBA exposure, Wikipedia tells me as I write now) and Ray Jackson, played in the CBA, which remained popular on the west side of the state until east-side star Isiah Thomas drove it into the ground. Given our instruction as to their greatness, I at first didn’t understand why they weren’t all NBA all stars, but my concern diminished as my escalating interest in the rival Spartans grew and my interest in the NBA decreased.

It therefore was with some surprise that I began to hear Rose making post-playing-career appearances in the national sports media, first (to my ears) on Jim Rome’s radio show, where the two considered each other “brothers in smack” (not a drug reference), and then as an NBA analyst on ESPN. Later, Rose rode the social media wave, positioning himself as an independent online presence through his Twitter feed and interactive website.

I haven’t been a podcast person– until recently, my lifestyle lacked one of the two alternatively necessary elements: a long daily commute or the structure of a single, working person– which is why I didn’t mention Grantland’s podcast section in my initial assessment of that site. Since then, though, I have attempted to integrate podcasts into my regular media consumption, and so far, only one has stuck (although I did check in with The Solid Verbal during the college football season).

When I saw the announcement about the second episode of the Grantland Network’s “Jalen Rose Show” (the first time it was called that), I didn’t realize it was an actual show or series, and I thought the headline was a reference to Rose’s talkative personality, his ability to carry a segment, a show, a full podcast. Fifteen episodes later, I’m glad I was mistaken.

To give you a flavor of the program, here’s the first of two video clips they have released:

There really isn’t anyone like Rose in sports media today. He is candid, thoughtful, and unintentionally funny. Things he avoid include clichés and directly answering the question asked of him. END_OF_DOCUMENT_TOKEN_TO_BE_REPLACED 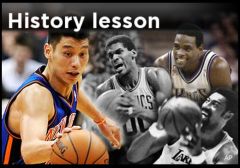 In 1980, the Golden State Warriors traded Robert Parish and a draft pick – used to take Kevin McHale – to the Boston Celtics for a draft pick. The Celtics landed two future Hall of Fame players who would join Larry Bird to form the franchise’s legendary “Big Three.” The Warriors used the draft pick they received in the deal to select … Joe Barry Carroll.

The list of players whose success grew after they left the Warriors is long and paints a not-so-flattering portrayal of the franchise. If you’re on the Warriors’ roster and seeking stardom, history suggests you should head elsewhere.