That’s the expectation of great athletes now. The money is fabulous, the sponsors adore longevity, the science is there, the modern accouterments of success make it easier—the physios, coaches, therapists, nutritionists, private jets and more.

Look at ancient Tom Brady, already back at it. Look at Serena and Venus Williams, chasing greatness into their 40s. Look at LeBron James, pledging to stick around until his own son is playing in the NBA.

Why not? It can be done. And again: The money is fabulous.

Once in a while, however, a great athlete says no more, at an early age, way before they’re due, and they mean it.

That’s what the tennis star Ash Barty did this week, announcing her retirement from the tour at age 25, while still No. 1 in the world, the reigning champion at Wimbledon and her home country’s Australian Open.

While still No. 1 in the world. Let that linger for a moment. Barty’s playing the best tennis of her life. She’d be a favorite in every tournament she played. She isn’t quitting because of a decline in her skill, or any apparent physical injury.

It’s quite the opposite. Barty says she’s simply ready…for what’s next.

“The time is right for me to step away and chase other dreams and to put the racquets down,” Barty said in a short, admirably level-headed interview with her friend and former doubles partner Casey Dellacqua. … Read More

We had a neighborhood block party on Saturday, and we had to work on Sunday, so we missed the women’s final at the U.S. Open and the immediate reaction thereafter. In doing so, it turned out we missed a lot, including a young player’s first major win, and a veteran player’s failed bid for an historic twenty-fourth major win. There was, as such circumstances almost inevitability present, some drama.

After dropping the first set to Naomi Osaka, Serena Williams looked to be back in the mix, down just 4-3 in the second. But she’d already been mixing it up with the match umpire, who eventually charged her with a game penalty, effectively placing the set and the match out of reach for Williams.

For those who did not watch the match, we are reliant on our trusted commentators for assistance in understanding a difficult situation. As a public service, I present two voices. The first belongs to my favorite new tennis writer, Louisa Thomas, who isn’t really new at the game, at least by internet standards. In Thomas’ estimation, the umpire, Carlos Ramos, failed to grasp the moment and severely overreacted, at least in part due to Williams’ identity– not as an all-time champion, but as a woman, and one who is not Caucasian. Public scorn shades Osaka’s ensuing championship moment. The fault, Thomas contextualizes, of Ramos, but mitigated, she explains, by the grace of Williams.

The second voice belongs to one of my favorite sports commentators, Mary Carillo, who, as ever and always, speaks with a clarity that flows from experiential authority:

In the end, reactions from commentators, however experienced or perceptive, are just that: reactions. For Osaka, this was her moment, and, whatever happens from here, no one– Ramos, Williams, the fans in Queens, or anyone else– can take it away from her. For Williams, it’s about what happens next. She’ll try to match Margaret Court’s major-championship record in Melbourne this January. 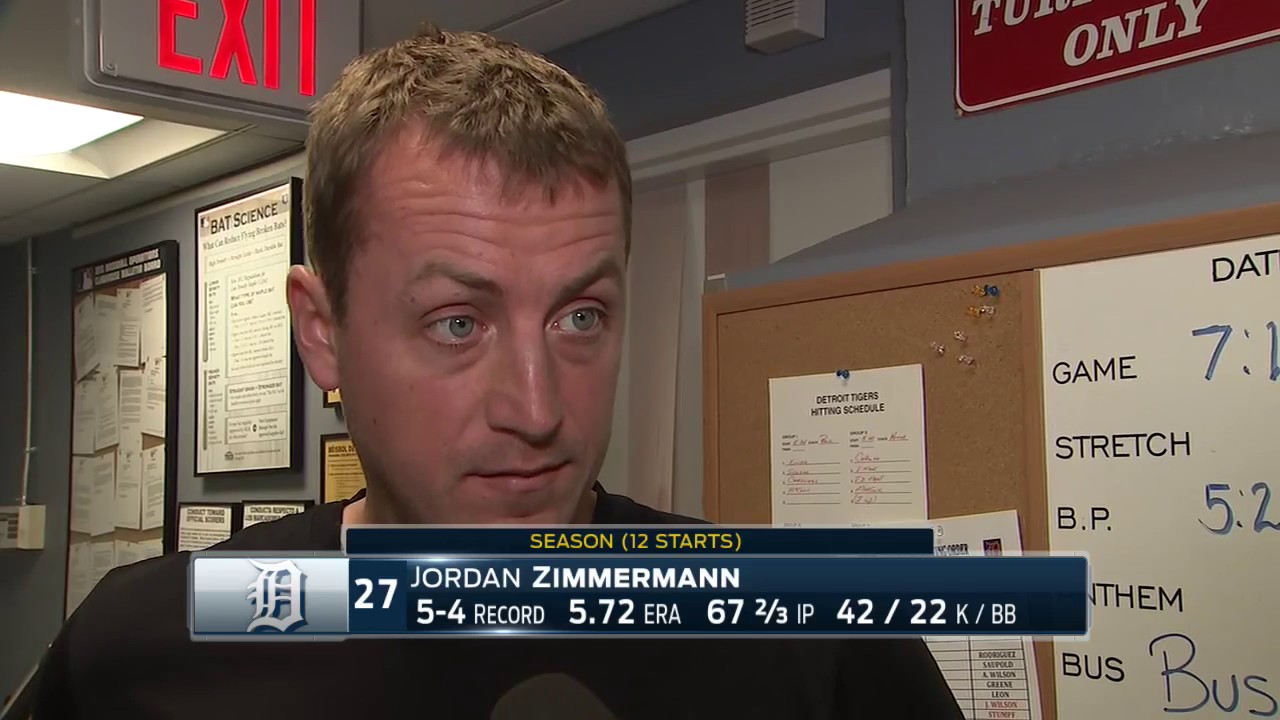 Following an injury-curtailed 2016, 2017 has been anything but the bounceback for which Detroit Tigers starting pitcher Jordan Zimmermann hoped. Little is trending in the right direction or going well for him in the second year of his five-year contract with the Tigers.

According to a recent report, the neck injury that caused Zimmermann to miss time in 2016 is continuing to cause mechanical problems for the pitcher in 2017. One of the consequences is a decreased ability to locate his pitches, and, while he apparently believes the needed adjustments are too significant for an in-season fix, during his most recent start, it sounds like he’d had enough:

He resorted to a quick fix Friday night, so rudimentary it seems almost silly. He wasn’t hitting his spots against the Los Angeles Dodgers’ imposing lineup — he couldn’t get the ball in to lefties, or away against righties — so he tried something he has never done before. In the fifth inning, he moved from the third-base side of the rubber, where he has pitched his entire career, to the first-base side of the rubber.

After giving up six runs over the first four innings, he figured had to try something, anything. He moved a mere five or six inches,

“Basically, I’m on the third base side and I’m missing middle. So if I move over to the middle of the rubber, I’m moving myself over five or six inches, it’s allowing me to get inside for lefties and away to righties,” Zimmermann explained.

It felt strange, but there was some marginal improvement.

Zimmermann said when he threw a fastball in, up and in, it stayed more true. It didn’t run back at all. He struck out Adrian Gonzalez in the fifth inning with three curveballs.

“It feels like I almost had to throw it in our dugout to get to the other side of the plate,” Zimmermann said. “But it went where I wanted it to, so that was the good thing.”

The difference in release points was enough to show up on these Brooks Baseball plots, which show Zimmermann’s 2017 release points excluding his last start followed by the two distinct release points he used in Friday’s game:

I’m highlighting this not because I think it’s any sort of meaningful solution– Zimmermann thinks it helped, and it’s hard to find sufficiently granular data to evaluate in-game strategic shifts like this (his overall zone rate on Friday night actually was slightly lower than his full-season average)– but because it shows how desperate Zimmerman is for any measure of improvement, even a false one. He undoubtedly will work on this in the offseason, but, for now, he’s just like any ordinary person who doesn’t have the time or resources for a proper adjustment and looks for something easy to keep the game going. I recognized the move immediately because it’s what I do when I play tennis. Among many faults in my game is an inability to control the depth of my serves, which usually land well deep of the service box. Some lessons with a professional probably could help identify and correct the problem in my service motion. I have so few opportunities to play, though, that I want to spend them with family and friends, not in a training session with a stranger. That’s why, if I bomb the first serve deep, I just take a couple steps backward and try it again.

Of course, Zimmermann’s more than an amateur who’s given up on his hallucinations of making it as a competitive tennis player, so it will be interesting to see what real changes and adjustments we see from him in 2018, as well as how he positions himself on the mound in his remaining starts this season.

Minutiae, trivia, and the undead rumors of a Justin Verlander trade: welcome to the last six weeks of the Detroit Tigers’ 2017 season.

Related
Getting to know Jordan Zimmermann in context

Its disciples consider tennis to be a cosmopolitan game. Played and watched by men and women a cut above the average “jock” and “fan” of other big time sports. The facts giving rise to this action make it eminently clear however that a fair amount of “Roller Derby etiquette” has found its way to center court.

Defendant, John McEnroe, is a professional tennis player. The best player in the world today, he is not noted for his court decorum. . . .

Judge Becker nevertheless ruled in McEnroe’s favor on all counts, issuing a brief and delightfully worded order that is available in full right here.

Hey, football is a thing that’s happening, and my latest post for TechGraphs reflects that, highlighting news stories about the NFL, tennis, baseball, and even a hint of hockey.

A collaborative effort this week, my latest post for TechGraphs highlights news stories from the worlds of golf, hockey, tennis, football, bionic sports, and more.

Wimbledon began today, and my latest post at TechGraphs highlights a number of the digital developments in action surrounding this year’s tournament, including streaming video and a probably far-flung attempt to measure the emotion surrounding the event.

Sania Mirza had offended Islam. Such was the judgement of a group of Muslim clerics. It was September of 2005, and Mirza, then 18 years old and the No. 34-ranked tennis player in the world, was on her way to Kolkata, India to play in the Sunfeast Open.

Then came the fatwa. It would be Mirza’s first brush with radical Islam, but not her last.

Issued by Haseeb-ul-hasan Siddiqui, a leading cleric with the little-known Sunni Ulema Board, the religious order demanded that Mirza, a practicing Muslim, stop wearing “indecent” clothes to play tennis.

Instead of standard-issue t-shirts and skirts, the board ruled, she should wear long tunics and headscarves, like a group of female Iranian badminton players. Or else.

“She will be stopped from playing if she doesn’t adhere to it,” Siddiqullah Chowdhry, a cleric with a Kolkata-based Muslim group Jamiat-e-Ulama-e-Hind, told Reuters. The threat was vague, but still alarming. … Read More