Wimbledon began today, and my latest post at TechGraphs highlights a number of the digital developments in action surrounding this year’s tournament, including streaming video and a probably far-flung attempt to measure the emotion surrounding the event.

Most jr.-tennis coaches are basically technicians, hands-on practical straight-ahead problem-solving statistical-data wonks, with maybe added knacks for short-haul psychology and motivational speaking. The point about not crunching serious stats is that Schtitt . . . knew real tennis was really about not the blend of statistical order and expansive potential that the game’s technicians revered, but in fact the opposite — not-order, limit, the places where things broke down, fragmented into beauty. That real tennis was no more reducible to delimited factors or probability curves than chess or boxing, the two games of which it’s a hybrid. In short, Schtitt and [Incandenza] found themselves totally simpatico on tennis’s exemption from stats-tracking regression. Were he now still among the living, Dr. Incandenza would now describe tennis in the paradoxical terms of what’s now called “Extra-Linear Dynamics.” And Schtitt, whose knowledge of formal math is probably about equivalent to that of a Taiwanese kindergartner, nevertheless seemed to know what Hopman and van der Meer and Bollettieri seemed not to know: that locating beauty and art and magic and improvement and keys to excellence and victory in the prolix flux of match play is not a fractal matter of reducing chaos to pattern. Seemed perversely — of expansion, the aleatory flutter of uncontrolled, metastatic growth — each well-shot ball admitting of n possible responses, n^2 possible responses to those responses, and on into what Incandenza would articulate to anyone who shared both his backgrounds as a Cantorian continuum of infinities of possible move and response, Cantorian and beautiful because infoliating, contained, this diagnate infinity of infinities of choice and execution, mathematically uncontrolled but humanly contained, bounded by the talent and imagination of self and opponent, bent in on itself by the containing boundaries of skill and imagination that brought one player finally down, that kept both from winning, that made it, finally, a game, these boundaries of self.

Imagine if basketball, football or hockey games were decided by which team outscored the other in the most periods. Get outscored by 20 points in the first quarter, and it’s no problem, you just have to eke out the last three by a point each to take the game.

That’s sort of how tennis works. Win more sets than your opponent, and you win the match — even if your opponent played better throughout. These anomalous results happen rarely, but more often on grass, the surface of play at Wimbledon, which started this week.
…
Wacky outcomes like [Rajeev] Ram’s pair of lottery matches happen more often at Wimbledon than at the other Grand Slams. Since 1991, 8.8 percent of completed Wimbledon men’s matches have been lottery matches, won by the player who was less successful at protecting his serve than his opponent. At the other three Grand Slam tournaments, that proportion ranged between 6.4 percent and 6.6 percent, according to data provided by Jeff Sackmann of Tennis Abstract.
…
The sport’s time-tested scoring system has many virtues, even if total fairness isn’t one of them. Its symmetry makes players alternate the deuce and advantage sides, switch sides of the net, rotate serving and returning. It guarantees that a player trailing by a big margin gets all the time it takes to stage a comeback, provided she performs well enough to earn that time. It keeps matches that are lopsided short, and lets close matches take all the time they need.

Part of the reason baseball is so susceptible to statistical analysis is that the season is long enough for players’ and teams’ statistical averages to settle out and meaningfully describe their performance. Another reason is that the game itself is comprised of isolated interactions. No other sport is so susceptible, but the reasons appear to be different in each case. Basketball may be next up, held back only by our (diminishing, thanks to technology) inability to track and store data. Hockey statistics are thought to be less meaningful because the season isn’t long enough for the random bounces of the puck to settle out from the averages.

To my poorly informed knowledge, advanced statistical analysis has made few inroads into tennis. Part of the reason for this may be that tennis’ scoring structure, alluded to in the second passage above, does not as easily allow for the clean, direct reflection of averaged rates of good things or bad things in individual (and therefore aggregated) match outcomes. On the other hand, maybe looking to a statistical rationale for an explanation of statistics’ inability to aid in the understanding of tennis is futile. Or at least I think that’s what the first passage means.    END_OF_DOCUMENT_TOKEN_TO_BE_REPLACED 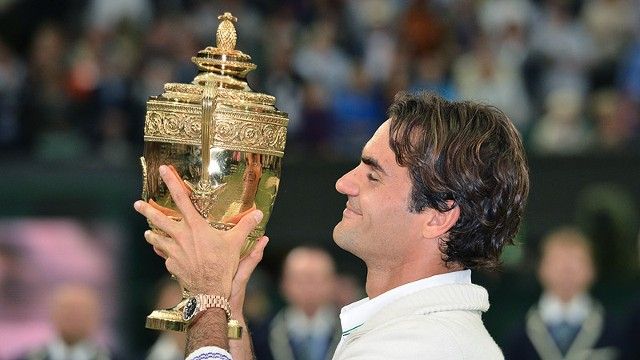 But it’s so fragile, tennis! I mean, it’s so silly, basically. I have been a completely inadequate Wimbledon correspondent, and even I noticed when the All England Lawn Tennis and Croquet Club’s P.A. announcer came on to say, “Ladies and gentlemen, your attention, please. There is a 30 percent chance that it is now raining.” The kidnapped hawk, the Centre Court roof, and Roger Federer all have fake Twitter accounts that are only intermittently as funny as the actual Wimbledon Twitter account, @Wimbledon, which I suspect has a better sense of humor about Wimbledon than does Jeremy Piven. I’ve hardly understood a single thing that’s happened since I’ve been here. Why, the other night I wandered into the actual English pub next to my hotel for a burger and a drink, and there was some sort of American-themed costume party going on — all sorts of Marilyns and Duff Men and Top Gun jet aces, that sort of thing — and I was wearing a shirt with the name of an obscure Italian soccer club on it, and I got pitying looks for not being comically American enough! … Read More