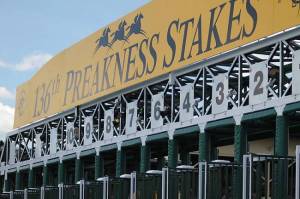 Baltimore has filed a lawsuit seeking to use eminent domain to take Preakness Stakes horse race and the Pimlico racetrack, where the race is held. . . .

The Preakness is one of the Triple Crown horse races (along with Belmont and the Kentucky Derby) and therefore one of the most significant events in American horse racing. The condemnation is legally questionable. But even if the city wins the lawsuit and succeeds in taking over the Preakness, it is likely to end up a loser. … Read More

(via The Volokh Conspiracy)

Last night, the New York Yankees completed what to this point constitutes the second-most significant trade of the month when they sent three prospects to Baltimore in exchange for a few months of closer Zach Britton’s services.

The Orioles drafted Britton out of high school in 2006, and Britton debuted five years later as a full-time starter for Baltimore in 2011. By 2014, he had transitioned to a full-time bullpen role, and my earliest memories of him date to two years after that.

Britton was a key part of the 2016 Baltimore team that finished second in the AL East and made the postseason as a wild card. That was the Orioles’ last playoff appearance, and manager Buck Showalter’s decision not to use Britton as the win-or-go-home contest went into extra innings granted the game an air of infamy.

Prior to that, writer Ben Lindbergh memorably made the case that Britton, a closer who would pitch sixty-seven innings that season, merited serious consideration for the AL MVP award. As recorded contemporaneously in these digital pages, Lindbergh’s argument was based on a modification to the notion of Win Probability Added (WPA):

Earlier today, Ben Lindbergh argued that Baltimore reliever Zach Britton has a claim to the 2016 AL MVP award. To make that case, Lindbergh demonstrated that Britton had done more than any other player to help his team win games that mattered. Lindbergh did this by placing Britton’s performance in the context of the individual games in which Britton pitched– did Britton’s actions help or hurt his team’s chances of winning that game, and to what degree did they do so?– and then placing those games in the context of his team’s position in the playoff hunt. Viewed this way, Britton (excellent contributions to a good team in close contention) is more valuable than, for example, Mike Trout (superlative contributions to a bad team far out of contention). The metric that captures this contextual performance concept is called Championship Probability Added (cWPA), and Britton currently holds a commanding lead atop that leaderboard.

The road has been a bit rough for Britton since that 2016 season, however, as the trade article linked above summarized:

After consecutive two-win seasons in 2015 and 2016, he has missed time with the following injuries:

The lefty returned to action on June 12 but hasn’t been lights out like he was before 2017, with a 4.43 FIP and 3.45 ERA thus far. He’s been a bit better of late, tossing eight straight scoreless outings, but has still produced just six strikeouts against four walks in that span. Perhaps more encouragingly, his velocity is up over his last few outings, getting closer to the 97 mph sinker he used to throw. If the velocity return is here to stay, better results might follow.

By a clear margin, Britton led all pitchers in WPA in 2016. This year, however, he’s nowhere to be found atop that list. That no team has done as little winning as Baltimore (record: 29-73) likely contributed to that shift. Still, the fact that he has a negative WPA (-0.13) for the first time since he moved into the bullpen seems worth noting in light of the foregoing.

As the block quotation immediately preceding the immediately preceding paragraph indicates, there are a number of red flags that suggest that the version of Britton the Yankees acquired (insert reference about Redcoat POWs) last night may be meaningfully different from the one who presented an intriguingly compelling case for consideration as the most valuable player in the American League in 2016.

Every MLB team is in action beginning at 3:00 this afternoon for the final* day of the 2016 regular season. Before heading down to Turner Field to catch the Tigers and say farewell to baseball in downtown Atlanta, I was a guest on today’s episode of the Banished to the Pen Podcast, in which I rambled about wild card scenarios and made severely underinformed playoff predictions.

* Final as to all except Detroit and Cleveland, which likely will need to play a makeup game tomorrow.

Do you know who owns these two Super-Bowl-winning quarterback stat lines?

I’ll give you a hint:   END_OF_DOCUMENT_TOKEN_TO_BE_REPLACED

Back in February, before the 2015 MLB season started, I wrote that the projected-to-be-terrible Philadelphia Phillies should just give up and put themselves out to pasture. They did not immediately heed my advice. Nearly four months later, the team found itself with a 22-44 record, the worst in all of baseball. Cue the terminal sequence: END_OF_DOCUMENT_TOKEN_TO_BE_REPLACED

One of the marks of a smart baseball writer is the ability to sense a trend, research its existence and nature, place her findings in context, and present her conclusions in a way that meaningfully educates readers. Inherent in this ability is the wherewithal to know when to stop researching a trend or pressing on a concept, realizing that the fruits of the work have been or soon will be exhausted. Sometimes a person who is not a “smart baseball writer” by the foregoing definition will noodle about on an idea for so long, he’ll end up with a small pile of research that no longer has any bearing on any meaningful conclusions.

Two years ago, I decided to investigate a hunch that the Detroit Tigers were having trouble scoring runs late in games. My initial research mostly seemed to support my hypothesis, and a follow-up look appeared to confirm it more strongly. More than merely interesting (and fleetingly self-satisfying), it also was informatively concerning, because it placed the team’s well-known bullpen problems in a more nuanced light: relief-pitching woes alone weren’t the problem, because the lack of late-game scoring was compounding the problem of surrendering leads during the final frames. As strange as it seemed, the Tigers had interrelated shortcomings on both sides of the plate.

One comment I received in the course of sharing those findings stuck with me: I needed to place this information in context. After all, there are plausible reasons to believe that all teams might, perhaps to varying extents, experience decreased run production in the late innings.

The award for the fewest rushing yards allowed by a team in a regular season goes to the 2000 Ravens* anchored by linebacker Ray Lewis. The Ravens allowed a paltry 970 yards on the ground to pick up an impressive 12-4 regular season record. Oh, and this same defense went on to win Super Bowl XXXV as well.

The Lions are nearly on track to break this record.

Let’s take a look at the numbers. Through 13 games, the Lions have allowed 817 yards on the ground. The three remaining regular season games are against repeat foes; in fact, they are against all of the other teams in the NFC North.

The last time the Lions played the Vikings, Bears, and Packers, Detroit’s defense gave up a meager 69, 13, and 76 yards respectively. If we can expect a repeat performance then the Lions are set for 975 allowed rushing yards on the season – just five more than the NFL-best 2000 Ravens.

Of course, teams change throughout the season. Let’s look at some trends. The Lions do better at home than away: about 25% better than average when home and 25% worse than average when away. This isn’t too surprising. We can also look at how the Lions defense has done lately. In the last three games (Patriots, Bears, Bucs) the Lions have done better than their average, even when accounting for the fact that two of those games were in Detroit. On the other hand, all three of the latest teams rank in the bottom half of the NFL in rushing production this year, coming in 21st, 26th, and 31st, respectively, so perhaps a slight boost in recent statistics shouldn’t be taken too seriously.

Could the Lions do it? Maybe. It looks like they will be about right on track. I would probably estimate a little bit more than 970 yards allowed on the ground.

And who knows, maybe Rodgers takes a knee on the last play of the Lions regular season (hopefully because the Lions are already up by 28) and that takes Detroit to 969 rushing yards allowed.

*Other teams have allowed fewer rushing yards in a season, but since the move to a standard 14 game season in 1961, no team has done better per game than the 2000 Ravens.

In news today that was mostly (but not totally) condemned as tone-deaf and inappropriate, the NFL suspended Baltimore Ravens running back Ray Rice for two games, but no preseason games, practices, or training camp activities, and docked his pay for a third game, for beating his then-fiancee, Janay, until she was unconscious and dragging her out of an elevator at an Atlantic City casino this February. That the NFL has a serious domestic abuse problem became frighteningly clear at Rice’s post-beating press conference (which I unfortunately had to highlight here). Today’s mild sanction did nothing to change that nauseating narrative.

Deadspin put together a list of “other notable NFL suspensions,” which offers some context for Rice’s two-game sanction. If you want to read the list, with all of the details and circumstances, it’s available here. I’ve attempted to distill the list to the basics below.    END_OF_DOCUMENT_TOKEN_TO_BE_REPLACED 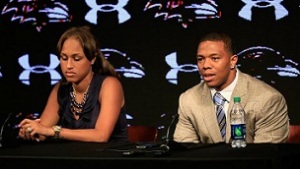 Why would she marry him?

It’s the natural question that arises after watching the video of Baltimore Ravens running back Ray Rice dragging the unconscious body of Jenay Rice from the elevator where he knocked her out. Then his fiancée — the video was taken in mid-February before their wedding later that month — on Friday she stood by him as his wife for a stomach-flipping press conference. The disgust starts with the monstrous obliviousness of Ray Rice’s stating, “Failure is not getting knocked down, but not getting up,” and ends with Jenay Rice sharing the blame for his unconscionable crime. That so many wonder how this situation could end with Rice easily avoiding jail time and marrying the woman he battered betrays the willful ignorance of a society that enables him.

Violence is how abusers keep their victims from escaping. Wondering why Jenay Rice would stay requires a focused ignorance of a world in which roughly one third of murders against women are committed by an intimate partner. In this world, the threat of death, expressed or implied, can keep anyone captive.

Ray Rice, the Baltimore Ravens and the NFL have seemingly normalized domestic violence as a learning experience for the abuser. Apparently, the crime isn’t the crime itself, but failing to offer a mawkish homily on how the crime made you a better person. The future of domestic violence in sports is here now. … Read More

(via Sports On Earth)