The home-run ball in question landed in the seats beyond left field and was nabbed by a twenty-something guy who had just arrived at the park for the day game with his friends and, I initially thought from the replay editing, immediately traded the ball for a Little Caesar’s Hot’n’Ready and a Two Hearted. An in-game interview on the telecast soon revealed that my initial thought was incorrect: he still had the ball and, in fact, planned to keep it. He has a relative who is a big fan of the Cardinals, Pujols’ prior team, and he was thinking about giving it to him. As news spread about the benchmark RBI, the story of the man who had the ball in question– and, more specifically, the fact that he had expressed an initial intention to retain that ball– got swept up along with it. Reports indicated that the man had turned down an offer to meet with Pujols, presumably for the purpose of exchanging the ball for other memorabilia. The Tigers’ public-relations team even instigated itself into the conversation in a strange and seemingly unsolicited fashion. The man subsequently reported that team officials treated him poorly. Two themes appeared to prevail in the public response: 1) the man should have taken the meeting with Pujols to exchange the ball for other items and 2) his refusal to do so would have financial consequences for him.   END_OF_DOCUMENT_TOKEN_TO_BE_REPLACED 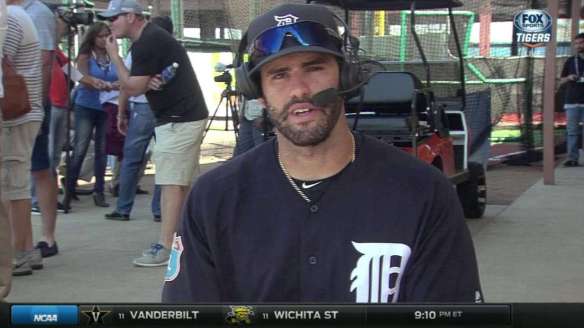 He’s only twenty-five years old, but Mike Trout is the best player in baseball today and one of the best ever. There’s only one of him, though, and he’s under contract with the Angels through 2020, which means that your team can’t have him anytime soon, and, unless your team is the Yankees or Dodgers, it probably can’t afford him once he hits free agency either. If you don’t and won’t ever have Trout himself, your only option is to make like the post-Jordan NBA and find the next Trout. Everybody wants to be like Mike.

The Detroit Tigers, for example, really could use a guy like Trout. They haven’t done much this offseason, and they’re in need of a center fielder. Of course, they had a decent center fielder in 2016 in Cameron Maybin, but the team “traded” him to the Angels as soon as the season was over and, surprise, the Angels didn’t send Trout, who also plays center, to the Tigers in return.

While the hole in the middle of the outfield currently remains unaddressed (the team’s very recent acquisition of Mikie Mahtook notwithstanding), another anticipated outfield move that Detroit has not yet made is trading right fielder J.D. Martinez, who will be a free agent after this coming season. Martinez has been very good since the Tigers acquired him from Houston, and, assuming he returns to form following his elbow injury last season, he will earn a payday next offseason beyond what the Tigers likely will want to offer.

Before Martinez inevitably departs the Motor City, it’s worth taking another look at what exactly the Tigers have in their young right fielder, and, bold as it may seem, asking whether he’s the next Trout.

On one hand, the answer obviously is no. Martinez, in his best season, was, by whichever WAR metric you prefer, about half as valuable as Trout was in his best. There also is the matter of age: while we’d expect The Next Trout to be younger than Trout, J.D. is four years older than Mike.

On the other hand, anyone who’s followed Martinez’s career knows that he was reborn as a hitter after he left Houston for Detroit, creating a bit of deception in his developmental track (I’m sure he doesn’t spend much time thinking about those first three MLB seasons), even if the aging clock ticks on.

Imagining, for purposes of this strained and fabricated narrative, that this “young” Martinez was coming up behind the more experienced Trout, we might also notice that the two outfielders have similar batting profiles.

This afternoon, Baseball Savant creator Darren Wilman tweeted a link to a chart comparing hitters according to their batted ball exit velocity and slugging percentage: 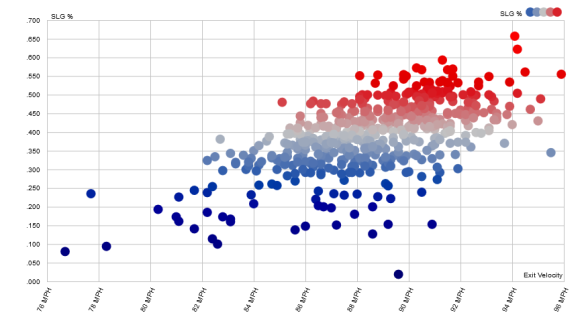 Right there next to each other at the top of the curve are Trout and Martinez. (Click below to see more precise indications of their positions.) 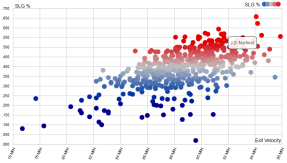 Everyone knows Trout and Martinez are power-hitting outfielders, but I still was surprised to see how close Martinez was to Trout on this graph. Martinez’s overall value suffers because he plays an easier position than Trout, and, although his defense showed marked improvement in 2015 (before the improvements evaporated in his broken-elbow season last year), plays it less well than Trout plays his. Still, if I’m Martinez’s agent, a chart showing that my client hits– in terms of exit velocity and extra bases– just like Trout is going to be on page one of the Boras Binder I’m distributing this offseason. And if I’m Tigers GM Al Avila, I’ll make sure every potential trade partner this summer catches a glimpse of it too.

Sure, some still want Detroit to make another all-in push in 2017, but the proverbial contention window is hanging as heavy and tenuously in its frame as it ever has for this crew, and it’s tough to imagine a world in which they can retain Martinez. In five years, after seeing him mash in pinstripes or Dodger blue, Tigers fans may look back and see Martinez’s delayed, Trout-esque offensive prime as one of the largest costs of their now-overleveraged roster.

One of the marks of a smart baseball writer is the ability to sense a trend, research its existence and nature, place her findings in context, and present her conclusions in a way that meaningfully educates readers. Inherent in this ability is the wherewithal to know when to stop researching a trend or pressing on a concept, realizing that the fruits of the work have been or soon will be exhausted. Sometimes a person who is not a “smart baseball writer” by the foregoing definition will noodle about on an idea for so long, he’ll end up with a small pile of research that no longer has any bearing on any meaningful conclusions.

Two years ago, I decided to investigate a hunch that the Detroit Tigers were having trouble scoring runs late in games. My initial research mostly seemed to support my hypothesis, and a follow-up look appeared to confirm it more strongly. More than merely interesting (and fleetingly self-satisfying), it also was informatively concerning, because it placed the team’s well-known bullpen problems in a more nuanced light: relief-pitching woes alone weren’t the problem, because the lack of late-game scoring was compounding the problem of surrendering leads during the final frames. As strange as it seemed, the Tigers had interrelated shortcomings on both sides of the plate.

One comment I received in the course of sharing those findings stuck with me: I needed to place this information in context. After all, there are plausible reasons to believe that all teams might, perhaps to varying extents, experience decreased run production in the late innings.

With a shutout win over the Dallas Stars in the final game of the regular season Saturday night, the Detroit Red Wings extended their playoff streak to twenty-two years, continuing the longest active postseason streak in all of professional sports. Their immediate reward? A seven seed, and a matchup against the high-flying Anaheim Ducks, beginning late tonight in Southern California.

Before the puck drops this evening, check out what Grantland has identified as the top five moments of the past twenty-one years of Red Wings playoff appearances.

Sunday at Comerica Park in Detroit featured a premiere MLB pitching matchup between the Los Angeles California Angels of Anaheim’s bemulletted Jered Weaver and the Tigers’ Justin Verlander. Although the Tigers won, it was Verlander who took heat for some of his post-game remarks.  END_OF_DOCUMENT_TOKEN_TO_BE_REPLACED