The home-run ball in question landed in the seats beyond left field and was nabbed by a twenty-something guy who had just arrived at the park for the day game with his friends and, I initially thought from the replay editing, immediately traded the ball for a Little Caesar’s Hot’n’Ready and a Two Hearted. An in-game interview on the telecast soon revealed that my initial thought was incorrect: he still had the ball and, in fact, planned to keep it. He has a relative who is a big fan of the Cardinals, Pujols’ prior team, and he was thinking about giving it to him. As news spread about the benchmark RBI, the story of the man who had the ball in question– and, more specifically, the fact that he had expressed an initial intention to retain that ball– got swept up along with it. Reports indicated that the man had turned down an offer to meet with Pujols, presumably for the purpose of exchanging the ball for other memorabilia. The Tigers’ public-relations team even instigated itself into the conversation in a strange and seemingly unsolicited fashion. The man subsequently reported that team officials treated him poorly. Two themes appeared to prevail in the public response: 1) the man should have taken the meeting with Pujols to exchange the ball for other items and 2) his refusal to do so would have financial consequences for him.   END_OF_DOCUMENT_TOKEN_TO_BE_REPLACED

Welcome to a very special ALDLAND Podcast this week as old favorite and one time co-host Chris Cunico returns to discuss a variety of topics with yours truly and Marcus. On tap this week is the boring slog that is the NFL preseason, discussion of Clint Dempsey’s move to the MLS and one final steroid suspension talk (we promise we’re done after this). Bonus: technical problems!

Download the ALDLAND podcast at our Podcasts Page or stream it right here:
[audio https://dl.dropboxusercontent.com/u/73353635/Podcast%2040.mp3]

The middle of July is one of the slowest times in sports, but the MLB came through by banning Ryan Braun for the remainder of the season for violating its drug policy and provided us with more than enough fodder for a podcast. Listen as Marcus and I discuss the Braun story and related subplots, as well as our thoughts and advice on workout gear and a recap of Lefty’s big win in Scotland.

Technical difficulties and general laziness are a good combination for going two weeks without a podcast. Fear not, dear listeners, as one of the two of those issues has been fixed and a brand new ALDLAND podcast is available for you to take in. Join Marcus and I as we preview the NBA finals, discuss the latest in MLB steroids news, and take a look at our preseason World Series picks.

I have no doubt that taking a baseball traveling 80-100 mph to the wrist would make me act in a way of which I would not be proud. Knowing that, I’ve chosen not to pursue a career as a professional baseball player. (My little league batting average also was an early warning sign.) Still, there’s something about this image that really cries out to the essence of A-Rod: 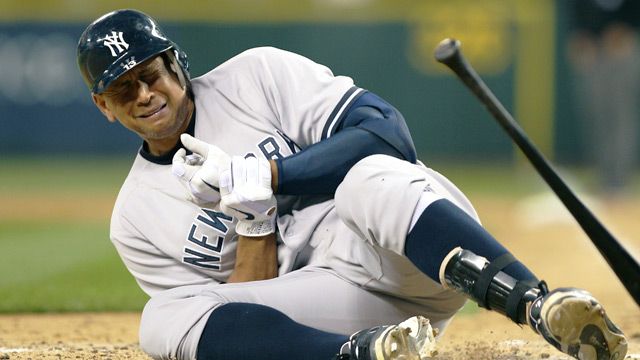 I don’t follow him closely, but this is easily the most A-Rod image since this, or maybe this (not counting those glamor shots, of course).

These days, over Bryant’s right wrist also rests a fat postgame ice wrap roughly the size of rookie guard Andrew Goudelock, Bryant trying in vain to minimize swelling after acting on the court as if there isn’t a torn ligament in there.

Bryant has been taking a numbing injection to that wrist before every game in hopes of performing normally. Yes, it’s that bad.

He does not want to publicize all the details of his wrist, which is usable only because the bones were not moved permanently out of alignment without the ligament to hold them in place. But it’s now clear just how problematic the wrist is, and it’s fair to wonder where all this will take Bryant.

Bryant walked out of Staples Center on Tuesday night with something that looked like an oven mitten over his right hand and wrist. He wears an immobilizing brace over the wrist when off the court, meaning take-for-granted parts of life such as texting on his phone or zipping his fly become rather challenging.

I’m not sure if the fly-zipping example was a reference to the alleged infidelities that allegedly led to his recent, actual divorce proceedings, and I also am not here to offer any speculation on what’s going on with the German doctor who treated Bryant and Alex Rodriguez.

My question has to do with the wrist injections, referenced above, that “numb the pain and allow Bryant to perform normal tasks, such as ball handling and shooting“: why isn’t this injected substance a performance-enhancing drug?

END_OF_DOCUMENT_TOKEN_TO_BE_REPLACED

From the front page of the USA Today sports section:

The New York Yankees third baseman is being investigated by Major League Baseball for participating in illegal poker games and could face suspension.

“We take this very seriously and have been investigating this matter since the initial allegation,” MLB spokesman Pat Courtney said in a statement. “As part of the investigation, the commissioner’s office will interview Mr. Rodriguez.”

Wednesday, RadarOnline.com alleged that drugs were used in one game, and that another game organized by Rodriguez ended when a fight not involving the slugger nearly broke out. RadarOnline.com cited unnamed “eyewitnesses.”

One subsequent article states that A-Rod faces a risk of suspension, while others report questioning of the initial story by A-Rod’s publicist and others.

In the big game of baseball legacies, Rodriguez already has two strikes against him and is fouling off pitches due to admitted steroid use, a soft reputation on the field, and a sometimes misguided personal life away from the diamond. But what if it was a gambling problem that actually knocked him out?

While there are no allegations A-Rod gambled on baseball or any other sport, it’s Pete Rose’s gambling issue alone that’s keeping him out of the hall of fame. (For more on the baseball hall of fame’s potential anomalies, click here.) Charlie Hustle has all sorts of support, even given his gambling issue. It’s tough to imagine many people clamoring in A-Rod’s defense were this yet-unexplored potential gambling issue to blow up for him. If gambling put Rodriguez out of the game and the hall, it would be the only thing he and Rose had in common.