The home-run ball in question landed in the seats beyond left field and was nabbed by a twenty-something guy who had just arrived at the park for the day game with his friends and, I initially thought from the replay editing, immediately traded the ball for a Little Caesar’s Hot’n’Ready and a Two Hearted. An in-game interview on the telecast soon revealed that my initial thought was incorrect: he still had the ball and, in fact, planned to keep it. He has a relative who is a big fan of the Cardinals, Pujols’ prior team, and he was thinking about giving it to him. As news spread about the benchmark RBI, the story of the man who had the ball in question– and, more specifically, the fact that he had expressed an initial intention to retain that ball– got swept up along with it. Reports indicated that the man had turned down an offer to meet with Pujols, presumably for the purpose of exchanging the ball for other memorabilia. The Tigers’ public-relations team even instigated itself into the conversation in a strange and seemingly unsolicited fashion. The man subsequently reported that team officials treated him poorly. Two themes appeared to prevail in the public response: 1) the man should have taken the meeting with Pujols to exchange the ball for other items and 2) his refusal to do so would have financial consequences for him.

My instinctual reaction was to feel for the man’s position, with regard both to the pressure immediately placed upon him and the sense that he might have a noneconomic desire to retain the ball. I also had a sense that, someone in his position accepting the player meeting is the functional equivalent of agreeing to give up the ball; in other words, I don’t think anyone in his shoes who says yes to meeting with Pujols will then tell Pujols to his face that Pujols can’t have the ball, regardless of his intent with respect to the ball prior to deciding whether to meet. The public seemed to be against the man, though. I wanted to find out for certain and so conducted a rigorous, statistically significant survey, which yielded the following result: 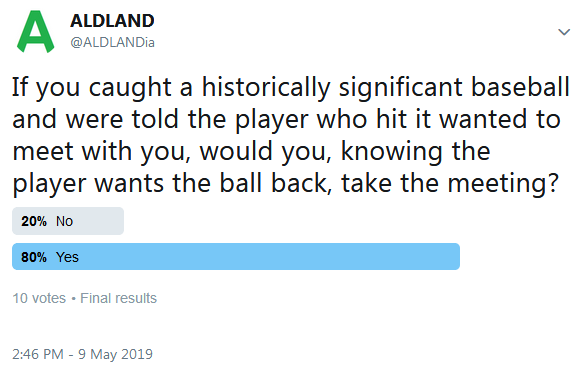 One of the survey participants later told me he incorrectly cast a “no” vote and meant to cast a “yes” vote. You can do the math from there.

Due to the authentication issue, a region of shallow, muddy water into which I wish not to wade, it seems that most people would trade the historically significant ball for a basket of generic baseball items distinguished only in the fact that they bear the player’s signature.** I don’t mean to diminish the significance of autographed memorabilia; indeed, I have received a signed jersey and ball that probably are my most-prized sports possessions. They are special, difficult to acquire, and represent a closer connection to the sports and players about which and whom we care.

The Pujols baseball from last week is, in some ways, something entirely different, particularly with respect to uniqueness and, of course, historical significance. Consider that there is only one such baseball in the entire world. Or, to encompass all players who ever accomplished the feat, consider that there are only five such baseballs in the entire world.

Except there probably aren’t even that many. Two of the players who achieved the 2,000-RBI threshold– Babe Ruth and Cap Anson– did so before the birth of that statistic, so no one would have any reason to know what they had done at the time. That puts us back at three. Hank Aaron achieved the feat in 1972 by way of a home run. Alex Rodriguez achieved the feat in 2015 by way of a home run. According to a probably legitimate website, the Aaron ball, autographed by the Hammer, sold at auction in 2014 for $4,481.25. According to me based on my review of the video clip linked in this paragraph, the Rodriguez ball, which bounced back onto the field, is in the possession of Rodriguez, the Yankees, MLB, or the Hall of Fame. That means there are, at most, only two of these items in the wild and, of course, only one hit by Pujols.

It isn’t difficult for me to understand the mindset that would make one want to hold onto such an item. The only thing that would give me pause is if Pujols wanted it. If Pujols really wanted it, and it’s hard to get a read on that here, then I think that would be a consideration to weigh. As another respondent to my methodologically sound poll reminded, a particular fan may find his or her opinion changed according to his or her feelings about the specific player involved. Otherwise, though, I’m all for fans hanging onto special items of historical significance like this one.

UPDATE: After having a night to sleep on the matter, the man who caught the baseball has changed his mind and decided he will give it to Pujols or the Hall of Fame:

“I slept on it,” Hydes told The Detroit News over the phone on Friday night. “All I ever wanted was to sleep on it. I slept on it and I woke up and I think (Pujols) is a class act.

“I reconsidered. One-hundred percent, I’m either going to give it to Pujols or to the Hall of Fame.”

And before you ask, no, this isn’t a cash grab.

Hydes turned all that down, in large part, he said, because he felt the Tigers were pressuring him to turn the ball over. A “hard sell,” Hydes said.

The Tigers disputed that Thursday, and again Friday in a statement from vice president of communications Ron Colangelo, who was not present for the interactions between Hydes and Tigers staff on Thursday.
…
Hydes originally thought he might give the ball to his brother, a lifelong fan of the St. Louis Cardinals (Pujols’ first team), or Ely’s soon-to-be-born child.

He never did decide; he just knew he was going to hold on to the ball — the first ball he’s ever caught at a major-league game — because, he felt, the Tigers’ staff tried too hard to get him to give up the ball.

The Tigers staff, Hydes said, told him repeatedly they couldn’t authenticate the ball — balls into the stands can’t be officially authenticated because of chain-of-custody concerns — and therefore the ball was worthless on the open market. That pitch backfired, as Hydes felt insulted that they assumed it was all about the money to him.

Hydes, though, was impressed after the game — a 13-0 Angels win over the Tigers — when Pujols was very gracious, saying it was Hydes’ right to keep the baseball.

And that seemed to sway Hydes’ decision, and he’s trying to reach out to Pujols to find a way to get him the ball. …

I respect the process. Sometimes people just need a little time to think.

* Statistics current as of the moment I looked them up, which, in this instance, was a few days ago.

** Ok, one quick comment on authentication, which pertains to the idea that authentication must happen while the person in possession of the item remains in the stadium. If the concern is that the person will leave and then acquire some other baseball to substitute for the important one, that concern misses the possibility that the person likely can do that without leaving the park. The better approach would be for officials to authenticate the ball right away and then let the person in possession make his or her decision with respect to alienation thereof.