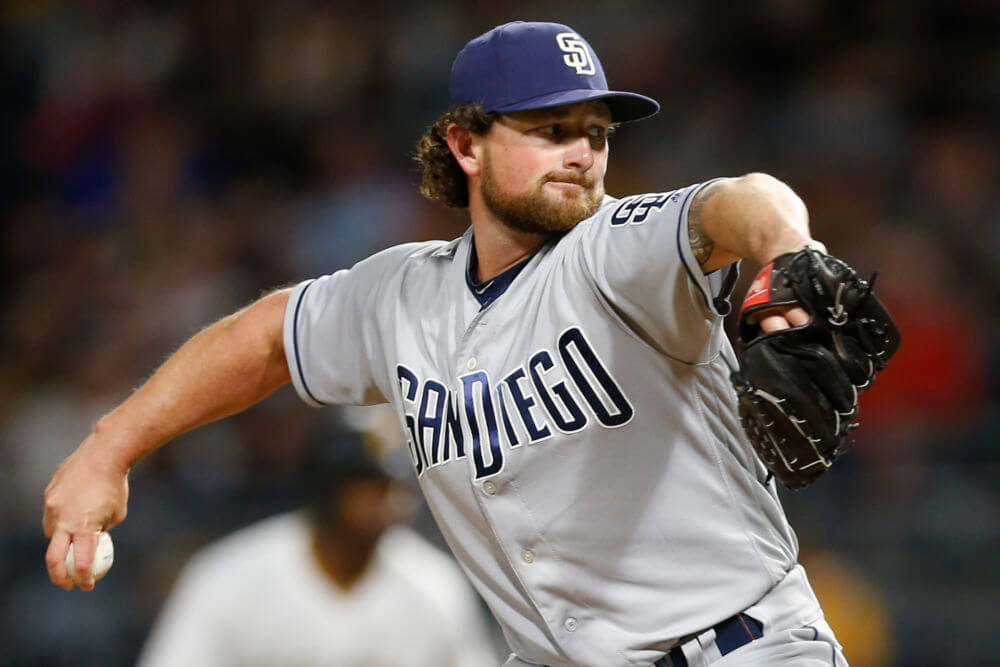 Unsurprisingly, these guys appear at the top of a lot of leaderboards right now, including the FanGraphs combined WAR leaderboard, by which measure Bellinger (3.0 fWAR) just completed a month tied with August 2002 Barry Bonds for the third-best month ever. You’re going to have a hard time convincing anybody that Bellinger, or maybe Yelich, wasn’t the April 2019 MVP.

For the sake of this post running longer than 105 words and maybe illuminating something beyond the obvious, another one of the leaderboards Yelich and Bellinger also top is the cWPA leaderboard:

I like using cWPA (defined: championship win probability added “takes individual game win probability added (WPA) and increases the scope from winning a game to winning the World Series. Where a player’s WPA is the number of percentage points that player increased or decreased their team’s probability of winning a single game, their cWPA is the number of percentage points the player increased or decreased their team’s chances of winning the World Series.”) in MVP analyses because I think it should be attractive to a broad swath of the MVP electorate in that it accounts for the traditional notion that the individual award-winner ought to have been on a winning team. When handing out performance awards for a given season (or some subset thereof), it makes sense to reward players based on what they actually accomplished, as opposed to what they should have accomplished but for bad luck, sequencing, weak teammates, strong opponents, environmental variations, and other contextual and extrinsic factors. After all, these factors work, to some extent, on all players, and just as we determine team monthly standings based on actual win percentage (and not a sabermetrically adjusted winning percentage), so too should we determine individual monthly awards based on actual results.

If you followed the cWPA leaderboard over the course of the last month, you would’ve seen Yelich hanging out at the top most days, eventually joined at the top by Bellinger thanks to the latter’s strong, late surge. You also would’ve seen Kirby Yates consistently hanging around the second or third position for much of the month. Who is Yates, and how did he come to join Bellinger and Yelich in the clear top echelon of early season cWPA accumulators?

The Padres closer certainly has gotten off to a hot start, but it’s important to remember that he’s only thrown sixteen total innings in 2019. He’s probably going to give up a home run at some point, for example, and eventually seems likely to allow more than one run per sixteen appearances.

It also bears noting that relievers commonly experience a greater share of their playing time in situations of elevated leverage, so it isn’t totally surprising to find a reliever hanging out near the top of this group (cf. 2016 Zach Britton), though it of course is a double-edged sword for WPA-based metrics.

Finally, even if Yates’ hand remains steady, his team’s situation over the course of the season may not put him in a position to boost championship win probability. The Padres currently are 17-13 and tied for second in the NL West, but they’ve allowed more runs than they’ve scored, which isn’t what you’d like to see if you’d like to see the Padres competing for a playoff berth and a World Series championship in 2019.

Cody Bellinger probably deserves player-of-the-month honors for April, but Yates has, at a minimum, made a case with his own April performance that he is a guy to watch, which is pretty good for a Padres reliever in 2019.

Before lunch yesterday, I learned two things. The second was that former St. Louis Cardinals shortstop Ozzie Smith, one of the most talented and popular players in MLB history, began his career in San Diego. Smith made his major-league debut with the Padres in 1978 and spent four seasons with them before they traded him to the Cardinals following the strike-shortened 1981 season. (In digging into this news-to-me, I also discovered that the Detroit Tigers were the first team to draft Smith, but he didn’t sign with them after they picked him in the seventh round in 1976. San Diego picked him in the fourth round the following year and he signed.)

The first thing I learned yesterday morning was that Dolly Parton is the author of the Whitney Houston hit “I Will Always Love You.” Parton’s original version is this week’s Jam:

Everybody had a good time with Will Ferrell’s Major League Baseball debut last week, and that’s no surprise. Will Ferrell is funny and good at making people laugh, and, it’s always seemed with him, the bigger the stage, the bigger the laughs. Ferrell started Thursday as an undrafted amateur free agent signee of the Oakland Athletics, and he finished the day as a San Diego Padre. In between, he appeared in games as a member of eight other teams and played every position, including designated hitter (pictured above). He even has his own Baseball-Reference page!

All of this feels like it belongs within Ferrell’s entertaining wheelhouse. Close examination of his B-R page reveals a little surprise, however:

Who knew Cincinnati held Norm’s rights to begin with? Maybe it has something to do with the Marge Schott joke he made on Weekend Update nineteen years ago, forever “preserved” on this broken NBC.com video? Baseball, like Norm, proves to be a continually unfolding mystery of the most enjoyable variety.

It’s been a while– too long– since the last dispatch from Upton Abbey, but today’s news commands an update.

The Braves’ offseason has been one filled with departures. First, they allowed a number of their free-agent pitchers– Ervin Santana, Kris Medlen, and Brandon Beachy, among others– to walk, along with role player Tommy La Stella (via trade). Then came the biggest move of all: Atlanta traded Jason Heyward, its best player and a fan favorite by virtue of his abilities and history in the Braves’ farm system, to the hated Cardinals for some mystery meat.

Now Justin Upton is departing for San Diego, the latest of the Padres’ marquee offseason acquisitions. In exchange for the younger Upton, who is heading into the last year of his contract, the Braves will receive four minor leaguers, including Max Fried, which sounds like a selection on the Popeye’s menu but actually is just a twenty-year-old pitcher who’s already had Tommy John surgery, and something called Mallex Smith. If you can stomach that sort of writing, here are scouting reports on these prospects.

Braves fans can be forgiven for feeling like they’ve been whipsawed. After competing for a playoff spot two years ago and combining the high-profile acquisition of the Upton brothers with contract extensions for most of their infield, it looked like Atlanta was really building something.

As it turns out, the Braves are building something, but it isn’t a good baseball team. The construction of the new Cobb County stadium– much reviled in these e-pages— is the lens through which these moves can be understood. It now is clear that new general manager John Hart has his marching orders: deliver a team that will be competitive in 2017, the year the new park opens. “And not a moment sooner,” fans might add.

There’s nothing wrong with rebuilding. Every team not named the Yankees and (now) the Dodgers has to do it from time to time. What’s likely to trouble baseball fans in Atlanta is the sudden downshift into rebuilding mode apparently for the sole purpose of optics: the Braves organization wants to unveil its new– and, again, controversial and probably illegal– park with a competitive, if unrecognizable, team on the field. The timing was off. The best way to arrive in 2017 with a good team is to sell off your assets that are valuable in 2014. Expect to see Craig Kimbrel traded during the 2015 season. That’s what’s happening now.

Were the Braves of 2013-14 world-beaters? Obviously not, and the 2014 season exposed flaws that everybody chose to pretend didn’t also exist in 2013. But there was a framework there. The team didn’t cry out to be blown up. My strong suspicion is that it wouldn’t have been, even with a new GM in place, absent the construction of the new park. And that’s a stupid reason to hit the restart button.

The MLB had a fairly inactive trade deadline today, but luckily ALDLAND had a very active podcasting session to make up for it. Marcus and I share our semi-informed opinions on a variety of trades that were and were not made, as well as discuss the date of the MLB trade deadline and whether it should be moved. Bonus discussion of music related things. Will this podcast be the first ALDLAND podcast to be on iTunes? Who can say?