The week of August 16 was as exciting a stretch of days as fans of the Detroit Tigers have had in a couple years. After sleepwalking through an aimless rebuilding process with lows as low as those of Houston’s famous tank job but without the Astros’ supercharged turnaround to competitive status, concern was growing that the organization might be starting to feel a little too comfortable in the increasingly populated sub-mediocre wilderness. Yet, to fans’ surprise and pleasure, General Manager Al Avila treated everyone to a one-two-three punch of debuts, allowing everyone an up-close look of the future of Detroit baseball. On Monday, Isaac Paredes, whom the Tigers received from the Chicago Cubs along with Jeimer Candelario in the trade for Alex Avila and Justin Wilson, started at third base following Candelario’s move to first after the injury to C.J. Cron. On Tuesday, left-handed pitcher Tarik Skubal, the Tigers’ ninth-round pick out of Seattle University in the 2018 draft, got the start. And on Wednesday, right-handed pitcher Casey Mize, the first overall pick in that same 2018 draft, had his turn.

The streaking White Sox, who won seven straight before finally dropping a game to the Cubs Sunday night, treated the Detroit rookies about as roughly as they did the rest of the lineup, though there were some bright spots that week, particularly from Mize:

After Wednesdays’ debut there’s little doubt that Mize, the No. 1 overall draft pick in 2018, is in the right place. Mize ultimately allowed three runs to the Chicago White Sox over 4 1/3 innings, but he struck out seven batters without walk, the first Tigers pitcher in history to do so in his debut. He was the first MLB pitcher since Stephen Strasburg in 2010 to reach that mark.

Mize generally lived in a narrow velocity band – save for a few low-80s curveballs – using pitches that moved a lot of different directions. The pitch movement chart below shows how all 73 of Mize’s pitches moved (from the catcher’s perspective). 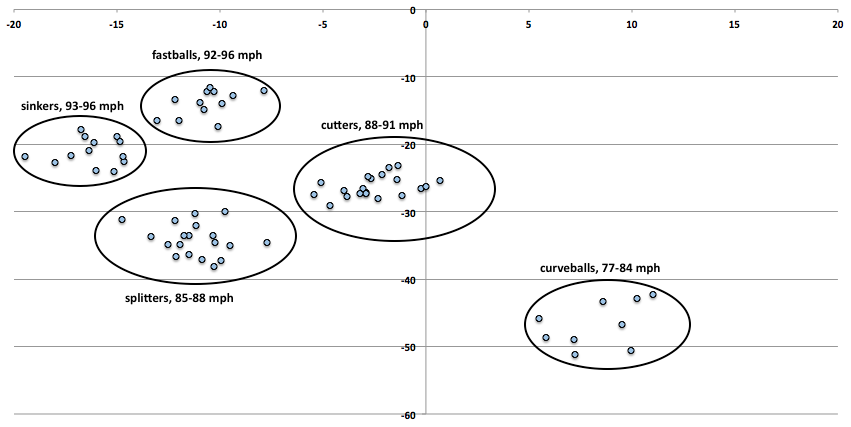 Mize’s zone chart from that night shows his effort to work on the edges of the zone:

Mize made his home debut Monday night against the Cubs, and things did not go quite as well for him as they had his first time out. Fewer innings, fewer strikeouts, more walks, more runs. Final line: 3.1 IP, 2 K, 5 H, 2 BB, 3 ER (4 R), 1 HR. What happened? He was generating the same amount of movement on his main pitches, after all. For whatever, reason, though, he did not seem to be locating them as well as he had in his first start. Compare the above zone map from the White Sox game to this one from the Cubs game: 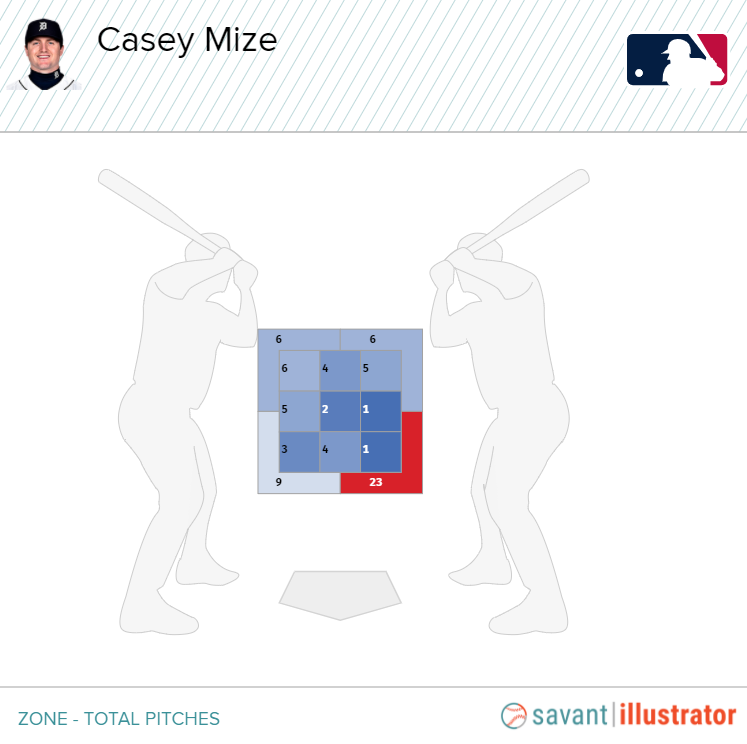 If you thought Mize was working far to the glove-side outside that night, your eyes did not deceive you. Mize’s pitches did not deceive the Cubs either. Compared to the White Sox batters in his first outing, the Cubs batters’ overall and zone swing rates dropped more than ten percent. Mize’s location wasn’t tempting them to take their bats off their shoulders.

Detroit’s top pitching prospect will have his third bite at major-league hitters this afternoon against the Minnesota Twins. Mize’s first pitch is scheduled for 1:10 pm.