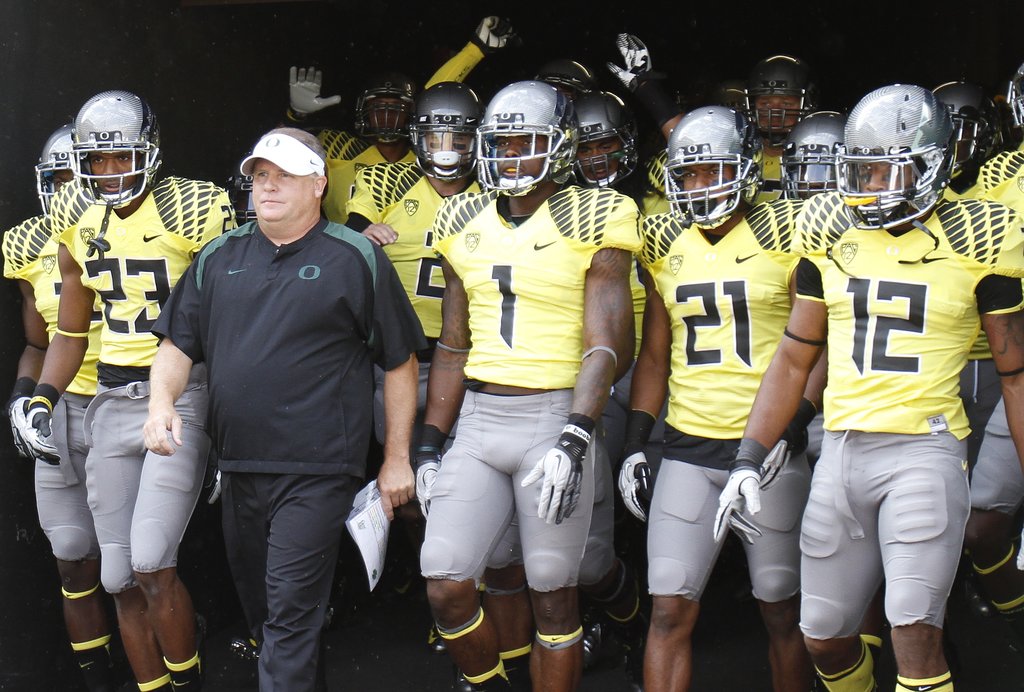 There is a myth that exists in college football that some really good teams are great offenses with bad defenses. These teams win games by scores like 62-51 or 45-38, and, so the theory goes, they are just good enough on offense to outscore any opponent.

In reality, all great teams are fairly complete, meaning that they are good in all phases of the game. You can’t really be a great team if you have a bad defense. What apparently fools everybody is the fact that football is a game with no set pacing. A baseball game is nine innings, or twenty-seven outs if you prefer. Golf is eighteen holes. A set in tennis is six games. Games like football and basketball are different. A football game can range, at the extremes, from something like seven possessions (this year, Navy v. Notre Dame) to as many as seventeen or eighteen. The typical range is more like 9-10 for a low-possession game, and perhaps fifteen for a high-possession game. But, as with basketball, certain teams tend to play high-possession games, and certain teams tend to play low-possession games. Teams that play high-possession games generally feature hurry-up offenses, or pass-happy offenses, or defenses that prefer to gamble for stops rather than playing “bend but don’t break”. Teams that play-low possession games will be teams that run the ball a lot, or play conservative defense that seeks to avoid giving up big plays at the expense of allowing lots of first downs. As should be somewhat obvious, teams that play high-possession games tend to score more points, and they allow more points, all else being equal. For some reason, we collectively seem to appreciate this in basketball, and we don’t necessarily consider low scoring teams to be “bad” on offense. We look to efficiency rankings instead.

Football analysis is catching up, but nobody seems to be taking notice. The stats I will be quoting are from Football Outsiders (very good site if you’ve never seen it).  This site ranks offenses and defenses as units, based on some advanced per-possession stats that attempt to adjust for quality of opponent. This is obviously an imperfect process, but in my opinion it provides much better information than simply saying that, because a team averages 35.6 points per game, they are “good” on offense.

Oregon has long had a reputation as a high-flying offense and a poor defense. I think it is time to challenge that assumption. Offensively, they’ve been good, no question. Since 2007, their offensive ranks have been 7th, 13th, 11th, 11th, 5th, 2nd, 6th, 1st, 13th, and 18th. This year, their 18th rank is their worst on offense in a decade. That’s pretty good. But what about defense? Since 2007, they have been 19th, 42nd, 22nd, 5th, 9th, 4th, 29th, 28th, 84th, and 126th. Raise your hand if you are surprised, particularly about the stretch for 2010 to 2012 (5th, 9th, and 4th). The 2010 national title game was billed as two great offenses against two bad defenses (Auburn and Oregon), yet somehow, those two defenses held the great offenses to some of their lowest point totals all season (22 to 19). Turns out, when analyzed properly, both were great defenses as well (that just so happened to be playing with extreme, hurry up offenses, so they played many high scoring games).

I still consider the absence of a playoff in 2012 to be a travesty. 2012 Oregon vs. 2012 Alabama would have been a great game, and we needed to see it. If only somebody could have beaten Notre Dame during the regular season…  Oh well.

In any event, Oregon’s national-title-contender status from 2010 to 2014 was based upon great offense AND great defense. Last year they still managed to be 9-4, a pretty good year, with the 84th defense. But this year, with a truly terrible defense, they are 4-8, despite still having a great offense.

And that is normal. Many teams follow that formula. For example, 2013 Indiana (8th offense, 105th defense, 5-7 record), 2012 Baylor (5th offense, 94th defense 8-5 record), 2010 Michigan (8th offense, 107th defense, 7-6), 2009 Stanford (4th offense, 104th defense, 8-5 record). Another prominent team that had this reputation was West Virginia under Rich Rodriguez. As a 2007 national title contender that lost in an upset to Pitt to drop out of the title game, then routed Oklahoma in the Fiesta Bowl, they were 3rd on offense and 9th on defense. Not quite what most people thought.

The bottom line is that you won’t be a great team without being at least good on defense. There may be an exception or two (I haven’t researched every team from all time), but the general rule is pretty clear: if you are an elite offense and a below-average defense, you will be .500 or maybe a little better. 8-5 or 9-4 is about the best you can possibly do, and most do worse. Anybody winning 11 or 12 games has a good defense. Don’t be confused if a team like that sometimes gives up a lot of points. Maybe they are playing against a great offense, and/or defending more possessions than most other teams. If they are 12-2, its virtually guaranteed they’ve got a strong defense. Don’t believe the myth.

ESPN conducted a survey of all 128 Division I college football coaches, asking them to name their favorite musical artist. The full list of responses is here. My cursory analysis is here:   END_OF_DOCUMENT_TOKEN_TO_BE_REPLACED

At 37-8, the once-middling Atlanta Hawks have the second-best record in the NBA. If they beat Brooklyn tonight, they’ll match last season’s win total with more than two months to go in the regular season. Did anyone see this coming? Yes, last year’s Hawks snuck into the playoffs and nearly knocked off the top-seeded Indiana Pacers. And observers should have noted the significant number of games the Hawks’ top players missed due to injuries last season; a healthy team couldn’t help but be better. But this much better? The most important difference seems to be a new coach, former Greg Popovich understudy Mike Budenholzer, who knows how to utilize the players he has, and a group of players that is on board with and executing their brand of team-oriented basketball.

Indeed, as numerous writers have observed,* Atlanta is scoring more by passing more. They have the fourth-best field-goal percentage, and of those field goals they make, more than sixty percent of the two-pointers and nearly ninety-three percent of the threes are assisted. Both of those rates lead the NBA. Behind them: the equally high-flying Warriors, the only team with a better record (36-7).

It probably shouldn’t be surprising that similar strategies would be similarly effective in generally similar sports (five active players per team engaged in free-flowing gameplay). With camera-driven player-tracking technology recently implemented in the NBA and on its way to the NHL, perhaps the rudimentary analogy set forth above can serve as a call for inter-sport collaboration between basketball and hockey analysts.

* Blogger code for, “I can’t find the article I previously read that made my precise point, so get ready for me to wave my hands over the raw data and hope you’ll buy the general premise.”

AD and Commodawg were at Phillips Arena– a/k/a The Highlight Factory a/k/a The Hawk’s Nest– last night with the hopes of seeing eight seed Atlanta clinch a first-round series over one seed Indiana. Instead, we saw a suddenly tentative Hawks team repeatedly surrender leads, including a four-point lead with about two minutes to go in the game, while the Pacers played as steady of a game as they have all series. I don’t know enough about the NBA to offer any real insight or analysis about what happened last night, but on the offensive side, it seemed to me that Atlanta kept finding the wrong shots for the wrong people. In particular, Jeff Teague, Kyle Korver, and Paul Milsap seemed to fail to fully embrace their roles on the team last night. Korver is a starter who also is a three-point specialist. He needs to make more than three treys, and he probably needs to attempt more than eight for the Hawks to win. Atlanta was good from the free-throw line as a team (87.5%, Teague was 9-9), but it would have been great to see Teague take over in this game, which neither team really seemed to want to win. In general, the Hawks need to improve their shot selection in game seven: 35.8% from the field isn’t going to cut it.

The atmosphere at the arena last night was a fun one. All the seats were filled, and everyone was dressed in red and engaged in the game from start to finish. For one night anyway, the Hawks had captured their home town’s attention. Here’s hoping they close out the Pacers on Saturday evening in Indiana and give those fans another reason to come out and support them in the postseason.

ALDLAND is here with a pre-tournament podcast. We might be too late to give you much advice for this year’s bracket, but there is still good information and strategies in here for next year or for when you fill out that all important NCAA hockey tournament bracket. Upsets, final four teams and whether you should wear IU pants to the bar when IU isn’t playing . . . it’s all here.

After an extended break the ALDLAND podcast is back and better than ever. College basketball is finally on the menu, as is discussion of a big trade in the MLB. And as always, listen for ALDLAND’s college football picks of the week.

Baseball is back for a second straight week as Marcus and I react to the division series in both the American and National Leagues. Elsewhere, Jadaveon Clowney fails to escape the wrath of ALDLAND as we discuss his numerous “injuries”. Finally, picks and predictions for this week in college football.

As promised, ALDLAND is back at it again with another college football preview blowout. Every BCS conference is discussed, and don’t worry, we didn’t forget about the Domers. Join Marcus and I, along with a special surprise guest as we unveil our picks and discuss the major players in the 2013 season as we see it. College football! So exciting!

The first weekend of the NCAA men’s basketball tournament is in the books, and half of the teams are back home hitting them, their basketball days finished until next season. First, a look at which teams made it to the Sweet Sixteen, then a check on the standings in ALDLAND’s bracket challenge.     END_OF_DOCUMENT_TOKEN_TO_BE_REPLACED