In a time-honored sporting tradition, what started out as a historic trend soon may become merely notable. While NFL officials, through week fourteen, have thrown their penalty flags at a rate that would constitute an all-time* high, that rate has been falling as the season has worn on.

My note from last week still applies: 2017 now looks quite close to the prior peaks in 2015 and 2014. If things continue as they have this season, 2017 still will be the high-water mark for penalty flags in the NFL, but the week-to-week trend strongly suggests that that is not a reasonable assumption. That trend also lends some support to the idea that abbreviated preseason training leads to worse play early in the regular season.

* The NFL Penalty Tracker has data going back to the 2009 season, but I’m pretty confident that we still are witnessing the all-time high-water mark.

It has been exactly ten months since an occasion has arisen to file a new entry in this series on Atlanta Braves shortstop Dansby Swanson. Thankfully, last night’s win in an unusual game on the road against the Nationals provided an opportunity to revisit the former Vanderbilt star and top overall pick in the MLB draft.

With the Braves leading the Nationals 5-2 in the bottom of the eighth inning, Swanson, positioned on the first-base side of second as part of an infield shift in place against Nationals batter Matt Wieters, snagged a late one-hopper behind him that caused him to go to the ground. Swanson nevertheless was able to flip the ball to the covering third baseman, who went on to complete the inning-ending double play. Full video is available here.

Back in September, when I last wrote about Swanson here, it would’ve been difficult to believe that it wouldn’t be until nearly the All Star break before I would write about him again. Now, the All Star game comes as something of a sore subject in this context. My sure bet for 2017 NL rookie of the year, Swanson wasn’t even among the top five ASG vote-getters at his position.

If you, brave soul, have watched any Atlanta baseball games this year, though this doesn’t come as much of a surprise. In 145 plate appearances last season, Swanson was roughly average at the plate (107 wRC+; but cf. .303 TAv ). This was the source of excitement about Swanson. Everyone knew his glove would play at short, and the evidence of an average-to-slightly-above-average bat suggested great promise for his future. It’s far too soon to abandon hope in that promise, of course; after all, Swanson’s only twenty-three years old. For the time being, though, Swanson appears to have left that bat of his back in 2016. So far this season, he’s been a decidedly below-average performer at the plate (62 wRC+, .234 TAv). By the FanGraphs’ metric, no other shortstop has been worse than Swanson on offense through the same number of plate appearances. While part of that is due to a very rough start, his performance since then hasn’t exactly been a consistent upward climb.

Since Swanson’s defense continues to be solid, the question remains whether he’ll be able to find his batting legs again in the second half of this season. The good– if tentatively so– news is that he at least appears to be trying to correct course. One of the unusual things about Swanson’s approach through the first quarter of the 2017 season was a large dropoff in his swing rates. Just as suddenly as he stopped swinging, perhaps due to a lack of confidence after poor results, though, he– sometime around the end of May and the beginning of June– began swinging again, and generally doing so more than ever.

(There is a way to present this that’s even more visually dramatic, but I’m learning that some readers may prefer the telling of a story with one graph rather than three or nine.)

There’s a lot of noise in the rest of Swanson’s offensive data, and the improved results haven’t yet surfaced, but there’s evidence that Swanson– along with new Braves hitting coach Kevin Seitzer– is tinkering. Publicly, the entire coaching staff has been nothing but supportive of Swanson throughout his struggles, speaking both to his efforts at improvement and his confidence, the latter undoubtedly aided by the team’s refusal to send Swanson down to the minors.

Swanson’s going to have to do more than just swing the bat if he wants to get back to helping his team on offense as well as defense, of course. Fortunately, there is some indirect evidence that Swanson is on the right track. As Swanson began increasing his swing rates a month ago, opposing pitchers– whose behavioral changes sometimes are the best indicators of a batter’s changing level of success– started decreasing the number of pitches they threw him in the strike zone, often an indication that they view the batter as a more dangerous hitter.

On the other hand, it could be less a sign of respect for Swanson’s bat and more a simple recognition that Swanson’s swinging more at everything these days. Without the results, it’s hard to tell. Even though it isn’t likely to conclude with a rookie of the year trophy, tThe story of the second half of Swanson’s 2017 is going to be an interesting one. 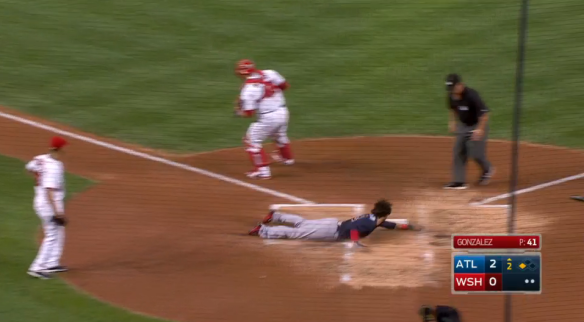 The first entry in this series featured a three-pack of defensive highlights from Atlanta Braves rookie shortstop Dansby Swanson. This series, like this website, is all about the hits, though, and now we’ve got one of those to share, in the form of Swanson’s first career MLB home run, which he hit last night in Washington.

For his first big-league four-bagger, Swanson made like fellow SEC-man James McCann and earned it the hard way. Video evidence of his inside-the-parker is here. Statcast’s breakdown video is available here. The humans who monitor that robotical statistical machine also posted this nugget:

Here’s another nugget from a non-robot-subservient human:

Swanson becomes the first #Braves player to hit an inside-the-park homer since Wes Helms on Oct 7, 2001 vs Florida. @680_The_Fan

Call it a long-distance runaround? Yes. 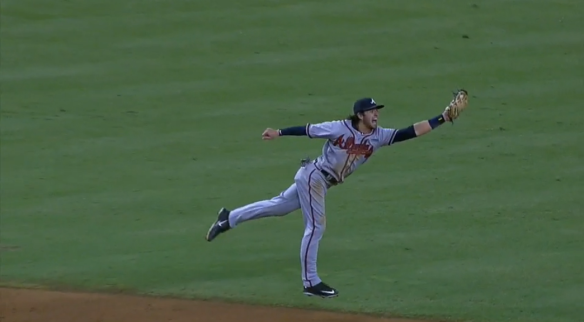 In many ways, the extravagance of this package equates the profligacy of the prog rock combo themselves. After all, how else but on a triple-LP collection could one hope to re-create (and/or contain) an adequate sampling of Yes’ live presentation?

In 2016, presumably, you now find yourself reading an early greatest-hits/sampler post regarding Atlanta Braves rookie and former Vanderbilt Commodore Dansby Swanson, which is a triple-video collection of defensive highlights, all accumulated in last night’s win over the Arizona Diamondbacks, the team that, in 2015, drafted Swanson with the top overall draft pick.

We don’t own the rights to this footage, obviously, but MLBAM was kind enough to package all three plays into one highlight video, which you can watch by clicking here. For an extra bonus, Swanson recorded his first major-league stolen base last night. Statcast’s breakdown video is available here.

Didn’t enjoy these videos? Think “Swansongs” is a dumb name that, if anything, should describe the end of a career and not the beginning? Don’t care. Sorry not sorry.

Last Sunday, Chris Squire, best known as the bass player for the band Yes, lost his battle with leukemia. Although the band underwent periods of lineup changes, you have never heard Yes without Squire, in part because of the value of his prominent playing style, and in part because of his controlling legal interest in the band’s name. As we prepare to honor the birth of a nation stateside, in memory of Squire, we take a moment to turn our ears back to England, to which we are forever tied: