The NFL’s back, and oh man is it boring. Last night’s Chiefs-Patriots game, the first of the 2017 regular season, should have been exciting. Kansas City hung close with the defending champions in Foxboro until they pulled away later in the fourth quarter. What should have been a compelling contest instead dragged. The third quarter alone took nearly an hour. Even if the NFL has eliminated the touchdown-commercial-PAT-commercial-kickoff-commercial sequence, the penalty flags literally are getting out of hand too often.

The last five minutes of the third quarter was comprised of fifteen plays from scrimmage. Officials threw flags on seven of them. 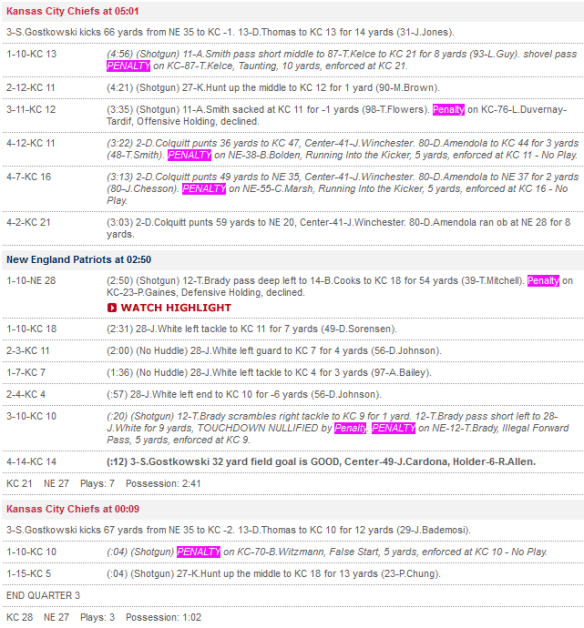 If it seems to you like penalty flags are on the rise, you aren’t wrong. From the NFL Penalty Tracker, a website I just found: 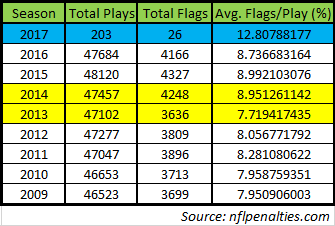 The 2017 data comes from one game, of course, but the referees were significantly more active last night as compared to an average game last season.

Another interesting point in that penalty-flag data is the jump in total flags beginning in 2014. It isn’t immediately obvious to me why that happened (here‘s a list of rule changes heading into that season), so I’ll just quote from my Super Bowl XLVII preview post:

Call it the Efficient Breach Bowl. According to the Wall Street Journal, the Seattle defense is so successful against the pass, in part, because they just don’t care about being penalized for pass interference. They know that officials won’t call PI on every single play (and the number of penalties called in the playoffs is significantly lower than during the regular season), so they take their lumps with a few flags over the course of a game, disrupting receiver routes all the while. In a follow-up article in advance of the Super Bowl, the Journal suggests that Denver may look to combat Seattle’s aggressive secondary through so-called “pick plays,” in which receivers run routes designed to shed defenders by drawing them into collisions with another player. Though subject to recent controversy following a play in the AFC Championship game that resulted in a game-ending injury for New England corner Aqib Talib, picks or “rub routes” are not necessarily against the rules. As The MMQB’s Greg Bedard explained, the key question is whether the offensive player initiated the contact or whether the contact was incidental: “within one yard of the line of scrimmage, anything goes . . . but beyond that one-yard buffer it is illegal for an offensive player to initiate contact with a defender.”

The Seahawks won that Super Bowl (if you can name the MVP of that game without looking, I’ll send you some ALDLAND merchandise), so it isn’t unreasonable to speculate that other teams would mimic their aggressive defensive approach beginning in the next season, thereby triggering more penalty flags leaguewide, but I haven’t looked at an offensive/defensive breakdown of those numbers in the table above.

For years, people have been predicting that football would end as a result of its potential for dangerous, lasting injury, including brain injury, but we need to consider the possibility that a different and more immediate market force– boredom– might trigger its decline even sooner.

5 thoughts on “Waive that flag: The NFL returns with zebras on parade”