After Louisville guard Russ Smith’s team won the NCAA men’s basketball tournament, it was a little bit surprising when Smith’s father announced right after the game that his son was entering the NBA draft. It felt for whatever reason like a kneejerk sports parent move– just let the kid enjoy the moment for a while– and besides, Smith hadn’t had a great game and is a bit on the small side to boot. He was one of the best players on the best team this year, though, so it wasn’t surprising when Smith confirmed his dad’s statement the next day.

Louisville head coach Rick Pitino confirmed it too, until he didn’t. ESPN reports:

“Russ, I think, is 50-50,” [Pitino] told Sports Radio 790 in Louisville [today]. “He’s a very confused young man in terms of his decision right now. He didn’t want his dad to say that about him coming out. He wanted time to think of it.”

Yeesh. Does Pitino, who has coached at major college programs and in the NBA, think he’s helping his player with those statements? (He’s not.) Is he trying to force Smith to return to Louisville? (Maybe.) Is he showing early signs of tattoo ink poisoning? (Possibly.)

Why can’t college basketball coaches in the state of Kentucky leave well enough alone when it comes to their players declaring for the NBA draft? 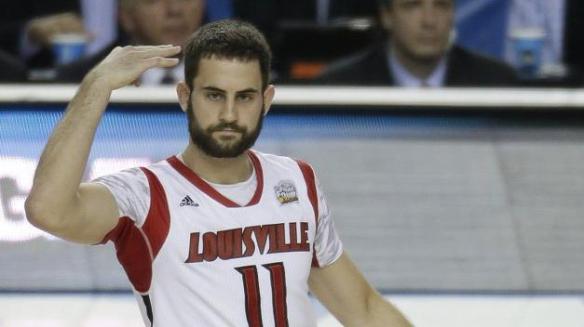 Last night, Louisville outlasted Michigan to win the national championship game. A few thoughts as we awake from our Rick-Pitino-is-getting-a-tattoo nightmares:     END_OF_DOCUMENT_TOKEN_TO_BE_REPLACED