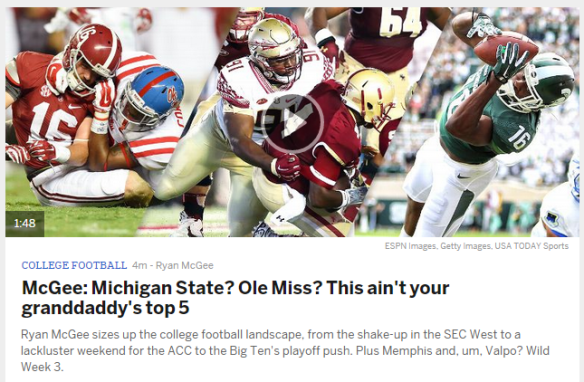 Depending on who you are, and, really, who your grandfather is or was, the top of this week’s college football AP poll could look reasonably unsurprising to him:  END_OF_DOCUMENT_TOKEN_TO_BE_REPLACED

I have to agree, because the man said what I’ve been saying for a week now: Michigan State looks like the best team in the country at this moment. Both teams in the Oregon-MSU game looked better than anything the SEC had to offer through the first two weeks of the season.

Week three saw the Spartans struggle against Air Force’s triple-option offense, but, one has reason to expect, that data point will have little meaning going forward. Meanwhile, Georgia dominated South Carolina in what easily was the Dawgs’ best game of the year, and Ole Miss made it two straight over Alabama.

The Rebels’ win certainly was exciting, and it’s led some to argue that they deserve the top AP spot. Their sixty-four points per game and undefeated record that includes a win in Tuscaloosa merit a top-tier ranking, but home wins over UT-Martin and Fresno State aren’t terribly revealing.

Terribly revealing? Missouri’s ugly win over UCONN is a strong indication that the two-time SEC East champions are unlikely to defend their consecutive division titles in Atlanta this December. Ohio State had a similarly weak victory over Northern Illinois, but those Huskies are better than the ones from New England, and the Buckeyes’ recent track record suggests they’ll be fine going forward.

Not that the Big East is relevant in any discussion of college football, but how is it that after Syracuse man-handled West Virginia, West Virginia is ranked while Syracuse is not?  (They share the same record.)  At least USC has a better record than Arizona State (although I’m sure they’ll have a loss after Oregon as well).  I imagine there would considerable uproar if Wisconsin were ranked higher than Michigan State today.

Then again, maybe I answered it in the beginning: no one cares enough about the Big East to actually bother evaluating them.

Update:  The coaches are even worse than the AP, giving WV about 10 times as much love as the Orange.

2nd Update:  None of the computers have WV ranked.