Mike Trout has been an All Star in each of his seven full MLB seasons. He led the American League in fWAR in five of those seven seasons (four of seven by bWAR; led AL hitters in WARP in three of seven). During that period, he finished in the top two in AL MVP voting every season save his injury-shortened 2017 and won the award twice.

So far, 2019 looks like another MVP year for Trout, who received his eighth-consecutive All Star nod and has a commanding (roughly two-win) advantage atop all AL WAR(P) leaderboards. That Trout will win the award feels like a foregone conclusion, and it has for some time. Early in his career, though, Trout’s MVP candidacy was a contentious flashpoint for the battle between the respective adherents of “new” performance-valuation metrics and “traditionalists.” That conflict came to a head in 2013, when Miguel Cabrera repeated as AL MVP and Trout again finished second. Cabrera’s .348/.442/.636 line led the majors and represented an across-the-board improvement over his line in 2012, when he became baseball’s first triple crown winner in over forty years. On the other hand, Trout’s WAR mark clearly bested Cabrera in 2013 (10.2 versus 8.6 fWAR; 9.0 versus 7.3 bWAR), just as it had in 2012 (10.1 versus 7.3 fWAR; 10.5 versus 7.1 bWAR).

Ironically, Baseball Prospectus, long a leading publisher of work by adherents to “new” performance-valuation metrics, recently reversed course on the 2012 and 2013 AL MVP races after it incorporated changes made to its batting metric into its WAR model (i.e., WARP), acknowledging now that Cabrera really was a more valuable player than Trout in ’12 and ’13. Of course, these days, the fight between “traditionalists” and “sabermetricians” is over. In 2019, no one is arguing that Michael Brantley or Rafel Devers, the current respective AL leaders in batting average and RBI, deserve the league’s MVP award, for example. Part of that comes from the broader appreciation of the usefulness of advanced metrics, and part of that is because Trout is leading many of the traditional categories– at the moment, homers (42), OBP (.435), and SLG (.649)– too. Even if the analytical environment around baseball hadn’t changed, old-fashioned voters would have a hard time denying Trout his due in 2019. Does that mean that Trout has every vote locked up this year?

Stated otherwise, the question is whether there’s a good reason why someone would not vote for Trout as this year’s AL MVP. WAR isn’t everything, of course, but the current difference, by fWAR, between Trout and second-place Alex Bregman is Tim Anderson, or Whit Merrifield, if you prefer, or Blake Snell, last year’s Cy Young winner, all of whom currently have 2.5 fWAR. And Trout’s leads in homers and OPS fortify his position, with his positive contributions on defense and the basepaths rounding out a seemingly unassailable case. What more could he do?

The traditional MVP consideration never was just about individual numbers like batting average and RBI; voters also seemed to care about team-level winning. After all, baseball is a team sport in which the goal is for teams to win games and championships, and there is a conceptual sensibility to the notion that a player deemed “most valuable” would be one who translated his individual value into some significant measure of team value. Recall for example that, in 2012 and 2013, Cabrera’s Tigers were division-winning playoff teams that made deep runs while Trout’s Angels missed the playoffs and waffled around a .500 win percentage. If all of Trout’s good isn’t really doing the Angels any good, is he really the type of player we think of as an MVP? We can appreciate a superstar toiling in competitive obscurity, but does it make complete sense to bestow upon him or her the game’s highest individual honor?

Consider how infrequently postseason MVP awards go to players from losing teams. When it comes to formulating an MVP-award rubric, one can both prefer reliance on metrics that better account for individual performances and believe that the rubric should account for both team-success and individual-statistical components. In other words, the sabermetric revolution need not change what we’re looking for in an MVP even if it has changed how we decide if a candidate meets our criteria.

The good news is that there is a sabermetrically sound method to building an MVP-award analysis that accounts for both individual and team aspects. It’s based on incorporating championship win probability added (cWPA). As I’ve written before:

What should make cWPA (defined: cWPA “takes individual game win probability added (WPA) and increases the scope from winning a game to winning the World Series. Where a player’s WPA is the number of percentage points that player increased or decreased their team’s probability of winning a single game, their cWPA is the number of percentage points the player increased or decreased their team’s chances of winning the World Series.”) attractive to a broad swath of the MVP electorate is that it accounts for the traditional notion that the individual award winner ought to have been on a winning team. When handing out performance awards for a given season, it makes sense to reward players based on what they actually accomplished, as opposed to what they should have accomplished but for bad luck, sequencing, weak teammates, strong opponents, environmental variations, and other contextual and extrinsic factors. After all, these factors work, to some extent, on all players, and just as we determine team season standings based on actual win percentage (and not a sabermetrically adjusted winning percentage), so too should we determine individual season awards based on actual results.

Using cWPA as part of the MVP decisionmaking process allows a voter to consider more than simply whether a player played for a winning team or a playoff team: it permits the voter to evaluate the degree to which the player moved his team toward achieving the goal of the sport.

The current American League cWPA leaderboard is below. Trout is on the list, but he’s a fair distance from the top spot, which Cleveland’s Carlos Santana occupies. 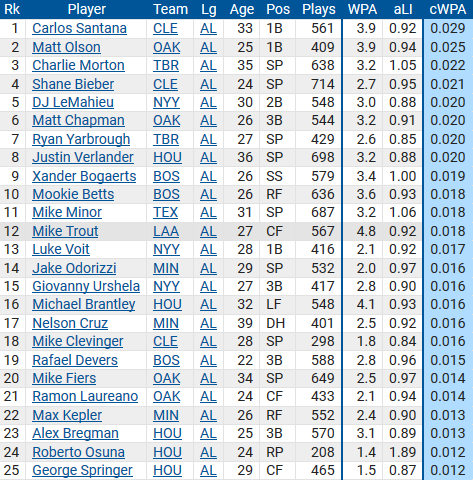 This isn’t to say that Trout’s contributions aren’t helping the Angels win games; after all, he leads the AL in standard WPA. It’s just that he isn’t helping the Angels win meaningful games. In part, that’s because the Angels aren’t playing meaningful games. Their odds of making the playoffs this season peaked at twenty-two percent, and that was all the way back on March 25. They’ve been in the single digits since mid-May and finally flatlined at zero percent two weeks ago.

Is Trout to blame for these circumstances? The instinct is to say that he is not; that he’s just one guy; and that he’s already doing so much to help his team. On the other hand, Trout, who was scheduled to hit free agency after the 2020 season, spent this spring finalizing a substantial extension of his contract with the Angels that will keep him in California at least until 2030. That really isn’t the point, though, and this line of thinking, while rational, strays from the stated goal of incorporating individual and team elements into the MVP analysis.

Metrics like cWPA that are based on win probability added are especially helpful in this situation because they blend individual and team outcomes. Ultimately, I think the best way to build a sabermetrically defensible MVP-selection model that addresses the traditional definition of the award is to start with WAR(P) and fold in a certain amount of cWPA. I’m still thinking through how to determine the appropriate relative balances of each, as well as the possibility of incorporating other factors.

In the meantime, though, especially if you’re resistant to some of the foregoing, consider the current race for the NL MVP: If, supposing the season ended today, you’d find it easy to vote for Christian Yelich over Cody Bellinger, we might be closer to being on the same page than you think.

Related
Toward an MLB MVP-Voting Rubric