The Tulsa Sound is defined in large part by the work of its two principal pillars, J.J. Cale and Leon Russell. Cale passed three years ago, and, on Sunday, Russell too returned to the eternal dust bowl:

Russell, known as “The Master of Space and Time,” was a master of the blues, country, rock, gospel — whatever styles of music were put in front of him and whatever he could pull from his creative mind. With dozens of albums, hundreds of songs recorded by musicians at the top of their game and thousands of contributions to recordings from The Beach Boys to J.J. Cale, Russell’s influence on music in the last 50 years has been profound.
…
In 1969, Russell performed in the Delaney & Bonnie and Friends band, with several members of the band coming on with Joe Cocker for the Mad Dogs and Englishmen recordings and iconic tour. That tour put a spotlight on fellow Tulsa musicians, with Jim Keltner and Blackwell on drums and Carl Radle on bass performing on the tour and on the album.

Russell launched his solo career with the release of his self-titled album in 1970, an album that included one of his best-known songs, “A Song for You.”

Russell moved back to Tulsa in the early 1970s to establish Shelter Records and build recording studios in Tulsa and near Grand Lake. A memorial to Russell grew throughout the day Sunday on the steps of his old Tulsa studio, The Church Studio on Third Street, which the city renamed Leon Russell Road in 2010.

His solo career produced multiple hit albums and songs, including “A Song for You,” “Tight Rope,” “Stranger in a Strange Land” and “Lady Blue.” His work spanned genres from the rock sounds of his self-titled 1970 album to the honky-tonk of “Hank Wilson’s Back,” incorporating blues, gospel and soul across his albums.

“He played and recorded with the heavyweights of country music — George Jones and Willie Nelson — and of course rock ‘n’ roll royalty — George Harrison and Eric Clapton,” said Jeff Moore, director of the forthcoming Oklahoma Museum of Popular Culture, to which Russell donated a large part of his work for future display.

Relix adds this note from Russell’s appearance at the 2015 Lockn’ Festival:

But when it came down to brass tacks, he was straight business—playing and singing with all his might, giving tips to the musicians, beaming with joy as Derek [Trucks] ripped a solo or Susan [Tedeschi] wailed on the mic, and even leading the troupe through some surreal improvised jams. He was fully engaged with everyone in that rehearsal room, even though it must’ve been an overwhelming experience for him (he was working with dozens of people he hadn’t seen in over 45 years). He was like the elder statesman of the experience and treated everyone with love, respect and humility, which ultimately guided that massive collective to deliver one of the finest and most memorable shows any of us had ever seen or any of the musicians had been a part of.

Enough chatter. I’ve featured the exact same take of this first jam in this space before, but its opening makes it too perfect to omit this time around:

Russell also played a featured role in Ravi Shankar and George Harrison’s Concert for Bangladesh, and this spotlight medley is a highlight of the night:

I’m not sure what’s going to happen now to the Tulsa Sound and scene without these two, and I’m hardly in a position to say, but I know that they made something special, authentic, and perfectly delivered. We don’t deserve more, and we probably don’t even deserve that.

Three weeks ago, this space brought you an Angel Band Jam in memory of Dr. Ralph Stanley. Now it’s time to share another angelic jam, featuring some folks I’m very excited to catch in person this weekend, as well as a very special guest:

In about ninety minutes, the NCAA men’s basketball tournament tips off in Auburn Hills, where Valparaiso meets Michigan State in a 14-3 matchup at 12:15 Eastern. That means you still have time to do the following while you aren’t working today:

UPDATE: Last-minute insider tip from a family with a strong athletic background:

The Tigers are in the World Series! As I wrote to reader and White Sox fan chikat this week, the AL Central ended the way we all thought it would, with Detroit in first place, and Chicago and the rest of the ragtag divisional band lining up behind them. The journey from game one to game 162, though, as documented here from the Tigers’ perspective, did much to raise doubts about what was once thought to be a foregone conclusion. When Detroit, after losing Victor Martinez– an offensive leader on the field and an emotional leader in the clubhouse– to a season-ending injury in the offseason, signed Prince Fielder, they had upped the ante in a big way. For reasons I explained at the time of the Fielder signing, the window on a Tiger World Series victory had been accelerated and focused on the immediate next few seasons, beginning with the present one. For a variety of reasons, enunciable and otherwise, I had pegged next year in my mind as the year this Detroit team would play for a world championship. But here they are, facing off against the San Francisco Giants, who are just a year removed from defending their own World Series title.

I don’t think the Tigers are a year early. I do think they have more confidence in themselves than I do, as evidenced by that prediction and by some of the things I’ve written about them this season. I also think that baseball, for all of its extended, plodding slowness, is a sport of fleeting opportunity at least as much as the other, faster-paced games we play on a major level. (Brendan and I criticized the Washington Nationals for ignoring this fundamental premise when they shut down their ace this season.) There’s no reason to shy away from this moment or otherwise treat it as a test run or bonus opportunity, and this Tiger team has a variety of means by which they can and should seize this opportunity to bring Detroit its first World Series championship since 1984 and its second since 1968.

END_OF_DOCUMENT_TOKEN_TO_BE_REPLACED 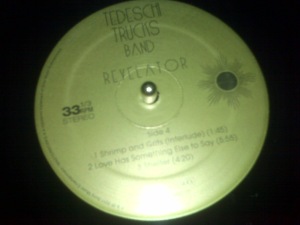 I have been meaning to review Revelator since before it came out earlier this summer, and I was excited when my vinyl/CD package finally arrived a couple weeks ago. Revelator is the Tedeschi Trucks Band’s first album, though it’s hardly the first release for any of the eleven members of the band.

To understand this band and this recording, you have to know that the named members of the band, Susan Tedeschi and Derek Trucks, were independently successful musicians before they got married in 2001, a matrimonial match made in music heaven. Tedeschi sang the blues with soul and fire as a solo act. Trucks, the nephew of Allman Brothers Band drummer Butch Trucks, has been wowing audiences with his guitar since he was a child, later joining his uncle’s band and leading his own outfit, the Derek Trucks Band. The two did collaborate over the last ten years. The DTB didn’t add a permanent lead singer until Mike Mattison joined for 2006’s Songlines, and Tedeschi sang a track on 2002’s Joyful Noise and 2009’s excellent (and Grammy-winning) Already Free. The two also joined their guitars with Eric Clapton’s as a part of Slowhand’s Crossroads tours. Although they followed the wedding ceremony, these and other collaborations were like musical flirtations or dates between the two, who largely appeared to live separate, if overlapping, professional lives.

Revelator, though, represents the marriage. END_OF_DOCUMENT_TOKEN_TO_BE_REPLACED