Rather than my own attempt at fashioning a nugget of faux-wisdom, the purpose of this Baseball Notes post is to highlight a number of articles posted elsewhere addressing current offseason issues in the sport.

On the hot stove‘s slow burn:

An underappreciated element of the utter sameness that permeates baseball today is the number of executives who came through the commissioner’s office at Major League Baseball either as an intern or early in their careers. Jobs there aren’t just pipelines to teams. They are breeding grounds for the proliferation of commissioner Rob Manfred’s doctrine, honed during two decades as the sport’s chief labor negotiator.

How does it work? Consider the case of Tommy Hunter, the relief pitcher, who late last winter was holding out for a major league contract. On the same day, according to two sources, at least two teams called Hunter offering the exact same deal – an occurrence that in the past might have screamed of collusion. In this case, the sources said, it was likelier a reflection of how teams value players so similarly.

It’s not just the algorithms with minuscule differences that spit out the same numbers. It’s a recognition of how to manipulate the new collective-bargaining agreement. “Clubs are maneuvering to take advantage of the significant salary depressors in the CBA,” one agent said. An example: One large-revenue team telling agents that his team is wary of getting anywhere close to the luxury-tax threshold, lest it be penalized for exceeding it.

On Julio Teheran and what happens when player-value metrics tell different stories:

At Baseball-Reference, Julio Teheran was much worse in 2017. He allowed heaps more runs than he had in 2016. It’s more complicated than that — a ton of work has gone into the calibration — but at a basic level this is what we’re talking about. By bWAR, based on runs allowed adjusted for things like ballpark and the quality of his defense, Teheran was worth 1.6 wins in 2017, close to league average.
. . .
At FanGraphs, Julio Teheran was much worse in 2017, worse even than he was at Baseball-Reference. His strikeout rate went down, his walk rate went up, and he allowed way more home runs. It’s more complicated than that, but at a basic level it’s not much more complicated than that. By fWAR, which is based on a stat (FIP) calculated with those three factors alone, Teheran was worth 1.1 wins. He pitched considerably worse than a league-average starter.
. . .
But now it gets complicated, because at Baseball Prospectus Teheran’s WARP was 3.8, identical to his 3.8 WARP in 2016. He ranked 24th in baseball, ahead of Alex Wood, James Paxton and Robbie Ray. We’ve found a story that says Teheran was actually good.
. . .
Which takes us to a third level of storytelling, observing not just what happened or what should have happened but what should have should have happened.

On the weekend’s big throwback trade between the Dodgers and Braves:

With five players involved, [Matt Kemp, Adrian Gonzalez, Scott Kazmir, Brandon McCarthy, and Charlie Culberson,] this is a big trade for two teams to make. But then, if we’re going to be realistic, this isn’t about the players at all. This is a swap of money, or, more accurately, this is a swap of debt. There is short-term debt, and there is shorter-term debt.
. . .
Gonzalez is already a free agent. The Braves designated him for assignment so fast that it was part of the initial press release. Kemp is unlikely to play a game for the Dodgers, since they’re already looking to flip him, if not drop him outright. Kazmir didn’t pitch in the majors this past season. McCarthy did, but he threw just 92.2 innings. Culberson batted all of 15 times before making the playoff roster because Corey Seager was hurt. All of these players combined for a 2017 WAR of +0.7. It was all thanks to McCarthy, and his 16 adequate starts.
. . .
[H]ere’s how this works. Gonzalez’s 2018 salary belongs to the Braves now. Then his contract is up. The same is true for McCarthy, and the same is true for Kazmir. Culberson does come with some years of team control. The Dodgers are also sending the Braves $4.5 million. And Kemp’s 2018 salary now belongs to the Dodgers. So does Kemp’s 2019 salary. In each year, he’s due $21.5 million.
. . .
[T]his exchange is more or less cash-neutral. That is, neither the Braves nor the Dodgers are taking on the greater obligation. But the Dodgers are spreading it over the next two years, reducing their 2018 payroll figure. The Braves will face the greater short-term burden, and then, come 2019, there will be sweet, sweet freedom. The Braves ditch a future obligation, giving them more financial flexibility a year from now. The Dodgers assume a future obligation, but they, too, will get more financial flexibility a year from now, and beyond, because they likely won’t have to pay the most severe competitive-balance taxes. All they’re worried about is getting the overage penalties to reset. . . . Next offseason, Bryce Harper, for example, is expected to be a free agent. Manny Machado is expected to be a free agent. All sorts of good players are expected to be free agents, and, significantly, Clayton Kershaw could opt out. The Dodgers are presumably planning to spend big, so resetting the overage penalties now could and should eventually save them eight figures. All it requires is one year of dipping down.

Spring training is under way, which makes this the perfect time to find out what’s going on with the Atlanta Braves as they prepare for their first season in Cobb County. My latest contribution to Banished to the Pen is a preview of the 2017 Atlanta Braves. Even more than usual, I do recommend taking in this and other Braves content, including however you prefer to track game action, from the relative comfort of your home, office, or mobile unit, because actually getting to these games is going to be a bear, and El Oso Blanco lives in Houston now. 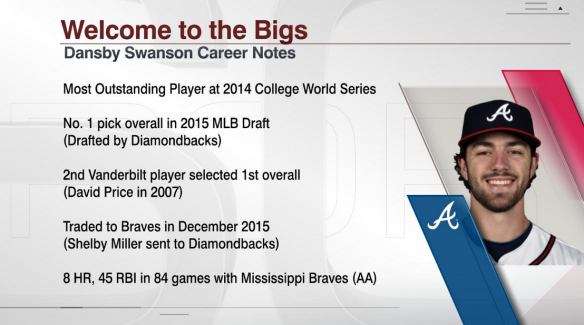 On June 8, 2015, the Arizona Diamondbacks used the first overall draft pick to select Vanderbilt University shortstop and 2014 College World Series Most Outstanding Player Dansby Swanson. One of three Commodores selected in the first round of the 2015 MLB draft, Swanson spent little time in the Arizona organization before the Diamondbacks sent him, along with Ender Inciarte and Aaron Blair, to Atlanta in exchange for Shelby Miller in the consensus worst (for Arizona) trade of the offseason and one of the most lopsided in recent memory.

For his part, Swanson was happy with the trade. A Marietta native, he considered his move a homecoming. After appearing in 105 minor-league games this year, the Braves called him up to the big club, and he made his MLB debut last night in a home game against the Twins.

Dansby Swanson, on putting on the #Braves uniform for the first time tonight. @680_The_Fan pic.twitter.com/wfmDC5hGKQ

Just three years older than Turner Field, Swanson’s first MLB appearance came in the soon-to-be-demolished park where he watched baseball games as a child. When he came to the plate in the second inning for his first big-league plate appearance, wearing a batting helmet reminiscent of Jason Heyward’s (Swanson was hit in the face with a pitch in his first onfield practice with the Diamondbacks), the rookie received a warm ovation from the home crowd. END_OF_DOCUMENT_TOKEN_TO_BE_REPLACED

Brace yourselves, listeners.  ALDLAND’s latest podcast features a very special guest.  I don’t want to spoil anything, so fire up the podcast and find out for yourself who it is.