Rock and Roll never forgets, and neither does ALDLAND. Last season, I took a look at whether the Tigers struggled to score later in games, a trend that, if shown and in combination with the team’s bullpen woes, would make comeback wins less likely. While the preliminary numbers suggested I was onto something, the trend appeared even more pronounced with one-hundred games’ worth of data. The purpose of this post is to make good on the promise implicit in that last one by completing the full season’s worth of data.

First, an aside on data collection. I previously gathered and organized these inning-by-inning run totals by hand because I didn’t realize Baseball Reference actually tracks that information. In order to maintain the same error potential, and because B-R doesn’t separate the runs/inning between wins and losses, I’ve updated (a simplified version of) my chart as I did before.

(Hover over image for detailed description.)

One hundred games turned out to be a pretty good sample size for measuring this statistic last year. The team’s lack of late scoring persisted through the end of the 2013 season. Although the disparity became more pronounced over the final sixty-two games, it actually held steady in the losses subset, suggesting that the Tigers mounted better (if still unsuccessful) comeback efforts in August and September.

Detroit clearly scored less later in games, but they weren’t alone in that habit last year. What’s possibly noteworthy is the degree to which the Tigers didn’t score late as compared with other successful teams. Their late-game R/IN deficiency was clearly worse than those of the other 2013 American League playoff teams: 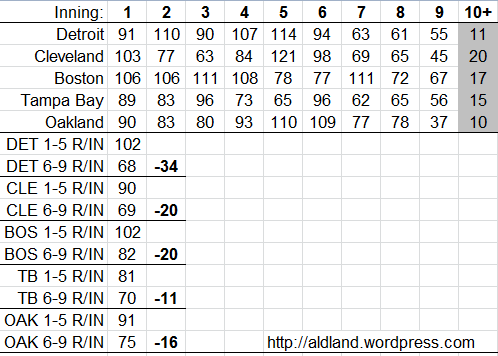 As I wrote before, the above data confirm my feeling that the Tigers were having trouble scoring late in games and therefore mounting comebacks. It also supports my derivative assertion, which is that Detroit’s problem was not just its bullpen, but the combination of a group of relief pitchers who couldn’t hold leads and a group of batters who couldn’t retake lost leads (or add insurance runs to help preserve leads).

What does the above tell us about this year’s Tigers? Not too much, I don’t think. First, their R/IN looks a little more evenly distributed than it was in 2013. Second, there was a sequencing aspect that added meaning to the 2013 numbers. Former manager Jim Leyland hardly varied his batting order all year long, which means that Detroit fans can look at these charts and have a decent idea of which players were doing their hitting when during a game. The 2013 team’s batting order was one of its main identity-ordering principles, and I certainly had it in mind as I was going through all of this. With new manager Brad Ausmus seemingly running out as many different lineups in the first three weeks of 2014 as Leyland did in all of 2013, it’s tougher for me to derive as much meaning out Detroit’s 2014 R/IN data.

For me, it was easy to identify this weakness in the 2013 squad. The 2014 group is a different team, and it certainly has problems. After a hot start earned Victor Martinez the accolades he’s long deserved, Detroit has gone colder than Robocop in January. Much of the pitching staff has struggled, and as this depth chart shows, they aren’t alone:

All this chart really does is apply candy colors to what Detroit fans already know: a) Miguel Cabrera, Martinez, and Ian Kinsler are doing pretty well; b) the outfield is unsteady, and WARP cares a lot more about Torii Hunter’s haphazard defense than it does his veteran leadership; and c) the whole left side of the infield is a rotting log. That shortstop was a known problem following the loss of Jose Iglesias does not make it less of a problem. Backup number one Andrew Romine seems like a nice guy, looks to be better than average on defense, and can’t hit worth a lick. Backup number two Danny Worth has value, if any at all, as a relief pitcher. Over at third, Nick Castellanos never is going to be a great defender, but with his offensive numbers regressing, alarmists (read: every Tigers fan, secretly) are starting to wonder how long Ausmus can use the rookie as an everyday starter.

When Dave Dombrowski is the boss, and when the boss has Mike Ilitch’s ear and checkbook, there always seems to be help on the way, and again there is, this time in the form of reclamation relief pitching project Joel Hanrahan and shortstop prospect Eugenio Suarez. (Outfielder Andy Dirks is due to return soon from back surgery as well.)

Will this be enough to right Detroit’s land cruiser? The projectors continue to like this team in the long term. In the midst of a losing run like this one, though, it feels hard to put much weight on any of these numbers.