When strangers would ask me about the book I was reading, Mike Rowe’s Chicago Blues: The City & The Music, I described it as “an urban sexual thriller.” The truth is that no stranger ever asked me about the book I was reading, though, and Chicago Blues is about the farthest thing from a literary thriller of any variety since the Gutenberg Bible was set to print. With a plot arc that parallels the Encyclopedia Britannica, this book plods from the Mississippi cotton fields to Chicago via the Great Migration with an arm’s-length familiarity that conveyed less a lack of information and more a certain physical and conceptual distance from the subject. Amibiguous punctuation on the back cover introduction of the author as “Mike Rowe, a noted British blues historian,” but it confirms enough of the reader’s sense of an approach that is in at least some respect foreign. 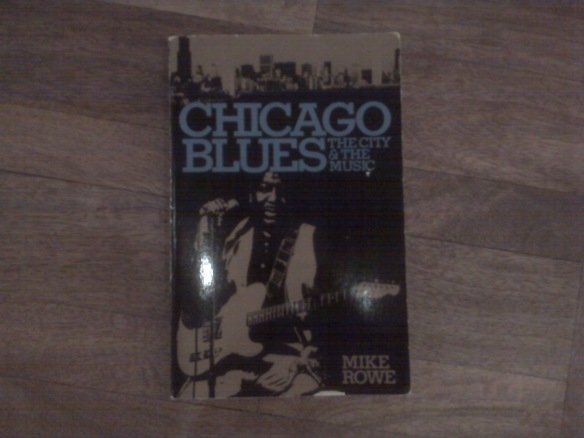 Still, there is something to learn from the drumbeat of names and factoids that populate the meat of this book. In particular, I found the personalization of the movement from Mississippi to Chicago by way of West Memphis, AR, to be informative, as was learning about early blues leaders besides Robert Johnson, including Tampa Red and Big Bill Broonzy.

After that, though, Rowe’s methodological approach became all too clear. His portal into the Chicago blues scene was the record labels, probably because they offered the most ready source of documentary evidence of that scene. What they don’t offer much insight into, at least after a while, is the music (to say nothing of the city) itself. Recording histories and trends tell us something, but far from everything, about the music and the musicians. With barely any exception, Chicago Blues offers little insight into the personalities of the musicians, their interactions with their peers and competitors, their individual influences, mentors and habits, or their playing styles. Rowe almost never takes the reader inside a live performance, and when he does, it isn’t for very long. 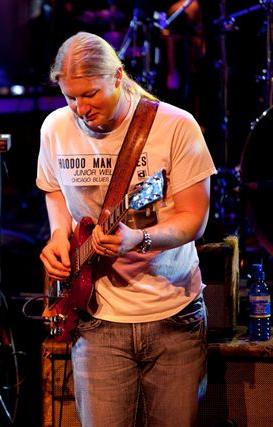 The ultimate musical achievement: To be featured on a t-shirt worn by Derek Trucks.

As usual with these sorts of things, I have an eye out for mention of some particular item. Sometimes I’m pleasantly surprised, as I was when Keith Richards surpassed even my hopeful expectations by dedicating much type in his autobiography to his relationship with Gram Parsons. Here, though, the situation was much to the contrary, as the main piece of Chicago blues recording I knew and owned heading into reading the book, Junior Wells’ Hoodoo Man Blues, received no mention whatsoever. While the Parsons-Richards connection probably is objectively a bit obscure today and as an element of the Rolling Stones’ 50-year history, Hoodoo Man Blues “is essential listening for lovers of electric Chicago blues,” “one of the truly classic blues albums of the 1960s.” While I learned from Rowe’s history that the 1965 release would have come toward the end of the Chicago blues boom, rather than toward the beginning (as I had thoughtlessly assumed), I was kept waiting for some mention of the recording considered “one of the first to fully document, in the superior acoustics of a recording studio, the smoky ambience [sic] of a night at a West Side[, Chicago] nightspot” that was never to come. Rowe addresses some of the back and forth between Wells and harp rival Little Walter, and Buddy Guy’s (originally credited as “Friendly Chap” due to label conflicts) name appears in the book, but for a text so focused on recording and the record labels, the book’s omission of this recording is more than disappointing.

I wouldn’t not recommend Chicago Blues, but I might not recommend reading it straight through. As a touchstone text, though, it makes a good reference piece to add to your collection.