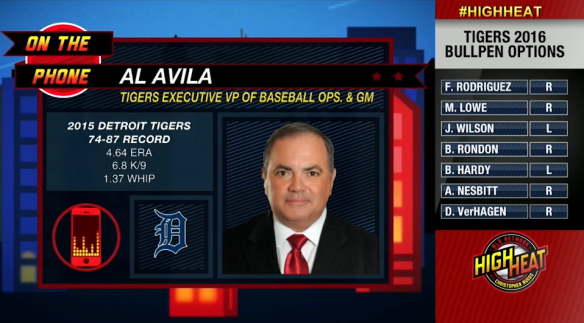 As it has done in the past, MLB Network’s “30 Clubs in 30 Days” feature spends a day with each major-league team during spring training. They spent St. Patrick’s Day with the Detroit Tigers in Lakeland, Florida. Here are the highlights:   END_OF_DOCUMENT_TOKEN_TO_BE_REPLACED

The Detroit Tigers hung on to beat the New York Yankees in a decisive fifth game last night, advancing to the ALCS, which starts Saturday night in Arlington, TX.

I questioned Jim Leyland’s personnel decisions before and during the game, but they turned out to be exactly the right moves. END_OF_DOCUMENT_TOKEN_TO_BE_REPLACED

When a reader told me he’d seen Tigers’ manager Jim Leyland wearing a suit on TBS last night, I knew something was awry. Earlier in the day, ESPN Insider, Vanderbilt graduate, and Vermonster Buster Olney reported that Justin Verlander would not start Game 5 against the Yankees in New York, and that Don Kelly would start at third, with Magglio Ordonez in right field.

I’ve only ever seen Leyland in a baseball uniform, includng hat, or some other Belichickian attire like a windbreaker pullover or hooded sweatshirt, so to see him dressed as pictured above somewhat shocks my brain.

Less shocking, but still surprising, were Leyland’s starting lineup choices. That Verlander would not start was expected. In the playoffs, you have to be able to count on your number two starter in a must-win game, and Doug Fister is more than competent to handle that task. I’m still scratching my head over the Kelly/Ordonez decision, though, and I’m trying to figure out which came first. Both mostly play right field. Ordonez has been an offensive power in the past, but he generally has cooled off in the last year or two. Kelly usually is described as a defensive replacement, meaning that he does not hit especially well, although he has been making good contact in this series.

Leyland had been working a similar pairing at third base with the recently acquired Wilson Betemit and longtime Tiger Brandon Inge. Like the Kelly/Ordonez pairing, one (Betemit) is the better hitter and the other (Inge) the defensive replacement. Also like Kelly/Ordonez, Betemit’s bat has cooled off in this series, while Inge’s has heated up.

In a vacuum, Leyland’s decision to start Kelly and Ordonez is not necessarily strange, but when examined together with the consequence of that decision– both Betemit and Inge on the bench– I have a hard time understanding it. Which is why I, unlike Leyland, wear a suit most of the time and don’t manage a baseball team. Still, I hope the Tigers aren’t getting away from what got them to this point.