Al Avila was busy yesterday. First, he traded Justin Upton to the Angels. Then, reportedly with seconds to go before the midnight waiver/postseason trade deadline, he traded Justin Verlander to the Astros. Through yesterday, Upton and Verlander were the 2017 team’s most valuable players according to bWAR. The Verlander Era– the 2006-2016 run of competitiveness– officially is over, and there can be no doubt that the Detroit Tigers are in full teardown mode. With that in mind, here‘s an updated look at the team’s 2018 financial situation:

With Verlander and Upton out, the top of that ledger is significantly lighter, and that trend is likely to continue into the offseason, when the team will trade Ian Kinsler and decline to exercise their option on Anibal Sanchez. They’ll still owe Verlander $8 million next year under the terms of the trade with Houston, and there will be raises due to a number of their arbitration-eligible players (Nicholas Castellanos likely being first among that cohort, followed by Jose Iglesias, Shane Greene, and perhaps Alex Wilson), but Detroit’s front office should be feeling much lighter on its feet. As I’ve mentioned again recently, there also should be a revenue bump from a new TV deal next year.

As Motown turns its increasingly lonely baseball eyes toward the future, where it will be incumbent upon Avila and his team to convert these more liquid resources into a new competitive core, let’s take another moment to look back at the really great era of Tigers baseball that began with Verlander’s first full MLB season in 2006. Here‘s the forty-man roster from that team, which represented the American League in the World Series that year (ages and positions shown for 2006 season): 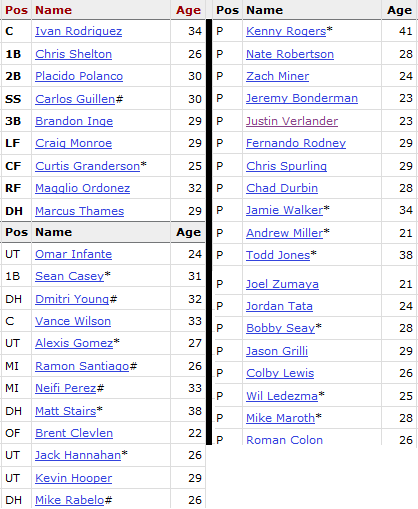 Of this group, one is in the hall of fame (Ivan Rodriguez), and at least two are working in baseball broadcasting (Craig Monroe, FSD; Sean Casey, MLB Network). Only Verlander, Curtis Granderson (Dodgers), Fernando Rodney (Diamondbacks), Andrew Miller (Indians), and Jason Grilli (Blue Jays) still play in the majors, and Verlander was, by far, the last of the 2006 crew to leave Detroit.

You can read plenty about the prospect returns the Tigers received from yesterday’s trades elsewhere on the web.  Here‘s an initial snapshot to get you started.

Last baseball season, I kept a Detroit Tigers diary here called “The DET Offensive,” a nod to all of the offensive firepower Detroit added in the offseason, primarily in the form of Prince Fielder. This season, the return of Victor Martinez and the acquisition of Torii Hunter make the Tigers even more of a threat with the bat. Their biggest question headed into the year is at the closer position. Jose Valverde had a perfect season two years ago, but he dropped off significantly last year, and GM Dave Dombrowski sent him packing as a result. Phil Coke filled in at that position quite admirably during the playoffs, but for whatever reason, he isn’t being considered for it as we head into the 2013 season. Instead, management seems to be waffling between minor league sensation Bruce Rondon (intriguing) and Rick Porcello (GAHHHHH!).      END_OF_DOCUMENT_TOKEN_TO_BE_REPLACED