The material facts in this matter are undisputed, and those facts are these:

END_OF_DOCUMENT_TOKEN_TO_BE_REPLACED

Head coach Jim Caldwell has the Detroit Lions back in the playoffs for the second time in his three-year tenure. After ending the season with three consecutive losses, the Lions (9-7) will play the Seahawks tonight in Seattle in the first NFC wild card game, which kicks off at 8:15 Eastern on NBC.

Detroit’s playoff history in the Super Bowl era isn’t pretty. In the fifty seasons since the 1966 merger, the Lions have appeared in the postseason in just twelve of those seasons, winning just one game.

That one win, a 38-6 dismantling of the Dallas Cowboys on January 5, 1992, also was the last NFL playoff game hosted in Detroit, and one of only two ever in the Super Bowl era (not counting games, like Super Bowl XL, in which the Lions, obviously, did not participate).

The national press picked up on an interesting narrative following that win, which featured Barry Sanders, of course, and also Erik Kramer, whom they highlighted as “a strikebreaker,” or, in the words of Cowboys defenders Jack Del Rio (now the head coach of the Oakland Raiders, who have an AFC wildcard meeting with the Houston Texans this afternoon) and Tony Casillas, “a scab.” Kramer had played for Atlanta as a replacement player during the 1987 NFL strike, something that upset apparent union tough guys Del Rio and Casillas and, the New York Times postulated, Kramer’s ostensible supporters in the center of the UAW universe (“this grizzled, battered town, this blue-collar, lunch-bucket town”). The on-field performances by Kramer, who had claimed the starting job after starting the season as the team’s third quarterback, and Sanders that day erased any internal concerns that might have troubled the Honolulu blue and silver faithful, however. They also silenced Del Rio:

Del Rio kept up the verbal barrage during the game, or part of it, anyway.

“I didn’t hear him make any more remarks after the first quarter, said Kramer.”

Detroit only led 7-3 at the end of that first quarter, but Dallas already had amassed half of the points it would score all day. Kramer threw three touchdown passes, Sanders finished the day with a forty-seven-yard TD run, and the Lions defense even got in on the scoring action, when Mel Jenkins intercepted starting Dallas QB Steve Beuerlein and ran it back for six. By at least this one measure– Super-Bowl era playoff wins– then, Kramer might be considered the Lions best-ever playcaller. 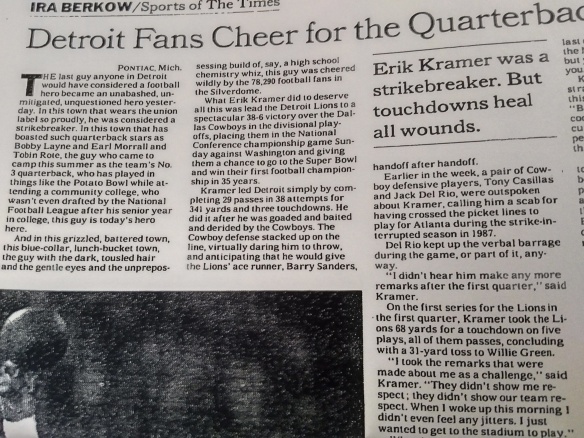 This time around, the Lions quarterback again is the lead story. Matthew Stafford has struggled somewhat since injuring the middle finger on his throwing hand (pictured above, both pre- and post-injury). He claims he doesn’t rely much on that finger for gripping the ball, but the injury can’t help. Nor do recent injuries to other key contributors like DeAndre Levy, Marvin Jones, Ezekiel Ansah, Travis Swanson, and Riley Reiff, all of whom are likely to be game-time decisions. It also is not clear whether the team has a running back, although the emergence of Zach Zenner has caught the eye of at least one Seahawk defensive lineman.

While Detroit’s nine wins came on the back of a weak schedule, the Seahawks (10-5-1) also had some bad losses this year, dropping games to the Rams and Saints and going 0-1-1 against the disappointing Cardinals. They are coming off a win in Week 17, but they barely scraped by two-win San Francisco. This has not quite been the dominant Seahawks squad of recent seasons. Still, they best the Lions in all of the usual statistical categories and are 7-1 at home, where the game will be played tonight. (The Lions were 3-5 on the road this season.)

Any pieces of good news at this point are going to be small, but a notable one is the absence of Earl Thomas, one of Seattle’s best defenders, who will not play due to a leg injury. Seattle’s aggressive defensive tendencies also may help twist this piece of seemingly bad news into good news:

You cannot be serious. pic.twitter.com/AFii3aDcfg

Lions fans are upset because Brad Allen, who calls a lot of penalties and officiated two Detroit losses and no wins, will be refereeing this game. Caldwell isn’t worried about the NFL assigning Allen to this game, though, and neither am I, because I think, in general, playoff games are officiated differently; Allen will have a completely different crew under his supervision; and, despite Seattle’s 2-1 record in Allen games, Seattle’s defensive strategy shouldn’t mesh well with a referee who throws a lot of flags. Their “efficient-breach” approach allows them to be aggressive, because they know that, even if their defenders commit pass interference or defensive holding on most every play, the officials won’t flag it every time. It therefore might not be a bad thing if Allen and his crew called more penalties in this game, so long as they do so fairly.

Another matchup to watch will be the Detroit defensive line against the Seattle offensive line, the latter being the only real Seahawk weakness. In a disappointing year from Ansah, the Lions haven’t made waves in the pass-rush department, but a breakout day from the fourth-year defensive end could be a difference-maker today.

It’s going to be a long and loud afternoon in Seattle, where a wintry mix has been in and out of the forecast. It will be tough sledding for these battered Lions. Here’s hoping they find a new gear and, once again, give their fans a reason to celebrate in January.

The Dallas Cowboys have developed a new secret this offseason, but the Wall Street Journal got the scoop. What is it? Geometry, of course. Step one “set off a panic in the room” when it was announced. What was it? Become “intensely familiar with the Pythagorean theorem.” Professor Jason Garrett, a Princeton man and the head coach of the Dallas squad, delivers regular lectures on the Greek geometric theorem that go something like this: “‘You know what the hypotenuse is? You’ll say, ‘Yeah, it’s the long side of the triangle,’ and he’ll say, ‘Well, you’re taking the hypotenuse to get to this point instead of taking the two shorter distances, so don’t run [long] around there.'” Garrett also warns against “concepts that are collinear,” because they are potentially “devastating.” Garrett is qualified to opine on such topics because of his Ivy League education: while at Princeton, he set (and still holds) the league record for football pass completion percentage, and sport is why the Ivy League is prestigious. Garrett’s peers unsurprisingly yield to his intellectual authority: “I’ve worked with Jason. He’s very smart and I wouldn’t pass one of his geometry tests,” Detroit Lions offensive coordinator Scott Linehan said. Prof. Garrett even gives homework assignments, which some of his players think is total bullshit because they didn’t come to the NFL to play school. Cowboy receiver Dwayne Harris: “I’m terrible at math. The only know math I know is dollar signs.” (Look for Harris to run a lot of serpentine patterns when he reads a double safety blitz this year.) A return to simple geometry may be appropriate for this team, however. Here’s some basic math: since 1997, the Cowboys have won one playoff game. A compass may be just the thing they need to find postseason success. 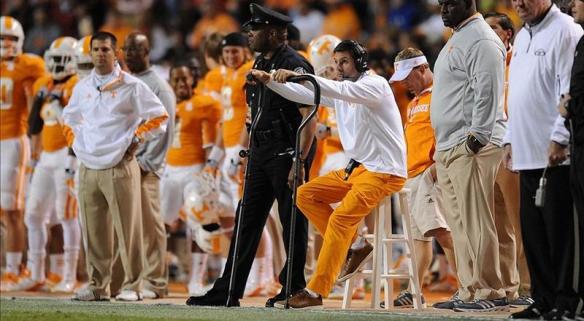 The internet is full of get-rich schemes. They require completion of complicated steps, and along the way, you’re sure to wittingly or unwittingly (but never Jason Wittenly– more on him later) divulge most to all of your private identificatory material and click on a few virus downloads in a process that never quite leads to that free ipad, college tuition, or $10,000 prize. Perhaps ironically in this Internet Age, the pound-for-pound best way to get rich fast without having to try too hard is completely offline. In fact, the less you know about technology, the better, I’d say. The trick is to be a mediocre college football coach for just a few years, then get fired. Here’s how a man named Derek did that very thing.  END_OF_DOCUMENT_TOKEN_TO_BE_REPLACED

Based on recent history, having cheerleaders on the sidelines may be the ultimate championship killer. There are six teams in the NFL that don’t have cheerleaders: the Bears, Browns, Giants, Lions, Packers and Steelers. Those franchises have won four of the last six Super Bowls and have made up half of the Super Bowl participants during that span.

Last year, Green Bay beat Pittsburgh in the first-ever Super Bowl that did not include cheerleaders from either squad. The Steelers won Super Bowls XLIII (2009) and XL (2006), while the Giants stunned the undefeated New England Patriots in Super Bowl XLII (2008). The Bears played in Super Bowl XLI (2007), but not having cheerleaders wasn’t enough to overcome the Indianapolis Colts.

This season is no exception. The Packers and Steelers are once again among the best teams in their respective conferences, while the Lions have clinched a wild-card spot and the Giants remain in playoff contention. (The Browns are in last place, but some teams are simply beyond help.)

Of course, at least one of the six teams that doesn’t have cheerleaders may be wishing it still did. The Bears disbanded their cheerleading squad, the Honey Bears, right after the 1985 season—the last time they won the Super Bowl.