This week marks the halfway point in the 2016 MLB season, which seems like a good time to check in on the preseason predictions I made.

The Red Sox are playing pretty well, and some of their young prospects are rising to stardom, but they trail the “surprise” Orioles by 4.5 games, and are only a game up on third-place Toronto. Still, I don’t think it would surprise anyone if Boston made moves and won this division in the second half, especially with new GM/master dealmaker Dave Dombrowski at the helm.

Minnesota aside, the Central is a tight race, but it looked a lot tighter last week, prior to Cleveland’s current rampage. Until then, no team had held a sustainable stay atop the division, though, of the four contenders, Detroit’s time in first was briefest and most tenuous. This obviously was a pick on the emotional side of the ledger for me (though it’s one I share with Dave Cameron), but if the Tigers can’t beat Cleveland– currently 0-9 on the year– this season, it’s difficult to see them claiming the crown in the second half.

The Astros may be a playoff team this year, and they’ve been playing better lately than they did at the start of the season, but I don’t think they’ll catch their in-state rivals, the Rangers, who lead the division by ten games and currently have the best record in baseball (better even than the Cubs and Giants), even with an everyday first baseman who has not been good.

See above references to both teams, particularly Texas. The Blue Jays are not producing runs at the same wild rate they did last season, they no longer have David Price, and Troy Tulowitzki’s looking somewhere between done and finished. I still think they’re an ok pick as a playoff team and, at the moment, are just a half game out of the second wild card spot (which currently is occupied by the Royals, of all teams). Plenty of jostling for these positions remains.

Trout’s a safe pick, and he’s a safe pick because he’s consistently extremely good. Trout currently leads the AL in fWAR (4.6), trailed by Josh Donaldson, Jose Altuve, and Manny Machado (all 4.0). David Ortiz (3.0) is only a little further down the list, and is worth mentioning because, at age forty and in what he’s announced as his final season, he’s having the best offensive year of his career. A popular uprising from Boston could inflate his MVP vote total, but, like Victor Martinez in 2014, he’s unlikely to claim the award as a DH.

Even as he’s intentionally taken some speed off his pitches in an apparent effort to maintain arm health, Sale’s been as effective as ever in 2016. He’s second in the AL in (DRA-driven) PWARP (3.88), behind only Jose Fernandez (3.99). Besides the fact that he’s good, the main reason I picked Sale to win this award is because it seems like it’s his turn. It can be very difficult to declare just one of a league’s top-tier pitchers to be the best in a given season, especially in the current era of dominating pitching, and the other consensus top guys in the AL already have won the award. Statistically, Corey Kluber could challenge Sale this year, and a successful Cleveland run in the same division as Sale’s White Sox could make Kluber an appealing candidate, but I still think this award is Sale’s to lose.

Rookie of the Year: A.J. Reed

This was an unpopular pick, and the sluggishness of the Houston front office may doom his candidacy. I chose Reed because I thought the Astros would contend again this year; despite their status as contenders, they had a hole at a power-hitting position; and they had, in Reed, a majors-ready prospect who played the position they needed filled. Unfortunately for Reed’s 2016 ROY campaign, however, the Astros didn’t decide to plug Reed in at first base until last Saturday, meaning that he’ll have some catching up to do if he wants to make a better case for himself than favorites like Byron Buxton, who already has appeared in forty games in 2016.

Whereas the American League is, as it has been recently, a model of parity, the National League is the opposite, which makes it fairly easy to predict. The Nationals hold a comfortable 3.5 game lead over Miami(!), and I can’t see the Marlins or the Mets, whose young aces have faltered a bit this year and who trail by 4 games, catching Washington in the second half.

Chicago’s recent string of losses probably means that they won’t win 117 games this year, but that’s far more than they’ll need to stay ahead of middling St. Louis (ten games back) and the Pittsburgh Broken Andrew McCutchen Thumbs (thirteen games back). Again, division winners in the NL are easy to spot.

It’s the National League. It’s an even year. Picking a team other than the Giants basically would be baseball-writing malpractice. Madison Bumgarner has a legitimate case for inclusion in the home run derby, and Johnny Cueto is back to being good Johnny Cueto after last season’s late blip in K.C. San Francisco is up seven on the thin, Greinke-less Dodgers. They’re going to win the division.

Here’s a picture of the current NL Wild Card picture: 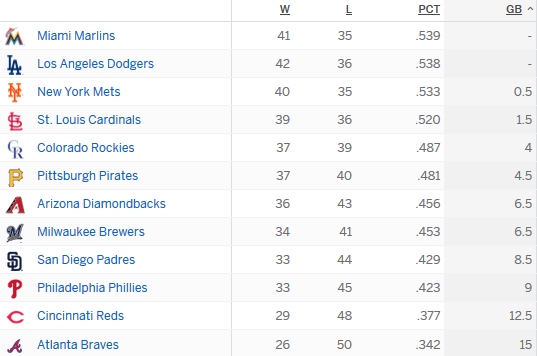 Miami won’t last, right?? At this point, the Dodgers and Cardinals are looking like better WC picks than the Pirates and Mets, and Pittsburgh’s sub-.500 record is a concern. Still, it’s not unreasonable to think that the Mets and Pirates could get it together, particularly if the latter figures out a way to get its all-star centerfielder healthy.

Here’s the top of the NL fWAR leaderboard: 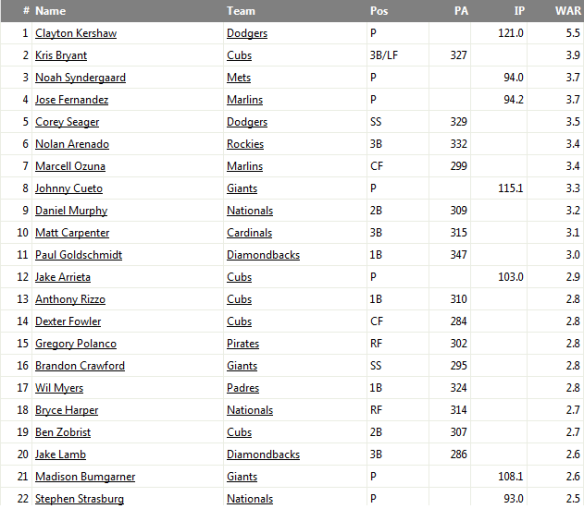 Nobody on the Diamondbacks is having the year he’d hoped he’d have it seems, and Goldschmidt is no exception. As with my Chris Sale pick, above, there was a little bit of an “it’s his turn” mentality behind this selection, but 2016 isn’t looking like Goldschmidt’s turn after all. After keeping up with, and even outpacing Trout early in the year, Bryce Harper’s fallen off a bit too. Corey Seager’s making a case for ROY/MVP, but, among the NL’s many good pitchers, it could be difficult to deny Kershaw the MVP this year.

Yes, Kershaw is the more obvious pick here– he leads all of baseball in fWAR and all pitchers in (DRA-driven) PWARP (4.98) by a full win– and probably will win the NL Cy Young this year, but Scherzer has continued to grab headlines in a way that may attract Cy Young voters. After two near-miss perfect games last season, he has a twenty-strikeout game this year. 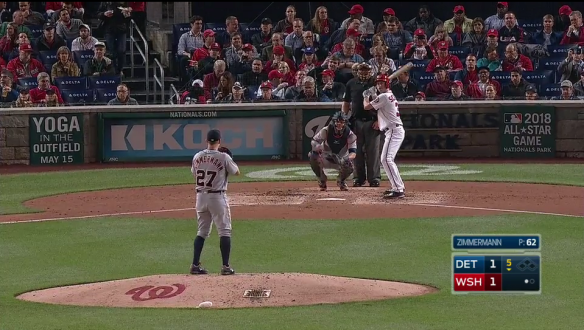 If his Nationals make the playoffs and the Dodgers don’t, voters could favor Scherzer, but, at this point, that seems very unlikely.

Rookie of the Year: Corey Seager

The younger Seager has this one in the bag. Trevor Story’s been a nice one, but neither he nor any other rookie are close to Seager this year.

At the midway point, I’d rate these fourteen full-season predictions as follows:

Previously
Can Predict Baseball? Guesses for the 2016 MLB season