The MLB season currently is on a break for All Star festivities, which makes this as good a time as many to check in on the status of my preseason predictions.

The Red Sox have, by AL East standards, a reasonably comfortable 3.5-game lead in the division. I expect the Yankees and Rays, in a tie for second, to push Boston down the stretch, but I still think the Red Sox will hang on.

Cleveland finally has taken what most assumed was its rightful place atop this division, which Minnesota led for way too long. At this point, the pack has separated into two groups: the pretenders and the can’t-even-pretenders. With four of the five teams solidly in the red in run differential (and a lot of other statistical categories), Cleveland should run away with this race.

There are a lot of nice things to write about the Astros, who are destroying nearly everything in their path and look every bit as good as someone thought they would when he or she placed them on that cover of that magazine that one time. 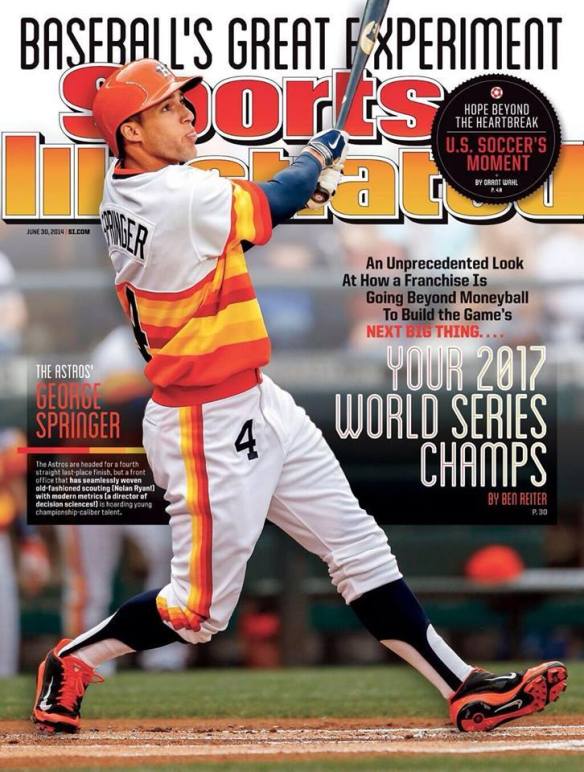 This race is so tightly packed in the American League that the sub-.500 Rangers (43-45) are only three games out. Of the five teams ahead of them, I think the Angels, Royals, and Twins will fade, but one or both of the Yankees and Rays could block their path. I still think the pick is viable, but the Rangers definitely have underperformed my expectations.

As for the Tigers– oof. My optimistic preseason prediction of an eighty-two-win season is way out the window. So too, it seems, is any reasonable hope that this might be a .500 club, which is what they looked like for a stretch there this spring before slipping even further. Unlike previous seasons in the 2006-16 run, there isn’t any indication of bad luck dragging down the team’s record (39-48), which, unfortunately, looks like a reasonably accurate reflection of their true talent right now. There remains a lot to like about this team, but at least some of those things will be wearing different uniforms by season’s end, and, even though they’ll face a slightly easier schedule in the second half, the Tigers already have done enough to have played themselves out of the postseason conversation.

As I wrote at the midway point last season, Trout’s a safe pick, and he’s a safe pick because he’s consistently extremely good. There’s an unfortunate wrinkle this time around, however: Trout’s been hurt. The reigning AL MVP has, for the first time in his career, missed significant playing time due to injury. Thanks to damage to his thumb, Trout hasn’t appeared in a game since late May. Before then, this prediction easily looked like it would be correct and, even with more than a month off, he’s still among the top ten in the AL by fWAR. A report out today says he’ll be back in action on Friday, which is good news, but, even if he returns to form, it may not be enough for Trout to defend his MVP title. (Another small factor hurting his case: at least in the short run, his team hasn’t been much different without him.)

I should’ve stuck with last year’s pick. Chris Sale has had no trouble adjusting to life in Boston and has been the best pitcher in the American League to this point. Chris Archer is in the hunt, though, which is good enough for me right now, since Archer was a bit of a buy-low pick after a tough season last year. Even though Archer probably has been the second or third-best AL pitcher so far, Sale’s built a lead that may be too big to overcome without a run of bad outings for the new member of the Red Sox.

Rookie of the Year: Andrew Benintendi

After a very unpopular pick in this spot last year, I decided to play it safe with Benintendi, who has been fine in the Boston outfield this season. When it comes to the rookie-of-the-year award, “fine” may be enough. For example, he’s been almost as good as Mitch Haniger, another preseason favorite, in 150 more plate appearances. Of course, “fine” isn’t going to cut it in a year that’s featured the arrival of Aaron Judge, who should easily bag the RoY award and, at least right now, is in first position for the AL MVP. With a 194 OPS+, Judge leads the league in OBP, slugging, and home runs (30!). Benintendi looks like he’ll be a solid, everyday player and maybe more, but Judge is the type of breakout player who wins these awards.

I’m not sure why I bailed on the Nationals here, but boy was I wrong about the Mets, who sit in fourth place, twelve games behind Washington and going nowhere fast. Numerous injuries have plagued their season, a fate I did not see befalling a team seemingly loaded with top young pitching talent. On the other hand, maybe this all is part of the Mets’ plan. With the second-largest lead among current first-place teams, the Nationals are going to win this division.

The NL Central continues to be an internally competitive race, but it’s one that no longer demands the national spotlight. The Brewers have a 5.5 game lead over the Cubs, a team that won 103 games last year and probably underachieved, which now has a sub-.500 record. I still have a hard time seeing the Cubs losing this race, but they are in a very difficult position right now.

The Dodgers are in very good shape and only seem to be getting better. At last, former Atlanta Brave and Georgia Bulldog Alex Wood is living up to and exceeding expectations. I wouldn’t be very surprised to see the Dodgers meet the Astros in the World Series. The Diamondbacks and Rockies both have been pleasant surprises in the early going this year, but the big blue machine seems built to outlast both of them.

It’s not going to happen that way. Washington, as mentioned above, is going to win the NL East, and the Mets aren’t making the playoffs. St. Louis is tied with the Cubs at 7.5 games out of the second NL Wild Card spot, and those two are the closest competition to the aforementioned Diamondbacks and Rockies. While I think it would be exciting to have three NL West teams in the playoffs, the safer bet now is that one of those two will fade and the Cubs will get it together.

Nope. Posey’s Giants are in the dumper (sub-.400 winning percentage), and Posey isn’t having a great year. There’s no obvious traditional case for him to win the award, and the advanced statistics won’t bail him out either. This has been a tough season for some of the game’s best pitch framers. Jonathan Lucroy has drawn most of the attention in that regard. Going from best to absolute worst will do that. Posey hasn’t been immune, though, and he’s seen his once-elite framing numbers take a similar tumble in 2017. Last year, no catcher added more total value with his framing than Posey. This year, though, he’s middle of the pack with a slightly below-average overall defensive profile.

(Braves catcher Tyler Flowers deserves brief mention here. At age thirty-one, he’s having the best year of his career on both offense and defense, hitting over .300 and leading the field on catcher defense. Given his track record and the track records of most catchers over the age of thirty, it’s unlikely to last, but his emergence is as sudden as Posey’s regression, and it’s a lot more fun to watch.)

There isn’t an obvious pick for this award right now, though it could come down to an interesting race between teammates in Washington (Max Scherzer, Bryce Harper, and Anthony Rendon). LA’s Justin Turner also is in the mix. If I could guess again at this point, I probably would revert to my pick for last season, Paul Goldschmidt. I might’ve been a year early on him.

Like most other people from year to year, I keep flip-flopping this spot between Clayton Kershaw and Scherzer. The latter looks like he’ll be good for it this time around.

Rookie of the Year: Dansby Swanson

I addressed this last week, but this one isn’t happening either. Instead, we have to look to the NL’s version of Aaron Judge, Cody Bellinger (.961 OPS, 25 home runs) as the leader at the break.

At the midway point, I’d rate these fourteen full-season predictions as follows:

Previously
Can Predict Baseball? Guesses for the 2017 MLB season