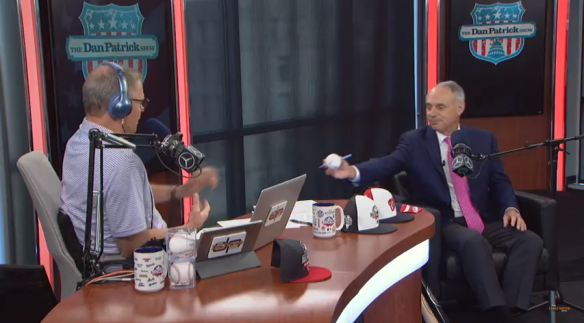 For people who write about baseball, the All-Star break offers at least two things: (1) an intraseasonal oasis in which one can examine and address baseball topics over the span of a day or two without worrying that the otherwise constant barrage of new baseball events occurring that might, for example, mess up the performance numbers on which a writer had founded his or her baseball writing and (2) a probably countervailing force in the form of significant public interviews with the sport’s leaders addressing the sport’s Big Topics Of The Day.

Regarding the latter, Commissioner Rob Manfred kicked things off this morning with an appearance on Dan Patrick’s radio show. Here are my notes of the highlights: 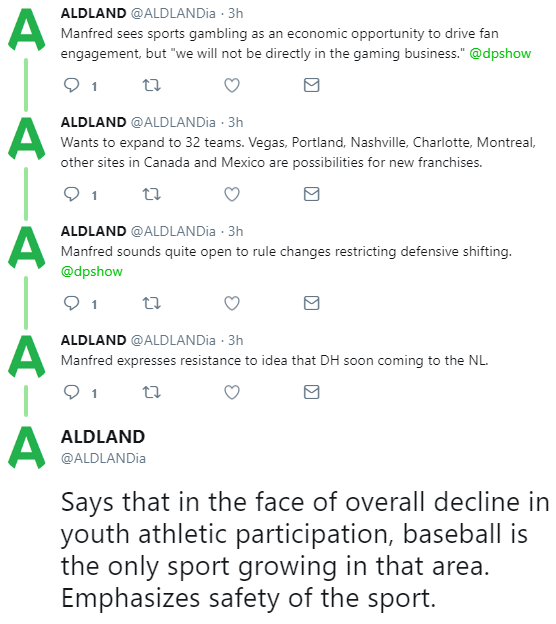 People love to talk about the designated hitter and whether the National League will adopt it, and Manfred’s mention of the subject this morning predictably reignited the “conversation”:

The Players Association has always been partial philosophically to the idea of a DH, because it means more jobs for veteran hitters. The key question is whether the union and MLB are at the table engaged on this and many other issues—and they don’t seem to be.

I suspect that those on the fence or without a considered opinion on the subject may have found prodding from recent articles like this one Ben Lindbergh published last month illustrating the historically poor offensive numbers from current pitchers. What many of these conversants don’t do is think about this conversation from the DH side, however. There really is no doubt that a designated hitter is going to bat better than a pitcher, but the nature of the DH position is changing, both in terms of the players who are filling that role and their performance levels.

Regarding the union’s particular partiality to the DH, are David Ortiz-types really the players finding extra PAs as designated hitters? Take a look. END_OF_DOCUMENT_TOKEN_TO_BE_REPLACED

This week marks the halfway point in the 2016 MLB season, which seems like a good time to check in on the preseason predictions I made.

The Red Sox are playing pretty well, and some of their young prospects are rising to stardom, but they trail the “surprise” Orioles by 4.5 games, and are only a game up on third-place Toronto. Still, I don’t think it would surprise anyone if Boston made moves and won this division in the second half, especially with new GM/master dealmaker Dave Dombrowski at the helm.

Minnesota aside, the Central is a tight race, but it looked a lot tighter last week, prior to Cleveland’s current rampage. Until then, no team had held a sustainable stay atop the division, though, of the four contenders, Detroit’s time in first was briefest and most tenuous. This obviously was a pick on the emotional side of the ledger for me (though it’s one I share with Dave Cameron), but if the Tigers can’t beat Cleveland– currently 0-9 on the year– this season, it’s difficult to see them claiming the crown in the second half.   END_OF_DOCUMENT_TOKEN_TO_BE_REPLACED 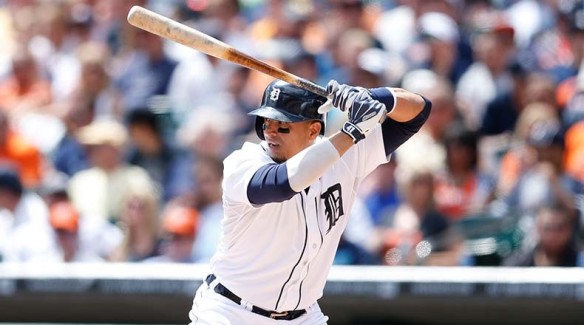 The defensive shift– repositioning infielders from their conventional locations in response to a particular batter’s hitting tendencies– may be the most significant development in baseball defense since pitchers started actually trying to miss bats with their pitches. The basic idea is that defenses can take advantage of certain hitters who are known to possess extreme tendencies in terms of batted ball direction by loading up their infield defense in line with that batter’s tendencies.

David Ortiz is a decent example of a batter with a definite tendency to hit the ball in a particular direction. Here is a spray chart showing where he hit every ball during the 2012-2014 seasons: 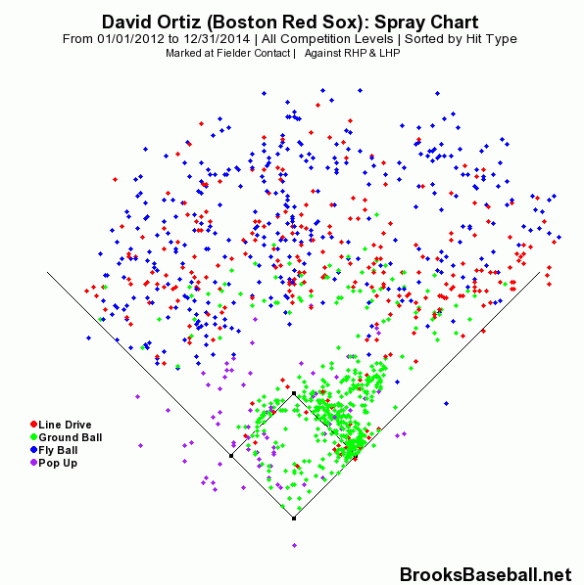 Ortiz is a top-tier power hitter, so it isn’t surprising that he’s peppered the entire field. Focusing on his ground balls, though, reveals a pretty strong tendency to hit grounders to the right side of the infield. Opposing teams noticed and began to counter Ortiz defensively by shifting against him.

Probably the most common way to arrange a defensive shift is to move the second baseman into shallow right field, move the shortstop to the first-base side of second base, and shade the third baseman heavily toward second base. Teams also employ less and more extreme variations of this basic shift. Because a fielder needs to remain close to first base, teams almost exclusively shift to overload the right side of the infield. This, in turn, means that teams almost always shift, if at all, against left-handed hitters, who, as a population, generally hit the ball to the right. Ortiz is a lefty, and his spray chart evidences the expected pattern.

No player faced a full defensive shift more than Ortiz in 2015, when opposing defenses shifted on more than sixty-three-percent of his plate appearances. The most effective antidote for the shift is a bunt to the exposed third-base side, but Ortiz, now at forty years old and at least 6’3″ and 230 pounds, has not been the bunting sort of late or, really, ever. He’s a big, left-handed power hitter in the last year of his career, and, as concerns the defensive shift, he’s just going to have to take his lumps.

A little further down that list of 2015’s most-shifted appears Victor Martinez in the #22 spot. Martinez spent much of 2015 injured, so he only made 485 plate appearances, seeing a full shift on roughly forty-three percent of them. Like Ortiz, Martinez is heavier, slow, and hits from the left side, and his 2012-2014 spray chart shows similar batted-ball tendencies to Ortiz’s: 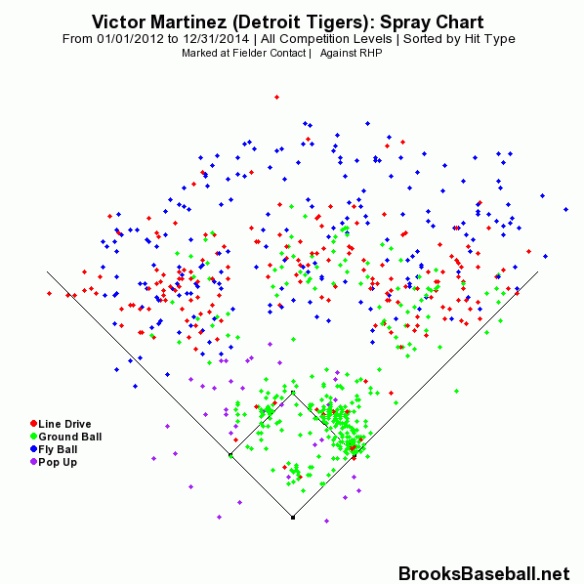 One way in which Martinez is unlike Ortiz, though, is that, while both bat left-handed, Martinez also bats right-handed. END_OF_DOCUMENT_TOKEN_TO_BE_REPLACED

I was hoping that this article would still be topical by the time I started writing it yesterday night, and lo and behold the only free agent of consequence to sign on November 3rd was Juan Rivera.  I have literally no idea who he is.  I watch at least a hundred Mariners games each year (MLB.tv FTW), plus a good number of Phillies games and even as much of a Tigers game as I can stomach now and then.  Between that and fantasy baseball, I feel like I have a pretty good handle on who’s who in the MLB and I had literally no idea who this guy was.*  So basically he wasn’t going to be on this list anyway.

Here is a list of ten of the top free agents and where I think they will sign:

Albert Pujols
2011 team: Cardinals
2012 team: Cardinals
Why: Everyone has been jawing all season long about Pujols testing the market, but I think a lot of that was ESPN puffing the subject up so they had something else to talk about during Sports Center besides whether Tom Brady having longer hair than Aaron Rodgers makes him a better QB.  When all is said and done, I think this is going to turn out like the Matt Holliday-STL deal where there weren’t a ton of other serious suitors for the money and the player didn’t want to leave St. Louis anyway.  Add in that two of the big free agent spenders, the Yankees and Red Sox already have top tier 1Bs and you don’t have anyone to seriously compete with the Cardinals at the price Pujols wants.  So in the end St. Louis will end up overpaying a bit, talking heads who said that Pujols would sign for 300 million will complain about how St. Louis overpaid, St. Louis fans will complain about how they overpaid, but inside everyone will be happy.
Outside shot: Real Madrid?  At that price, I don’t know.
END_OF_DOCUMENT_TOKEN_TO_BE_REPLACED