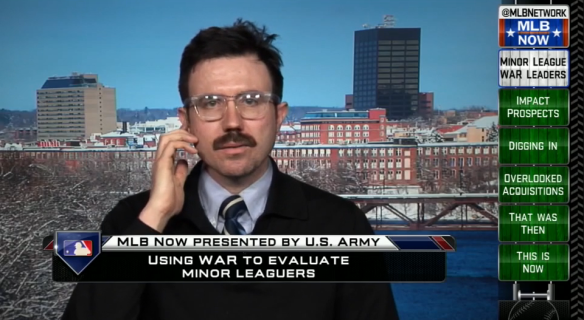 The rapid seep of the internet across the biophysical landscape has allowed, in pooling pools of athletico-scriptology, the fomenting and indeed rise of a baseball-centric analytical community that fashions itself both advanced and numerological in both its substantive and aesthetic drapings, trappings, and driftings. The aforementioned pooling-facilitated rise occurred not within a vacuum chamber or bag or filter or hose but in the context and– the soon-to-be-mentioned contextualizers would announce– against the preexisting backdrop of an often-organized and, in the metaphorical and sometimes literal literal sense, gated or bound collection of Baseball Writers who, it must be noted, likely never anticipated being intransitively thrust in any respect, and much less being so thrust into a, and really, the, (readily accepted, it also must be noted) position of defending, together with the practically necessarily wholly inclusive and thus merged task of defining, both Traditional Baseball and the traditional mode of observing, considering, and understanding baseball. They awoke to find themselves Anti-Federalists, to put a probably only partially enjoyed-by-them historical frame around it. One cohort generally granted minimal time and nominal credit to the other, and vice versa, is the point.

And yet. If there is a commonality in individual operational course of dealing it is entrepreneurially this: the need to distinguish oneself. The terminology in the following sentence is positive rather than normative. From the linguistic vantage of the traditional-minded, those of the upstart class distinguished their output, and themselves thereby, progressively; inversely, retrograde. At the extremes, both vectors have their mortal/temporal/terrestrial limits, however: points at which, for example, the only way to be more progressive is to turn, perhaps suddenly, perhaps violently, retrograde– to adopt the most traditional of traditions as the vessel in which to carry forth your message still. And vice versa. (Perhaps.)

And so. We have arrived at the above-depicted depiction of the broadcasted baseball blogger. While this is not about him but about what he has done, it is maybe worth noting, or commenting or remarking upon, that he exists, or existed, among those on the unbound progressive fringe. The worth of such notation would ripen, if at all, in the lack of surprise that should accompany one who, having understood the foregoing, observes the indicia of another who has reached the terminus of his respective– if not universally respected, see supra— vector and made the only available subsequent move, here to an admittedly extreme degree.

There exist those individuals who postulate that, as the virtual world waxes, the corporeal world necessarily must wane and further wonder whether, as a consequence, the ostensibly beneficial activity features of the virtual world become diluted so as to require a severe return to the very most traditional (meaning “old”) corporeal traditions in order to affect anything meaningful, in actual terms. Here, the rarely depicted baseball blogger, in a joint venture with the United States Army,[1] brings forth a proposed plan of training and development in which those professional, as in full-time, baseball players not yet in the Major Leagues subject themselves to the complete, as in unbridled, brutality of military engagement in order to be evaluated and thereby prove their worth as those now capable of conducting Our Nation’s Pastime at its highest (unembargoed) level. War is good for this, he is saying.