Yesterday afternoon, the St. Louis Cardinals forced a decisive fifth NLDS game against the Braves, which will occur tomorrow evening back in Atlanta. Each of the Cardinals’ two wins came by a single run, while the Braves have claimed their wins in low-scoring 3-1 and 3-0 affairs. All of the games have been full of the sort of tension-built excitement that makes October baseball so much fun.

Atlanta was and remains the favored team and has home-field “advantage” for game five, but it’s clear that they’re going to need more from the full depth of their lineup if they’re going to top this plucky Cardinals team. If the Braves’ roster has looked (and sounded– local radio coverage > TBS national telecast coverage) consistently inconsistent this series, your sensory receptors aren’t deceiving you. Take a look at the current status of the 2019 postseason cWPA leaderboard: 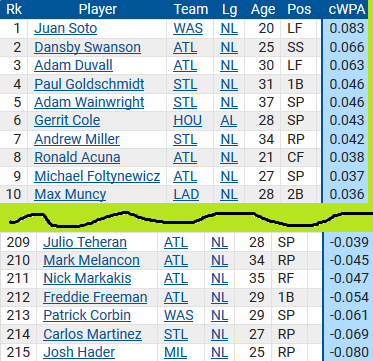 Atlanta fans probably have been saying to each other, “Wow, Dansby Swanson and Adam Duvall and Ronald Acuña and Mike Foltynewicz have been huge for the Braves this series, and, moreover, Freddie Freeman and Nick Markakis have been completely useless, and Mark Melancon and Julio Teheran have been killing us!” As cWPA confirms, the analysis by those Atlanta fans has been spot on!

As good as the good guys have been, it’s difficult to imagine the Braves advancing without getting something– anything, at this point– from Freeman, whose .535 OPS in this series indicates he’s been worse at the plate than any qualified hitter in the 2019 regular season. (Even 2018 Chris Davis had an OPS of .539! Since 1988, only two qualified hitters ever have posted a regular-season OPS below .535: Matt Walbeck (.530 in 1994) and MLB Network’s own Billy Ripken (.518 in 1988).) Sure, it’s only been four games, but Freeman’s been practically invisible– just two hits, one walk, and one run scored across eighteen plate appearances in which he struck out five times in a key spot in Atlanta’s lineup– at times when the Braves really need him to shine. This isn’t necessarily news, as he entered the postseason on a cold streak, but he’s going to have to snap out of it quickly. 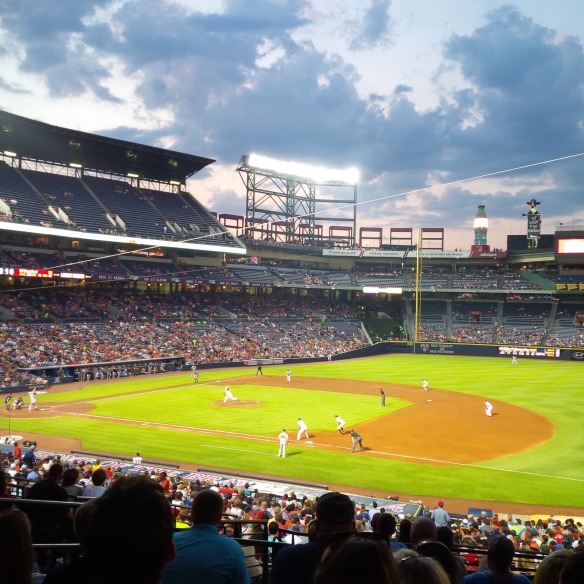 On a muggy night in Atlanta, the Braves opened a three-game series with the visiting Giants at 7:10 pm– actually a bit before then, by our watches– Monday. Atlanta’s starter, Mike Foltynewicz must’ve missed the memo, though, because he spent about an hour of game time serving batting practice to the San Francisco hitters, who responded by bombing fly balls to the deep reaches of Turner Field, netting them three homers to left, one to center, and a 6-0 lead by the fourth inning.

The rain that fell amidst the sunshine– likely the prompt answer to a desperate prayer from Foltynewicz, who, unbelievably, was sent back out to pitch the fifth and sixth innings– seemed to cool the Giants’ bats and, eventually, nurture the opposite effect for the home team. In the bottom of the sixth, Jace Peterson’s three-run homer halved the Giants’ lead, and (remember this name) Adonis Garcia’s follow-up double chased San Francisco starter Matt Cain. A Nick Markakis RBI single scored Garcia, and the Braves ended their productive sixth inning having trimmed the Giants’ six-run lead to two.

Atlanta would edge even closer in the next inning, thanks to a solo shot from the once and prodigal BABIP king Chris Johnson, but a two-out rally in the top of the ninth allowed the Giants to extend their lead to 7-5.

Two San Francisco relievers later, the Braves were down to their final out, trailing by two with no men on. Johnson kept his team alive with a hard-hit single, and A.J. Pierzynski’s third hit of the night landed in the outfield seats, tying the game and sending it to extra innings. END_OF_DOCUMENT_TOKEN_TO_BE_REPLACED