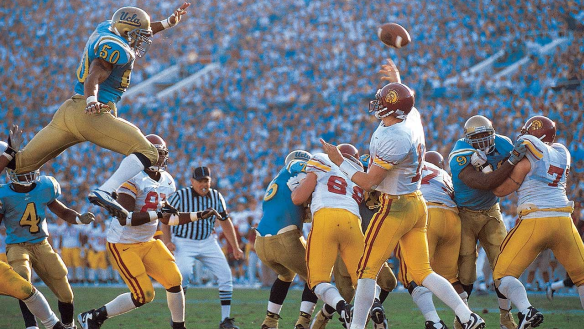 At thirty-six years old, Carson Palmer is the second-oldest quarterback to throw a pass in the 2016 NFL season. In last week’s game against Tampa Bay, the Cardinals signal-caller threw thirty-one passes, completing eighteen of them for 308 yards, bringing his career total to 40,615.

Schrags is right: here’s Palmer right up there on the all-time list, ahead of both Unitas and Montana.

It’s tough to write successful biographies while the subject still is alive, and it’s tough to evaluate the legacies of athletes while they still are playing, but you can be forgiven if you think Palmer might not quite belong in the company of Montana and Unitas.

The NFL has changed a lot since Montana was leaving his championship mark on the sport, and it’s changed even more since Unitas made waves simply by wearing hightops in a game. In short, the 40,000 passing yards threshold isn’t what it used to be, and the modern game is so different from prior eras that comments like Schrager’s, above, say more about those broad, sport-wide changes than they do about any individual achievements. Any longer, it simply isn’t helpful to our understanding of professional football and its players’ achievements to compare, for example, quarterback career passing yard totals.

A better way to understand how Palmer’s career achievement stacks up against those of Montana and Unitas is to contextualize it so we can better appreciate what it means for Palmer to have thrown for more than 40,000 yards in his NFL environment as compared to what it meant for Montana and Unitas to throw for over 40,000 yards in their NFL environments. END_OF_DOCUMENT_TOKEN_TO_BE_REPLACED

Two months ago, who would’ve thought there would be a season this year? Well, probably everybody who actually thought about it. The NFL never was going to cancel this season, just like the NBA won’t miss theirs, and from the fan’s perspective (if not the media’s), the work stoppage wasn’t that big of a deal. But who would’ve thought the 2011 NFL season would look like this?

Probably not too many of you. Moreover, if told that, as work resumed and the season approached, Brett Favre was in talks with another NFL team, who would guess that the once-retired, greybearded quarterback starting in week one would be Kerry Collins?

END_OF_DOCUMENT_TOKEN_TO_BE_REPLACED

Ethan Trex wrote that “if Tom Waits ever writes a sad song about an exhausted journeyman quarterback, it will almost certainly be called ‘The Ballad of Kerry Collins.’”

Bubbling up in the bloggochatter since the announcement this week that the former Titans, Raiders, Giants, and Panthers quarterback was going to join the Indianapolis Colts have been comparisons between Collins and former Packers, Jets, and Vikings quarterback Brett Favre, and that’s unfortunate for everyone.

I first noticed it when a reader pointed me to Jim Wyatt’s post on the Titans Insider blog, and I saw it again in Trex’s post on The Triangle, quoted above. Wyatt hit the theme heavily, opening his post with,

Quarterback Kerry Collins insisted back in July he wouldn’t pull a Brett Favre. “No, no,” he said. “I’m done.”

Yet on Wednesday he pulled a Favre, coming out of retirement and agreeing to terms with the Colts. Collins said in July he was retiring after 16 NFL seasons, including the last five with the Titans. A call from the Colts, who are dealing with lingering injury issues with quarterback Peyton Manning, changed his mind.

Trex started out with a Favre theme as well, although, to his credit, he didn’t attempt to coin a phrase when he lamented:

Great, now we’re going to have to put up with the Great Kerry Collins Un-Retirement Watch every August until the end of time. We finally get Brett Favre’s career put in the ground, and you job us like this, Kerry?

Admittedly, Collins shares some things in common with Favre, like persistent, gray, stubbly facial hair. But we shouldn’t be so quick to apply the “pulling a Favre” label every time a player unretires. What’s important to remember about Favre is how he went about his “retiring” and “unretiring,” if it even can be called that. He never really shut the door at the end of a season. He kept himself in the spotlight through strategic PR moves. In short, he milked it. And he did it multiple times.

If we have to talk about “pulling a Favre” every time a player comes out of retirement, we unfairly cast a negative light on something that need not be negative at all, and we diminish the magnitude of the terribleness that was the actual Favre’s retirement process. To even approach Favre status, Collins is going to have to do this a few more times and make a bigger stink about it. Until then, he’ll just be the next guy to try to “pull a Testaverde.”

August is known as a slow sports month, which means it probably isn’t the best time to start a new sports website, but here we are. An NFL labor dispute provided a compressed preseason that offered some contrast to that part of the baseball season right before most people wake up and start watching again (which means it’s exactly when the Tigers will go on a tear (and as soon as I write that, for them to blow it in the 10th against the D-Rays)) and that part of the NASCAR season where drivers are still screwing around, oblivious to the fact that the lack of urgency probably will cost them a spot in the playoffs.

Revelations about the Longhorn Network grew into the second annual Texas A&M-SEC flirtation that again has fizzled, and the news of brazen NCAA violations at UMiami are simultaneously so flagrant and unsurprising that there’s not much to add to Charles Robinson’s initial report. And so we cover year-old mascot news.

On the sports blogging front, famous ex-benchwarmer and blogger of the people Mark Titus of Club Trillion apparently now is writing for Grantland, to no tidings whatsoever. I can’t decide what to think about this. Everywhere but on this site, Grantland has been taking it on the chin pretty badly, and even I’m beginning to find The Triangle’s daily sports update by Shane Ryan unreadable. Titus has been the anti-establishment candidate for as long as he’s been a public figure, and probably longer, so it’s tough to see him alongside the purported literary elite that populate Grantland, even if that site’s natural audience surely must be welcoming his voice.

While that relationship, to the extent it is one, remains in its embryonic stages, a new site lurks on the horizon. The Classical, a conceptual rival to (at least the idea of) Grantland, is slated to get rolling possibly by the end of this year.

Sports bloggers probably fall into two camps: the big time, corporate types viewed as influential but out of touch, and the small time, snarky, critical types viewed as operating on the rumor level as much as the cutting edge. Whether internet sports writers are generally clueless reactionaries or hypercritical gossipmongers, they managed to pull it together for uniformly positive and heartfelt responses to the news that Lady Vols’ basketball coach Pat Summitt was diagnosed with early onset dementia. (See here, here, and here, among many other examples.)

All this to say that, today, I traded the slow sports news for the non sports news when I saw a commercial during the TV dead zone that is 6:30-7:30 pm Eastern for a text messaging contest on Wednesday night. I haven’t been able to locate the details on this particular contest online, but apparently these things happen from time to time.

Texting is not a sport, and neither is gambling, but for someone who likes writing about sports (and, really, writing about writing about sports), gambling on sports has a certain, vague attraction, even if I don’t gamble myself, and so I took in Bill Barnwell’s second dispatch from Vegas for Grantland. Of course, I’d trust Barnwell’s betting advice as much as I’d trust that of former vice presidential candidate Wayne Allyn Root or Danny Sheridan. Barnwell does provide some background information on gambling terminology and strategy, though, and that’s nice even if it isn’t always accurate. What I do enjoy from him are the parts of his submissions that talk about the history of Las Vegas, and about trying to find a way to live there and maintain sanity and financial solvency. Having spent just twenty-six (consecutive) hours in Vegas, I have just enough personal experience to enjoy following Barnwell on his desert adventure. We’ll see how long my jealousy lasts.

Finally, Wednesday saw the fruits of a story I’ve been trying to cultivate since the early days of The Triangle and Google+, which is to say, July. It was then that the unappreciated legacy of Kerry Collins, associated more with memories of problems with alcohol and, per the New York Times’ “Black People” section, misplaced racial epithets, than gridiron greatness, came to my attention:

Collins retired this week, which, considering that I happened to graduate from the same college at around the same time, and considering that he once (rightfully) mocked me in a pizza parlor after I got wildly intoxicated on sambuca, seals both of our journeys from misbegotten youth into adulthood. And while we’re here, I would like to note that Collins has more passing yards than Jim Kelly, Donovan McNabb, Phil Simms, Steve Young, Y.A. Tittle, Johnny Unitas, and Troy Aikman. If he had won the 2000 Super Bowl with the Giants, and then made the Super Bowl with the 2008 Titans, he would be a borderline Hall of Famer. As it is, he has to be considered as the most underrated decent-to-very-good quarterback of the past 15 years.

The author makes a fairly remarkable point here, even excusing his sambuca-driven intoxication, and it’s one that Chris Johnson, Collins’ former teammate in Tennessee, mentioned in my fake interview with him the other weekend. Bill Polian, president of the Indianapolis Colts apparently got the memo too, because he pulled Collins out of retirement as insurance for an ailing Peyton Manning. And there’s the ALDLAND news/non-news cycle. Good keeping up, all.

After heading north of the border for last week’s interview, it only seemed right to turn things around and seek some warmer weather and talk to a current– if temporarily, but willfully inactive– player named Chris: Tennessee Titans running back Chris Johnson.

Arguably the league’s fastest and best running back since the Titans drafted him out of East Carolina University prior to the 2008 season, Johnson currently is holding out from this year’s lockout-compressed training camp in the hopes of securing something around $30 million in guaranteed money.

This isn’t CJ’s first contract dispute either. 2009 was a record-setting year for him (2,006 rushing yards, 2,509 total yards, 14 touchdowns, 5.6 yards/carry), and he demanded a restructured contract before the 2010 season, and the Titans ultimately gave in. Johnson’s prediction that he would shatter Eric Dickerson’s single-season rushing record (2,105 yards) by rushing for 2,500 yards in 2010. Instead, he had 1,364 yards on the ground (1,609 total), well short of the record and his personal goal, though still good numbers.

For this imagined interview, I agreed to meet Johnson for lunch at McDougal’s in Nashville…  END_OF_DOCUMENT_TOKEN_TO_BE_REPLACED