College football’s second week didn’t go so well for some of the teams on which we keep a closer eye here at ALDLAND. No controversy or arguments, really. Just poor performances and bad outcomes. Two days later, I’m left with two main questions:

Saturday night’s Michigan State-Oregon game lived up to the hype, through the end of the first half, anyway. During the intermission, the Ducks figured out that the one, very real weakness of the Spartan defense was its secondary. Oregon quarterback Marcus Mariota was having no luck creating much of anything on his own, but if he could get the ball out of his hands, his receivers often were very open and had an easy time tacking on extra yards. Everything else seemed pretty good for Michigan State, and I’m not worried about how they’ll handle their conference schedule. At least against Oregon, though, the secondary looked like a real and easily exploitable problem. My question is whether this is a quick fix or a season-long problem.

2. How soon is too soon to fire Derek Mason?

I have an extremely selective (read: poor) memory, but I don’t think Vanderbilt has had two games as bad as the two they’ve played this season in three or four years. A 37-7 loss to Temple and a 41-3 loss to Ole Miss pretty much says it all. USA Today called the latter “just total destruction.” Yes, the team lost its starting quarterback and a pretty good receiver named Jordan Matthews, but these guys look like they caught World Cup fever in the offseason and thought they were out for the soccer team. I don’t think David Williams should take the kneejerk reaction of firing head coach Derek Mason in Mason’s first year on the job, but Commodawg raised the question while we were watching the game, and the regression VU fans are seeing really is shocking. I think it’s okay to ask: If Vanderbilt continues to follow its current trajectory, would you consider firing Coach Mason in the 2014 calendar year? 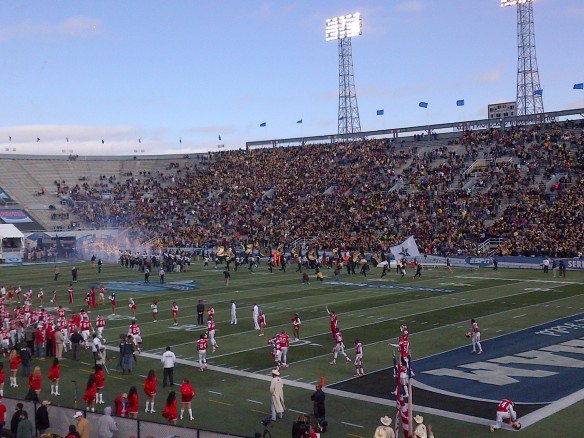 As reported, we went to watch Vanderbilt and Houston play in the Compass Bowl on Saturday, and from the start, my first trip to Birmingham did not disappoint. Arriving into town, I had my first new experience of the day: a traffic jam of cars decked out in Commodore regalia trying to get into the game. Some people complained about logistical failures surrounding the game, but I saw none, and this traffic jam was a good sign of the growing support of the program.

Once inside, we quickly found our seats, or some seats anyway, which happened to be on the Houston side of Legion Field, the site of soccer matches during the 1996 Atlanta Olympics. I didn’t know if anyone from Houston would come for this game, and while the crowd (reported attendance 42,717) was probably two-thirds Vanderbilt fans, Houston’s band, cheer squad, and Texas rangers were there in full force. (I’m using the term “Texas rangers” to describe the male students shown in the picture above in the light brown longcoats and matching hats. Click the photo to enlarge it, or see a closeup here.)

The festivities really got underway when something called “Black Jack Billy” sang the national anthem as two men using American/POW-MIA flags as parachutes and emitting thick clouds of USA-colored smoke circled and landed on the field. (Video.)

After all of that, some football started happening, for one team, anyway. While Houston netted twelve yards of offense and no first downs in the first half thanks to an ineffective passing strategy, Vanderbilt moved the ball relatively easily, particularly on the ground, and went into the locker room at halftime with a 24-0 lead. END_OF_DOCUMENT_TOKEN_TO_BE_REPLACED

For the third consecutive year, Vanderbilt is playing in a college football bowl game, and, I am fortunate to be able to say, for the third consecutive year, I will be in attendance. (My usual bowling companion is unavailable this time, but ALDLAND’s own Physguy will be joining me.) After two games– the Liberty and Music City Bowls– inside the state of Tennessee, Vanderbilt achieved their goal of playing a bowl game outside their home state when they accepted an invitation to play in the Compass Bowl in Birmingham.

My preview post of all of this year’s bowl games has been called “Pulitzer-worthy,” and while my prediction record has proved middling at best, I stand by my prediction for the Compass Bowl:

Vanderbilt will make it three bowl appearances in a row when they play Houston in the Compass Bowl on January 4 in Birmingham. Considering they’ve only played in six bowl games ever before this season, that’s a pretty remarkable achievement. This is their fourth bowl game since 2008, and they bring a 2-1 postseason record from those games into this one. Mobile backup quarterback Patton Robinette will start the game for Vandy on account of starter Austyn Carta-Samuels’ season-ending injury. Carta-Samuels played his last three games this season– all VU wins– with a torn ACL. Another Vandy note: Commodore players donated their bowl per-diem stipends to a children’s charity. Houston has had a resurgence in recent years, but they aren’t the same without Kevin Sumlin, Case Keenum, Clyde, and Olajuwon. The Commodores should register another nine-win season.

Vanderbilt’s opponent, Houston, also finished the year with an 8-4 record, posting wins over Rutgers and South Florida, as well as a shutout win against SMU. The Cougars struggled in the second half of the season, however, while the Commodores finished strong. Tomorrow marks the first-ever meeting between these two teams. It also will be the last-ever game for SEC-leading receiver Jordan Matthews in a Vanderbilt uniform.

As always, keep track of our coverage here and on Twitter. The game starts at 1:00 Eastern on ESPN.

ALDLAND’s weekly football roundup is back following week three of college football and week two of the NFL.

ALDLAND was in Nashville last weekend (as if it isn’t always there) for the Florida-Vanderbilt game and sundry Music City revelry. I was at the game on Saturday night. Bdoyk could not take a break from forty-eight straight hours of honky tonking to attend. Magalan was supposed to be in the stadium too, sitting a row behind me, but I never did spot him on the inside, which likely was due to my inability to visually identify him in his Gator colors.

The Vanderbilt defense seemed to encounter the same challenge, demonstrating difficulty stopping the Florida run game in general, and mobile quarterback Jeff Driskel in particular. In my game preview, I suggested that the relevant analogy for this VU opponent was Georgia. Instead, the game probably was more similar to Vandy’s game earlier this season against Northwestern. While the Dores grabbed an early lead in this one, they were unable to maintain it. Still, the game was exciting throughout, the home team rarely beyond a one-score deficit until Driskel’s back-breaking touchdown run at the end of the game.

A bright spot for VU was wide receiver Jordan Matthews, who had eight catches for 131 yards and a touchdown. The spotlight also shone on Coach Franklin and his staff, though, and the Commodores’ inability to run plays quickly at the goal line late in the game was a little concerning. Still, in a game in which Driskel topped Tim Tebow’s school rushing record, the little things aren’t going to be outcome-determinative.

One last printable highlight of the weekend came before the game started, when top golfer and Vanderbilt alum Brandt Snedeker stopped by our tailgate for a chat with some of his old buddies on his way into the game.