Last year we brought you a live-blogging event of the first and biggest race of the NASCAR season, the Daytona 500. Resources and circumstances preclude similar coverage for this year’s big race, which certainly will be overshadowed by the disastrous crash that resulted in over a dozen fan injuries at the end of yesterday’s Nationwide race, however. Instead, we hope you’ll accept this photograph of pals Mark Martin and T.I. catching up this morning before the race. 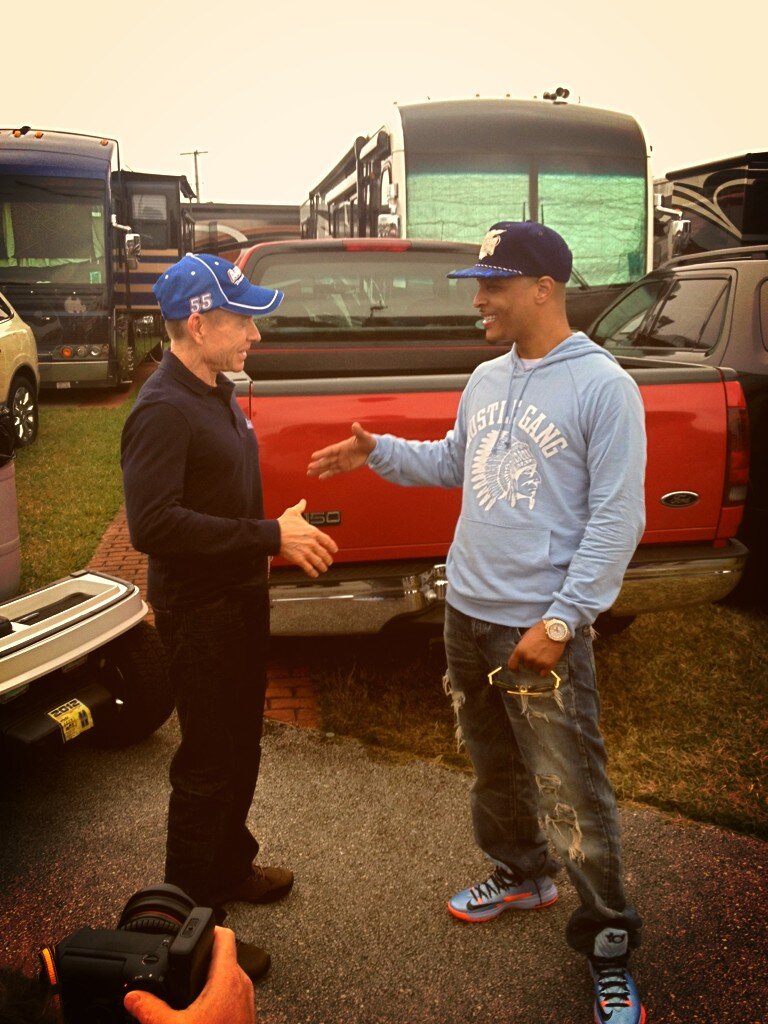 We’ll be keeping an eye on developments at the track, so check back here and on twitter for updates.

Nascar is a sport in need of a tuneup. Attendance has been slipping; viewership has been falling. But Sunday at the Daytona 500, America’s premier form of motor sports will be getting the overhaul it needs.

Originally scheduled to start on Sunday afternoon, the Daytona 500 eventually finished in the early morning hours Tuesday, when Matt Kenseth took the checkered flag. During that time, the Great American Race experienced a full rainout on Sunday, another rain delay on Monday, and a two-hour red flag on Monday night after Juan Pablo Montoya’s car locked up coming out of the pits on a caution necessitated by David Stremme’s engine blowup (his wasn’t the only one– Jeff Gordon’s blew up too) on about lap 157 and slid into one of the jet dryers that was cleaning the track during the caution. Montoya’s car tore a hole in the jet dryer’s fuel tank before bouncing to the infield and catching fire. As jet fuel poured out of the service vehicle, it too caught fire, and proved challenging to extinguish.

They eventually did, though, and Kenseth won the race when it restarted with forty laps to go, fending off Greg Biffle and a charging Dale Earnhardt Jr., who finished second. If this race was any indication of what the 2012 season will be like, we’re in for a long and exciting one.

Tomorrow, the first and biggest race of the NASCAR season rolls off for 500 miles in Daytona, Florida. Trevor Bayne, just 20 years old, introduced himself to the wider world with his surprising win a year ago, and although he ran a majority of his season on the second-tier Nationwide Series, he’ll be there tomorrow to defend his win. It will be an uphill battle for him to repeat, though: he starts in the 40th position.

Bovada (formerly Bodog) has a Bayne win at 16/1 and likes Kyle Busch (5/1), Dale Earnhardt Jr. (5/1), and Tony Stewart (7/2). Stewart is the defending Cup champion, and after reeling off five wins in the ten-race Chase (the playoffs) to win it all last year, it’s easy to see why he’s favored in the season-opener this year. Kyle Busch has been strong in the first half of the season the last few years, so it makes sense that he would be a favorite too. Cynics might see Earnhardt Jr. as a sucker bet up there, slotted because his popularity, which outpaces his performance, will net the house some easy money, but he never can be counted out, especially at a track like Daytona, which best suits his driving style and where he has won before, and especially because he drives for Hendrick Motorsports, the best team in the sport. Roush is the next best team, and two of their drivers– Carl Edwards and Greg Biffle– are starting first and second on Sunday and have to be considered strong contenders as well.

Finally, Danica Patrick may be the biggest story going into Daytona this year, as she makes the jump from open-wheeled racing to stock cars on NASCAR’s biggest stage. She’s in good hands working with Stewart, but other successful IndyCar drivers have struggled to make the transition, and one has to expect that it will take her time to adjust as well. Still, she’s finding early success. Everyone’s focusing on a very bad wreck that was not her fault during the final lap of one of the pre-race races (I know), but she starts a respectable 29th on Sunday and has the pole position for today’s Nationwide race, remarkable for any rookie driver.

The full starting grid is here, and the top ten looks like this:

Other stories to read before tomorrow’s race:

Finally, a programming note: ALDLAND will be hosting its first live-blogging event during tomorrow’s race. Check back here or on our new Podcasts & Live Blogging page for details.