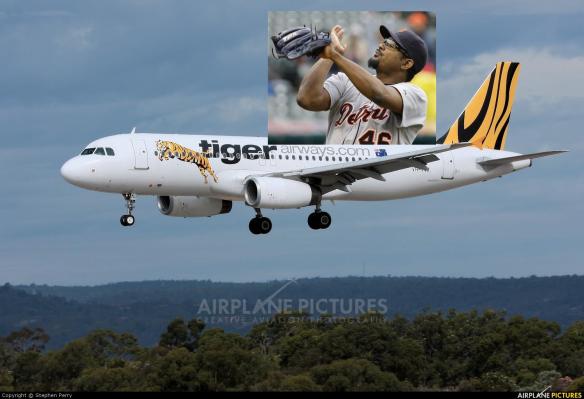 Airships are away in the Detroit Tigers empire as I write. After a crash landing at the final destination of the team’s only West Coast trip, the Tigers limped back to the Motor City, and promptly (indeed, retroactively) placed Octavio Dotel, who has been pitching without a functioning elbow since Oakland, on the disabled list. In immediate need of bullpen reinforcements, GM Dave Dombrowski & Co., air traffic controller furloughs be damned, revved up the sky fleet. The first move was to bring the franchise’s top relief prospect, Bruce Rondon, in from Toledo, something that admittedly is unlikely to require the services of a jet airliner. But then! Wheels up! Jose Valverde is on a flight to Detroit RIGHT NOW! The town and team turned on the once-perfect (49-0!) reliever after a down year last season, but now, in their need, redemption? The front office is mum for now, but the implication from Valverde’s comments this evening is that, at the end of his short-term minor league contract, he will sign a one-year contract with the club in Detroit.

What does all of this mean for a should-be frontrunner floundering in third place in the weak AL Central with a .500 record? Even though it’s early, and fans of baseball teams that struggle early love to rail against “small sample sizes,” we can set aside results and other numbers and acknowledge that the bullpen was working way too hard this month, and two fresh, if unsteady, arms are sure to provide at least temporary relief for a staff that seems like it could use a collective deep breath. For Rondon, my hope is that he’s ready for the big leagues. For Valverde, I just hope he has enough left to allow the coaches to use him in a way that helps the team. That may be ending this jet-set flourish with something of a sigh, but let it be, in part, a sigh of relief as you remind yourself that at least it wasn’t Brennan Boesch’s birthday flight that landed at DTW this evening.

It is tough to feel really pumped up about 9-9 for this group, and when the Tigers opened the season by dropping two of three to the Twins, I definitely was feeling a little down, especially as I recalled the team’s hot start in 2012. Things didn’t go perfectly last April either, though, and as my thoughts drifted back to that time, I recalled an uplifting release from Detroiters Dale Earnhardt Jr. Jr., about which I wrote a year ago. After the imperfect opening series in Minnesota, I thought another anthem might be in order:

@ALDLANDia only 3 games in…they'll be fine

Never hurts to ask, and last year’s video was cool.

Staying in the Soul Department, Max Scherzer, who finally is starting to get the attention he deserves for his on-field work as an ace pitcher, took a heartbreaking look back at what was happening in his family off the field last season in this excellent article on ESPN.com. While a few details leaked out about the reason for Max’s sudden, brief departure from the team last summer, this was the first time I’d read the full story. It’s a must read for anyone, and it easily is the best thing written about a Tiger this year.

More on the bullpen? Ok. Rick Porcello had a rough go of it as a starter against the Angels this weekend, giving up nine runs in the first inning. Suffice to say, not many hitters are going to fear him in his next start, which could come against the Braves on Saturday. A number of Detroit fans have suggested that Porcello, a ground-ball pitcher fronting a weak fielding defense, might do better coming out of the bullpen (see, for example, this article, which argues credibly for a Porcello-Smyly swap), where we have visual evidence of batter fear:

If you know who Mark Fidrych was, you probably are either a Tigers fan or a baseball fan older than the average age of the current Tigers roster. Sports on Earth has a top-notch interview with Doug Wilson, author of The Bird, a new biography on one of baseball’s all-time most interesting individuals. It’s early, yes, but this ranks as my second-favorite Tigers-related article of the season behind the Scherzer piece linked above. Before Fidrych died in 2009, I saw him throw out the first pitch at a Whitecaps (Tigers Single A affiliate) game.

After this series’ last installment‘s heavy focus on hitting, I had to focus on pitching this time around, but we shouldn’t go much further without noting the early season success of Torii Hunter. His offensive success is readily apparent to anyone watching, and he has been a consistent bright spot in an inconsistent lineup. The numbers also show just how well he’s done so far.

Rondon and Valverde aren’t the only ones jumping flights to Detroit this week. I’ll headed there too to watch the Tigers host the red-hot Atlanta Braves, and as a recently displaced Tigers fan, I certainly am excited to get back for a game. For any fans who’ve made it to the end of this post: What’s your favorite pregame bar near Comerica Park? We love Detroit Beer Company and are open to other suggestions.