We’re a dozen games into the season and the Tigers, with a few hiccups, are off to a respectable 7-5 start. Despite the day/Pacific time starts and my living outside the Tigers Radio Network, I’ve been able to keep decent track of these first few series and, while mindful of small sample size they represent, I was beginning to notice something concerning.

Last year’s Tigers series on this site was entitled “The DET Offensive” because, with the addition of Prince Fielder, the team figured to be an offensive powerhouse. Detroit made it to the World Series– no complaints about the outcome here– but they didn’t exactly run away with things, barely overcoming the Chicago White Sox to win a weak division. They also didn’t exactly score at will. In fact, the 2012 team was slightly below average in the American League for runs per game.

It’s frustrating when your team is supposed to be built to score and they can’t, and it’s especially frustrating when they can’t seem to come from behind to win. It seemed like Detroit often would jump out in front early, but if the opposing team later took the lead, a late-inning comeback likely was out of the question. Tiger fans knew that fielding defense was supposed to be a weakness but that offensive firepower was supposed to overcome any inability to hold a lead. When it was needed in the late innings, though, that offense often failed to materialize.

If anything, 2013’s Tigers have an even more robust offensive roster, with Victor Martinez and Torii Hunter joining Fielder, Miguel Cabrera, and the unsung Austin Jackson at the top of the batting order. Last year’s fielding defense wasn’t as bad as everybody thought, and with four great starting pitchers, the only major question was the bullpen.

Detroit’s “closer by committee” approach to relief pitching has been anything but coherent this year, as everyone has noticed. Not as many people are taking a critical look at the Tiger bats, however, and it’s more than Martinez’s slow start: once again, Detroit can’t come from behind to win games late.

I’m not sure if the above discussion of 2012 represents some reverse-projecting on my part, but I know that when I had a few days to think about the first twelve games of this season, I realized I had the definite feeling that this team was having trouble scoring runs when they needed them in the later innings, and it felt like a continuation of something I had noticed last year, so I decided to test my theory against the numbers.

I couldn’t find any run/inning distribution analysis online, so I decided to make my own: 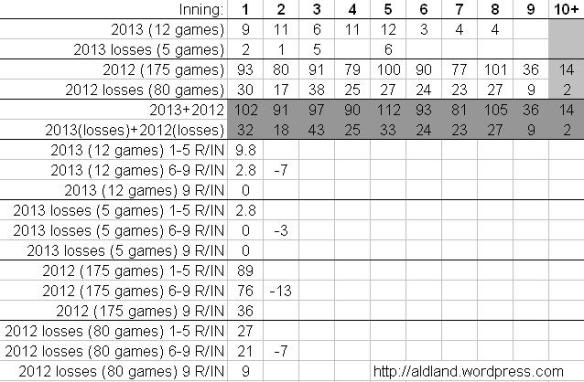 This chart tracks the Tigers’ runs per inning (“R/IN”) for this season and all of last season, including the playoffs. The “10+” column totals all extra-innings runs in one place. The losses rows for 2013 and 2012 break out as a subset of the totals for each season the R/IN for all the games the team lost over the associated period. The dark grey rows total the R/IN for all games played this season and last season and the losses subset over that same period. I then broke out average R/IN across the first five innings and the last four (excluding extra-inning runs) and subtracted the former from the latter for a differential between the later and earlier innings. I also isolated runs scored in the ninth inning alone. (There surely are errors of mine in this chart, but the source material came from the accurate box scores at Baseball-Reference.com.)

First, the data for the 2013 season appears to support my feeling that the Tigers aren’t scoring late. Second, the data for 2012 does not quite support my recollection of how things went last season, although the team did score more early than late then, too. One thought I had was that the trend might be more pronounced in losses, but that does not seem to be the case.

Beyond testing my stated perceptions, I also noticed that ninth-inning scoring was particularly down. This may be due to a number of factors, not the least of which is that a home team holding a lead through the top of the ninth doesn’t even hit in that inning, having already secured the win. As I was tallying the 2012 numbers, I noticed– beyond the first three innings– very strong output in the fifth inning. By the time I finished, though, I was surprised to see the eighth-inning total actually surpass all other individual-inning totals, which seemed to be somewhat counter to my perception. (For comparison, R/IN peaks in the early and middle innings seem to be common across other teams.)

This is my first attempt at testing my own perceptions as a fan against statistics and at conducting my own statistical research, so comments are especially welcome.

[Cross-posted at Bless You Boys. -Ed.]

17 thoughts on “Bay of Cigs: Run distribution, science(!), and the liklihood of a Detroit comeback”