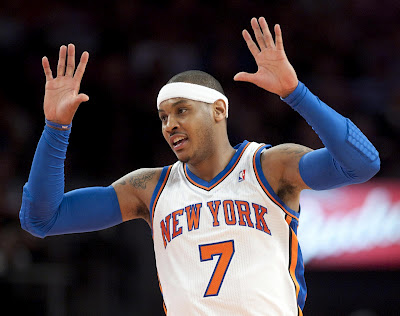 No, it doesn’t have anything to do with appearing in Maryland-area used-car commercials.

Grantland’s Ben Detrick has the story:

Carmelo is hurting the Knicks, but not for the reasons everyone is wailing about. The common perception is that Anthony has been stifling the team’s offense by gumming up the democratic system Lin benevolently presided over. That’s not true. Yes, Anthony has been abysmal this season — his .401 field goal percentage is a career low, his .307 3-point percentage is his worst since 2006, and his offensive rating is eighth on the team — but the problem is elsewhere.

In the nine games since Anthony’s return, the Knicks’ offensive rating has hovered at about 104. (Right now, it sits at 101.7 for the season.) This pace-adjusted stat means that per 100 possessions, they score 104 points.

Let’s compare those numbers to the gorgeous, purring, Lin-fueled engine. During that glorious stretch, the Knicks’ offense also had an offensive rating of 104. And considering five of their nine recent games have been against suffocating defenses, the Knicks’ offense is probably a bit better than when Lin was controlling everything.

The sad truth is that New York hasn’t been effective on offense all year. Not when Lin was starring, not now. But when the team was playing Lin aside blue-collar laborers like Chandler, Jeffries, Fields, and Iman Shumpert, their defensive rating was 97. That would be second best in the NBA if extended over an entire season. The Knicks were winning by stifling opponents and hoping that Lin, then a relatively un-scouted commodity — could figure out a way to win games in the closing minutes.

Over the last nine games, the Knicks’ defense has been putrid. They’ve given up about 108 points per 100 possessions. Over a season, that would be among the worst ratings in the NBA. It’s about the same degree of staunchness demonstrated by the Golden State Warriors and Sacramento Kings.

Cluck at Anthony’s unimpressive defense if you like, but he alone isn’t making the Knicks sieve-like. Stoudemire appears rickety from last season’s back injury and covers significantly less ground than limber teammates like Jeffries and Chandler. And Lin, despite being viewed as a martyr slaughtered on the shrine of Anthony’s arrogance, is being shredded by every quality opposing point guard he faces. It was different when Chandler and Jeffries were waiting for any pipsqueak who breezed by him into the lane, but now his backup support includes a dispassionate Anthony and a hobbled Stoudemire.

Two thoughts: 1) Mike D’Antoni eschews defense, so the good defense being played by a team (i.e., the one with Lin and without Anthony and Stoudemire) that was thought to finally be operating his system comes as a bit of a surprise– or is it an intended but collateral consequence?– and, 2) there are things Lin fans dont want to recognize about him: a) he’s more of a shooter than a Nash-like facilitator (although if he fizzles into a puddle of ineffectiveness before the end of next week, his reel will always have this), and b) the scoutability factor seems to be a real thing. On the second sub-point to the second point, there now exists a blueprint on how to make life very difficult for Lin. Miami’s Mario Chalmers illustrated it on national television. Whether Lin can overcome this challenge, and whether the Knicks can overcome themselves on both ends of the court remains to be seen.