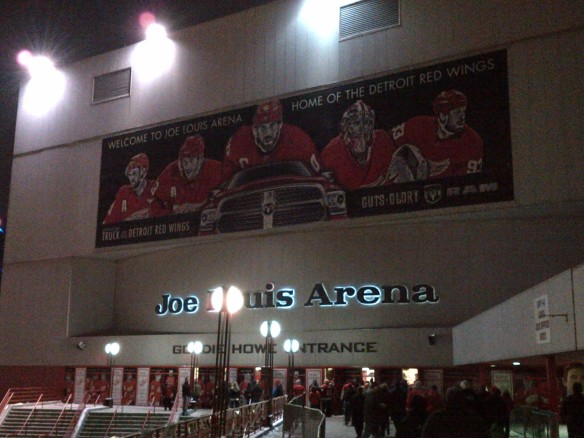 On Saturday, January 18, 2014, the Detroit Red Wings beat the visiting Los Angeles Kings 3-2 in a shootout. It was the best hockey game I’ve ever seen. I’ve watched innumerable Red Wings games over the years, including playoff wins over rivals and Stanley Cup wins. I’ve seen them in person before too, watching them lose to their rivals in Denver, Nashville, and Chicago. (I even saw an intra-squad scrimmage.) This was my favorite game.

It was my first trip to Joe Louis Arena, the historic home of hockey in Detroit for only a little while longer, and everything went perfectly. We stayed in Greektown, where we enjoyed an authentic Greek lunch prior to the game. When we were ready to head to the arena, we took the accurately named People Mover and were there before we knew it.

Once inside, we had time to enjoy the statues of great Red Wings past on a full lap around before finding our great seats, where we watched the team warm up and tried to read all of the banners hanging from the rafters. The experience was extremely satisfying and fulfilling, as was the Little Caesar’s pizza, which is better there than it is anywhere else in the world. 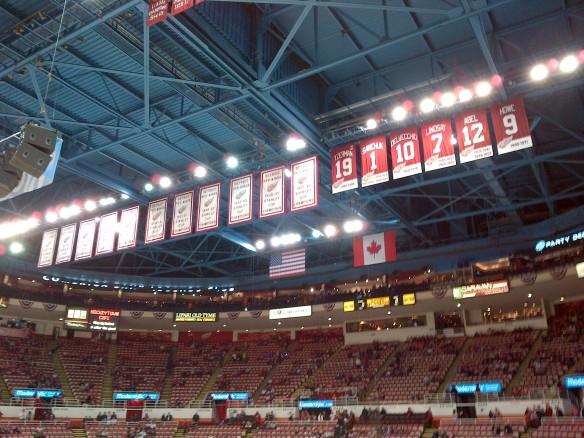 Hockey games are subject to all kinds of random variation, so it was especially wonderful when the game itself matched and then elevated the tenor of the evening. After a scoreless first period, the Red Wings could not kill off successive minor penalties, and the Kings’ power-play goal gave them a 1-0 lead. Less than a minute later, however, Detroit’s Henrik Zetterberg tied the game with an even-strength goal. That sequence essentially repeated itself in the third period, when the Kings scored a power-play goal with just 2:15 to go in the game. Detroit’s Niklas Kronwall tied the score at two with just twenty-seven seconds to go in the game, sending it to overtime.    END_OF_DOCUMENT_TOKEN_TO_BE_REPLACED