The Davy Jones of Major League Baseball, John Jaso, says he plans to retire from the sport and live on his sailboat. As the Deadspin writeup notes, Jaso earned roughly $16.6 million in his nine-year career, during which he spent time with the Pirates, Rays, Mariners, and A’s. Not bad for a catcher-turned-first-baseman/corner-outfielder who amassed 6.1 career WARP.

Of course, it’s also roughly the same amount of money– $16 million– the Detroit Tigers agreed to pay Mike Pelfrey for two seasons of work. Pelfrey now has twelve MLB seasons under his belt and -2.5 career WARP to show for it. His -2.2 WARP in 2016, the first year under his contract with the Tigers, represented the worst season of his career after his rookie year. (Pelfrey rebounded to -0.1 WARP this year for the White Sox, who picked up just $540,000 of the $8 million remaining on his contract when they signed him the first week of the season.)

These are the facts, and, viewed together, they don’t reflect particularly well– though certainly in varying degrees of not-well– on anyone involved with the possible exception of the White Sox, who paid essentially the league-minimum salary for 120 innings of slightly below-replacement level starting and relief pitching. Jaso’s probably holding off on his official retirement announcement until he has an opportunity to meet with Al Avila. 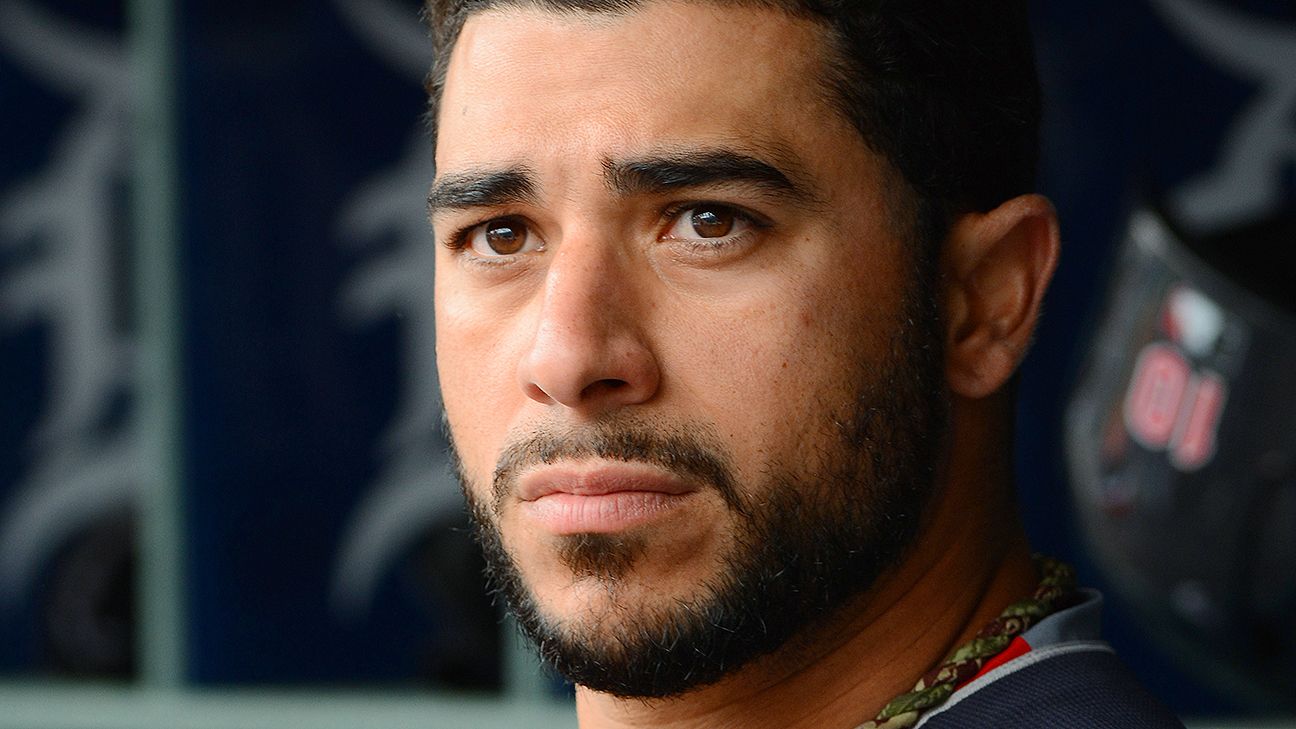 UPDATE: Approximately seven minutes after we published this post, the Tigers took our advice and traded Aviles to the Atlanta Braves.

The Tigers have acquired infielder Erick Aybar for infielder Mike Aviles and catcher Kate Scivicque, according to the team.

It’s reassuring to know that General Manager Al Avila has joined Brad Ausmus as an ALDLAND reader. If you would like to peer inside the mind of the Tigers GM, the original post remains below.

The clock is ticking louder than ever on the Detroit Tigers’ 2016 season, and, just at the very moment the team needs to be putting its best foot forward in an effort to win crucial games that will determine whether they make the playoffs, they are running out some of the worst lineups they’ve used all season.

Injuries are largely to blame for this untimely suboptimal roster utilization, as Detroit currently is without Cameron Maybin, Nick Castellanos, Jordan Zimmermann, Jose Iglesias, Shane Greene, and (sigh) Mike Pelfrey. In addition, Miguel Cabrera left last night’s game with what appeared to be a left shoulder injury, and his status is uncertain. Manager Brad Ausmus, facing this many significant losses, obviously is handcuffed– he has little choice but to lean, undoubtedly more heavily than he would prefer, on his reserves, backups, and alternates.

Modern MLB roster construction, with its emphasis on relief-pitching specialization, leaves little room for backup position players. The Tigers, like most American League teams, essentially have three: a backup catcher, and two other “utility” fielders, who can play a variety of positions whenever a regular starter needs a break, or as a defensive replacement late in games.

For Detroit, those two guys are Andrew Romine and Mike Aviles, and they aren’t very good. Back in June, when Iglesias was struggling, I wondered whether Romine, who appeared to be a very solid stand-in at short when given the opportunity, should take over the job? Nope. Back in March, before the season even started, I was worried about the scouting report on Aviles, which was starkly negative:

Aviles is no longer useful in a baseball sense[, and] his inability to reach base (.279 OBP from 2013-15) makes him a complete zero on offense, while what’s left of his defensive and baserunning abilities have become liabilities.

Harsh and, so far, accurate. Unsurprisingly, when both Aviles and Romine are in the starting lineup, Detroit almost always loses.   END_OF_DOCUMENT_TOKEN_TO_BE_REPLACED

With the 2016 MLB season roughly one-third complete, this series has touched on possible changes the Detroit Tigers might make at the catcher and shortstop positions and now turns to the starting pitching rotation.

To begin with the good news about the Detroit Tigers’ pitching, we almost have to begin with the bad news, which is that the presumptive lock for an above-slot number three starter, Anibal Sanchez, was so bad through his first eleven starts that he’s been demoted to the bullpen. Another potential starter, Shane Greene, has continued to be unable to prove he can hold down a starter role, and still-semi-prospect Daniel Norris has battled injury and efficiency problems that, so far, have kept him in Toledo and out of a rotation spot in Detroit. Thankfully, Jordan Zimmermann and Justin Verlander have, for the most part, been very solid in the first two spots, and rookies Michael Fulmer and, to a lesser extent, Matt Boyd, have arrived this year as big-league-ready starters.

A weakness common to all Tigers starters this year has been an inability to pitch late into games, but the arrival of Fulmer in particular has allowed the team to bolster an already-improved bullpen with extra tweener (i.e., not quite starter material yet/anymore) arms like Sanchez and Greene, with Boyd, who has been a bit homer-prone of late, a possibility to join them in the near future. Brad Ausmus and Al Avila have done a good job of rotating these arms through a suddenly thick bullpen, making frequent use of Toledo options where available, to the point that many Tigers fans are experiencing a creeping and unfamiliar sensation of actual comfort with their team’s pitching staff. These are strange days indeed.

If they want to return to the familiar, however, they need not look too hard, because every fifth game or so begins with Mike Pelfrey on the mound.   END_OF_DOCUMENT_TOKEN_TO_BE_REPLACED

The Detroit Tigers’ new starting pitcher, Jordan Zimmermann, has been excellent in 2016. He’s only allowed two earned runs in five starts, all Detroit wins,  and he didn’t allow a single run of any variety through his first three games. He’s been the number-one starter the Tigers needed, especially with Justin Verlander and Anibal Sanchez offering good-but-not-great performances as they settle into the season. Ostensible fourth starter Mike Pelfrey has not been good at all, posting career-worst numbers virtually across the board. Shane Greene started strong, as he did last season, but a blister has temporarily sidelined him, which allowed the team’s top prospect, Michael Fulmer, to snag a big-league start in Greene’s absence. Daniel Norris showed promise as a starter last season and this spring, but he’s currently on a rehab assignment recovering from a back injury.

As a group, the rotation has been decent, and there are indications that they’ll continue to improve, especially if Verlander can find his groove now that news of his preseason engagement to Kate Upton is public and healthy mixtures of Greene, Norris, and Fulmer can replace Pelfrey before too long.

Overall, this is good news for Tigers fans, who also are enjoying a blissful period of strange and unusual– in light of the team’s recent history– bullpen success. After a month of play, this feels like a satisfyingly complete team.

One potential cause for concern (a Tigers fan always can locate at least one) in all of this good news is that the shiny new Detroit bullpen may have been on display a bit too much through this first month of the season. It’s lovely that they’ve been doing so well, but they need to last to October. I don’t think Brad Ausmus has done a poor job of allocating relief innings among his bullpen staff in 2016, but I think his starters’ collective failure to pitch late into games so far this year has forced him to make more calls to the pen than he’d have preferred at this point.

In fact, among American League teams, only the Orioles are getting less in the way of innings pitched from their rotation than the Tigers:

Viewed from back to front instead of front to back also finds Detroit essentially tied with Baltimore for the AL lead in relief innings pitched per game:

The beginning of May finds the Tigers with a comfortable 14-10 springtime record. We knew the early part of their schedule would be difficult, so it isn’t surprising that the path to 14-10 was somewhat akin to that of a roller coaster. It also is not unreasonable to expect that better teams would chase starters earlier in games than usual.

Even if the heavy bullpen usage has been justified, or, at least, explainable, it isn’t a trend Detroit should try to continue, for obvious reasons, and if you weren’t certain how to interpret this information, a glance at the bad company the Tigers are keeping at each end of the above graphs should offer undeniable clarification of any lingering doubt.

The team has the opportunity to reverse this course tonight, when their once (and future) workhorse takes the hill in Cleveland and tries to reverse a losing trend of his own.