Upton Abbey is our Atlanta Braves series, now in its second season. B.J. and Justin Upton are off to rough starts, but overall, the state of Upton Abbey is strong. Tune in all season long right here on ALDLAND.

The Braves are opening at home this week with series against division foes New York and Washington. They started the season on the road in Milwaukee and Washington, going 4-2 on that trip, dropping just one game in each city.

Atlanta’s young, ascendant starting pitchers were the story heading into the season. That talent vanished with still-shocking swiftness, duplicate round-two Tommy John surgeries, and other injuries clearing out the bulk of the rotation. Still, the remaining starters, led by Julio Teheran and Alex Wood, have looked pretty good so far. Craig Kimbrel remains the best closer in the game, so that’s something that will help reassure a young, trembling group of starters. Reliever Luis Avilan’s hamstring injury, suffered this week, is cause for concern, but you’re getting the theme pretty clearly at this point.

The main non-injury offseason personnel event was the departure of free agent catcher Brian McCann to the Yankees. While the still-raw Evan Gattis (and the wily Gerald Laird) may be able to replace some of McCann’s hitting, we should pause here to note the likely dropoff when it comes to the glove. From 2008-13, McCann was the best catcher in baseball in terms of pitch framing; Laird and fellow Braves backup catcher Ryan Doumit were among the ten worst over that period.

ALDLAND will be at Turner Field for two games this week. Tonight, Commodawg and AD will catch the rubber match in this opening series with the Mets. On Sunday, Physguy comes to town to join AD for the third game of the Nationals series. Stay tuned here and on twitter for the freshest insights and hottest updates.

Related
Preseason BP Nuggets
A Boy, His Granddad and the Monumental Courage of Henry Aaron (via The Bitter Southerner)
Baseball Notes: Lineup Protection
From Barves to Burbs: What’s Happening to Baseball in Atlanta?

I attended my first Atlanta Braves game last night, with the then-AL-Central-leading Kansas City Royals in town for the first of two games in thirty-six hours.

Getting to Turner Field via public transportation is easy, particularly considering Atlanta’s bad reputation for transit. The park itself is nice and clean, with three escalators ferrying us to the top level, where we were sitting. Originally constructed as part of the 1996 Olympic complex (it cannot in any way be overstated how much Atlanta loves the ’96 Games), it does not show its age, even if the third escalator broke down while we were on it, bringing to mind Mitch Hedberg’s bit. But let’s not dwell on the notion of being too lazy to take the stairs on one’s way to sitting and watching three hours of baseball. Instead, let’s note that Turner Field has roving Chick-fil-A vendors and a nice view of the downtown skyline. 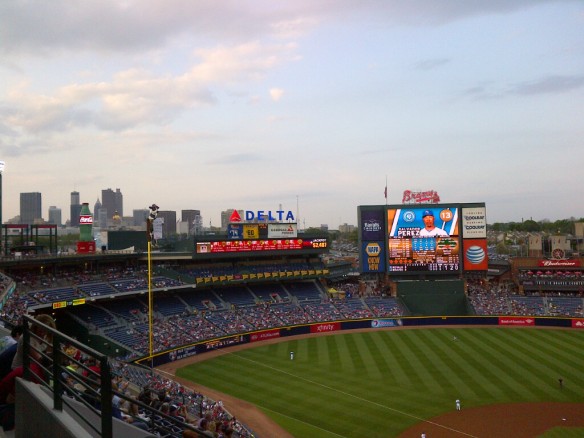 With a seating capacity of roughly 50,000, it actually is bigger than Comerica Park, but even sitting in the top section, I felt closer to the game than one might at some technically smaller parks, and there didn’t look to be a bad seat in the house.

It was good that we were closer to the game, too, because END_OF_DOCUMENT_TOKEN_TO_BE_REPLACED