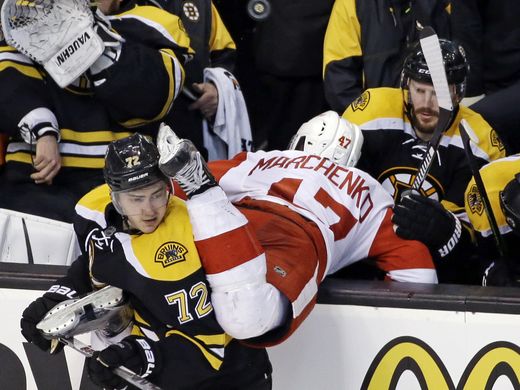 It’s easy to second-guess coaching decisions after the fact, begins many post-loss sports articles, but it was immediately clear that the Detroit Red Wings, and their recently redeemed goalie, Jimmy Howard, were not 100% last night in Boston. The direct evidence? Surrendering two goals on four Bruin shots in the first 2:44 of the game. The circumstantial evidence? A hard-fought win the night before in a game that did not start until after 8:00, delaying the team’s arrival at its Boston hotel until 2:45 yesterday morning. Howard looked sluggish, and his teammates weren’t able to bail him out. Their backs against the wall, Boston hardly let up, eventually claiming a 5-2 win.

The Howard redemption story is a nice and good one, and, if the Red Wings are able to clinch a twenty-fifth-consecutive playoff berth, there’s little reason to believe it can’t continue into the postseason, but hockey, as much as any sport, is a sucker for narratives like these, and they can color strategic decisions. END_OF_DOCUMENT_TOKEN_TO_BE_REPLACED 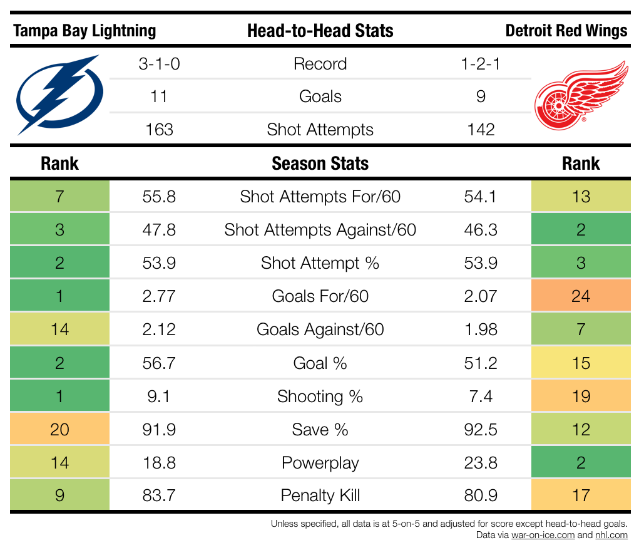 We are headed back to Hockeytown this weekend to watch the Red Wings host the Nashville Predators on Saturday night. My first time at Joe Louis Arena, one year ago, was so great, and I can’t wait for this next visit.

Detroit and Nashville used to see a lot of each other when both played in the Western Conference’s stacked central division. They have fewer opportunities to square off since Detroit’s move to the Eastern Conference this year, though, so each meeting takes on greater importance.    END_OF_DOCUMENT_TOKEN_TO_BE_REPLACED

Yes, hockey’s been back in season for a few months now. In fact, in terms of games played, the eighty-two-game season already is past the halfway point. With college football done, the NFL effectively over, the NBA continually unwatchable, and college basketball not quite fully warmed up, this is hockey’s time to shine.

It also is time for another ALDLAND field trip. The Detroit Red Wings are my favorite hockey team, and while I’ve been fortunate enough to see them play a handful of times– in Colorado, Nashville, Chicago, and a scrimmage in Grand Rapids— on the road, I’ve never seen them in their famous home, Joe Louis Arena. When I realized last spring that the Joe’s days were numbered, I knew I had to make it there for a game. Thankfully, that time has come.

On Saturday night, Detroit hosts the Los Angeles Kings, the former Western Conference foes’ second meeting in a week. The Red Wings beat the defending champs 3-1 in L.A. last Saturday, and they’ll try for a sweep of the season series this Saturday.

Both teams are sitting in the middle of their respective divisions, but the Kings (28-14-5) have a decidedly better record than the Red Wings (20-16-10). Los Angeles also has the advantage in goal with Jonathan Quick, while Detroit’s recently returned starter, Jimmy Howard, still is finding his legs in the crease.

In general, the Red Wings’ injury report is full of familiar names, making it hard to know how good this team, if healthy, could be. Until its frontline starters return, Detroit has been forced to offer essentially an extended, NHL-level audition to its young prospects. This obviously is not a long-term solution, but it does seem to have infused some new energy into their team as the young players try to make the most of their opportunities on the big stage.

I’ve been to Detroit for baseball games, some of which have been described on this site, but, as stated, never for a hockey game, so I have been soliciting suggestions elsewhere, and I will do the same here from anyone with prior Hockeytown experience. (I’m already planning to start my day with a generous bowl of Detroit Hockey Heroes cereal, but let me know about anything after that.) Please use the comment section below.

Thanks, and go Red Wings!

You can watch the game on your regional Fox Sports Detroit and West channels beginning at 7:00 Eastern, and we’ll have updates here and on twitter.

Related
The NHL is back. Here’s the best thing you can read about it.