My first article for The Hardball Times takes the time machine back to the strike-shortened 1994 MLB season, where we find much historically significant activity in progress. Would Tony Gwynn have hit .400? Would the Montreal Expos finally win that elusive World Series championship? Could Gene Lamont predict baseball? Marshaling something approaching my best efforts, I make attempts of varying degrees of rigor to answer those questions, undoubtedly raising many more in the hopefully mildly entertaining process.

Jonah Keri has completed the keystone work of his young life with Up, Up, & Away: The Kid, The Hawk, Rock, Vladi, Pedro, Le Grand Orange, Youppi!, The Crazy Business of Baseball, & the Ill-fated but Unforgettable Montreal Expos. While Keri surely will continue to be one of the top baseball writers of this generation, he was born to write this book about his dearest baseball love.

The book tells the full story of the Expos franchise, beginning with pre-Expos baseball in Montreal, which included the minor league Montreal Royals, a team that counted Jackie Robinson and Roberto Clemente among its alumni, through the bitter end and the franchise’s departure to Washington, D.C. Readers learn about Montreal and the men who brought Major League Baseball to that city (and Canada) and administered it while it was there, but Up, Up, & Away really is a fan’s story of the talented characters who wore the red, white, and powder blue.

The Expos generally had two peaks in their thirty-five-year history. The first came in the early 1980s, END_OF_DOCUMENT_TOKEN_TO_BE_REPLACED 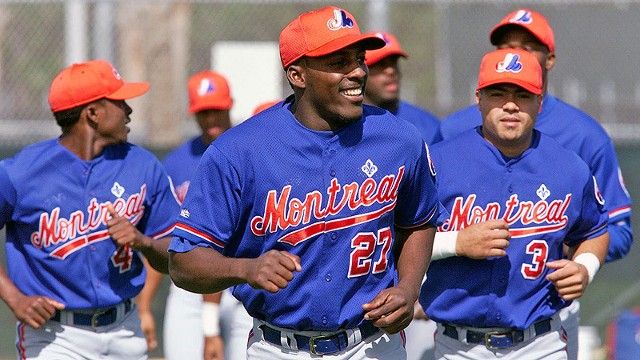 From the first time the baseball world got a look at Vlad, it was clear we were dealing with a very different kind of subject. Read Dan Le Batard’s Guerrero profile from 10 years ago and you begin to understand why. There are the usual stories of future sports stars growing up in poverty … and then there’s Vlad, who drank from puddles as a child and had to share two beds with six other family members after a hurricane blew the roof off the Guerreros’ shack. There are the usual disconnects between English-speaking reporters and Spanish-speaking players … and then there’s Vlad, who’s so shy about his lack of education and a fear he’ll be perceived as unintelligent that he rarely talks to anyone outside his immediate circle.
…
And yes, he approached the game differently from anyone else, including sizing up opposing pitchers by facing them on his PlayStation. One of the oldest axioms in sports is to practice the way you play. No problem for Vlad. He swung at everything on PlayStation, too.
…
People tell stories about Vlad the way they might about Roy Hobbs, if he were real. I once saw Vlad make a diving catch over an alligator in right-center. Oh yeah? I once saw him hit a ball that landed in Moose Jaw. Pfft! You weren’t there when he threw a guy out at home while lying in a sleeping bag in the right-field bleachers while his mom read him ghost stories.

Thing is, everything short of gators and Moose Jaw and sleeping bags actually happened. … Read More

This month, Major League Baseball announced that it would be expanding its playoff field, starting with the upcoming season, by adding a second wild card team in each league. While Twitter-age baseball analysts roundly lamented the slow speed with which this announcement came, it looks like a lightning strike when compared to another still-waiting reform, instant replay, that has been “under advisement” for years.

I have written at length elsewhere about the importance of examining incentives to understand the real rationale behind a situation with apparently conflicting internal logic. Over at The Classical, Matthew Callan suggests that such an analysis will prove illuminating in the case of MLB reforms:

Bud Selig is arguably the most transformative figure in the history of Major League Baseball. Under his watch, we’ve seen more changes to the way the game is played and consumed than at any other time in the sport’s history.
…
Twenty years ago, adding a play-in game at the end of the regular season would have sent the game’s gatekeepers into fits of great weeping and gnashing of teeth. In the Bud Selig era, we hear nary a peep.
…
It’s telling that whenever he discusses the matter, Selig always makes sure to note how much the teams request it. “Clubs really want it,” he said back in January. “I don’t think I’ve ever seen an issue that the clubs want more than to have the extra wild card this year.”

When Selig says “clubs,” he means the owners thereof, all of whom stand to benefit from a play-in game and the additional revenue attended thereto. Selig has never shed his owner’s mentality, and every change under his watch as commissioner . . . has been allowed for the primary purpose of lining owners’ pocketbooks.
…
This isn’t to fault Selig, necessarily—if he didn’t grow the game’s revenues, he’d be a bad commissioner. However, it does explain the one change he remains reluctant to make: instant replay. The new wild card will become a reality mere months after the subject was first broached; in contrast, four years after being instituted on a trial basis, instant replay remains limited exclusively to home run reviews. Which are, as any baseball fan knows, sacred unto actual magic.

That the man who has dramatically altered baseball in countless ways suddenly becomes a traditionalist whenever instant replay is mentioned is hard to explain through anything but his owner’s mentality. His other innovations have the immediate, tangible benefit of increased revenue, but instant replay has none. In fact, it would cost the league money to equip every stadium with extra cameras and review booths and training the umpires to use them.

The lesson? Don’t hold your breath if you’re waiting for instant replay review of MLB’s decision to move the Expos to Washington, D.C. instead of contracting the Milwaukee Brewers.