Paraphrasing scripture, David Crosby wrote in reference to the months of January and February vis-a-vis the baseball media, “to every offseason there is a season, churn, churn, churn,” and so we find ourselves in that season of a season when the game is unplayed, the transactions are slow, and meta-speculation abounds. MLB is set to announce its 2019 Hall of Fame class this evening, which means everybody who’s nobody is talking about the publicized selections of everybody who’s very slightly somebody solely by virtue of having a hall-of-fame vote, which led me to the shared ballot of known typer of baseball words Bob Nightengale, whose selections were surprisingly inoffensive. These days, the things to look for to get a quick read on a voter are whether he or she included or excluded Barry Bonds, Roger Clemens, Mike Mussina, and Edgar Martinez. There are a bunch of names on the ballot, and voters may vote for as many as ten, but I think the quickest way to get a feel for the type of person the voter is is to check the selections on those four players. If you somehow care, Bob was in on all four of those guys.

The selection/non-selection combination that caught my eye was the vote for Gary Sheffield and no-vote for Manny Ramirez. To be clear, I do not care about how Bob voted, and it’s a testament to the failed human experiment that is the internet (probably) how quickly the cult-like obsession around the publicization of MLB HOF ballots has dissipated into wait-was-it-ever-even-a-story? status, but this ballot pairing is interesting to me in part because it wasn’t surprising that any eligible voter would choose Sheffield over Ramirez, even though I think Ramirez probably has a better resume and, in any event, they’re pretty close. Here’s how they stack up on a series of potentially relevant factors: 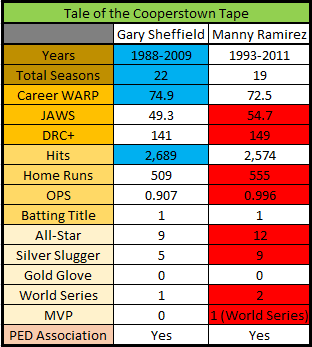 Sheffield has Ramirez by a few seasons and about a hundred hits, which, at those levels, should not be discounted, but things otherwise look pretty good for Manny. I don’t know if either of these guys deserves a plaque in Cooperstown, but if you think Sheffield does, maybe it makes sense for you to think Ramirez does too? Or maybe you just have a weird thing for mid-aughts Tigers. Maybe it’s Sheffield’s work as a World War I historian that tips the scales for today’s writer-voters. Who knows.

My guesses for who will make the cut tonight? (you didn’t ask): Mussina, Martinez, Mariano Rivera, and Roy Halladay. Tune into MLB Network at six if you want the full scoop.

UPDATE: My guesses were correct.