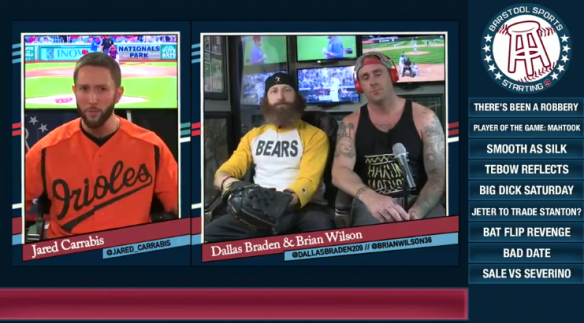 To be fair, there isn’t a large volume of competition in the daily live MLB television show category. By my count, the established programs are MLB Network’s “MLB Tonight,” FS1’s “MLB Whiparound,” and ESPN’s “Baseball Tonight,” all of which essentially compete to be the first choice in baseball wallpaper.

Enter “Starting 9,” a Barstool Sports production that debuted last week and already has surpassed all of its major-network competitors in every facet. None of those shows sniffs the “appointment-viewing” descriptor, which applies to “Starting 9.” It’s the perfect show for baseball fans in both content and delivery. The show airs live Sunday through Thursday at just the right time– 11:00 pm on weeknights, right after East-Coast games have ended, and 6:00 pm on Sunday, between the end of the afternoon games and the start of the primetime ESPN game– and runs for just the right length of time, about twenty minutes per episode. Adding to the convenience is the fact that “Starting 9” streams on Facebook Live and Periscope, allowing the audience an easy second-screen viewing setup.

Although it’s a web-based show, “Starting 9” looks like a show you’d see on a big sports television network thanks to shiny graphics (the 1990s Donruss baseball card visual reference is a particularly nice touch) and a license to air MLB game highlights. “Starting 9” isn’t on a big sports television network, though, which means its hosts– Jared Carrabis; former Oakland Athletic and ESPN broadcaster Dallas Braden; and, at least for the first week, former San Francisco Giant Brian Wilson– are uncensored and unfiltered, leading to a much more natural conversation. It’s everything PTI is supposed to be but never can be.

The hosts have an easy rapport that flows from the homonymous podcast Carrabis and Braden began hosting a month ago, which featured the not-shy Wilson as its first guest. Carrabis has been writing about the Boston Red Sox and baseball generally at Barstool for years, and the site hired Braden (who once pitched a perfect game, in case you hadn’t heard) after ESPN cut him loose in their big round of layoffs this spring.

The show’s first week demonstrated an impressive ability to synthesize the day’s baseball stories, some of which happened just moments before the show went live, into a well-rounded blend of on-field highlights, fan interactions, and other news and happenings that ranges from the serious to the silly.

The benefits a live show were on display during last night’s episode, in which Carrabis and Braden were able to discuss J.D. Martinez’s four-homer game, which was happening during the show.

Last night’s episode also was the first without Wilson, whose absence was noted at the opening. It will be a small disappointment if he is not a regular part of the show going forward, as appears to be the case, since he provides a good compliment to Braden, who can be a little too bombastic at times.

One thing that does not seem to be a problem for “Starting 9” is audience size. Facebook Live viewership during the first week hovered between eight hundred and 1,200 at a given moment, and the Periscope numbers were bigger: I saw anywhere 50,000 to over 100,000. The episodes remain archived on Facebook and the Barstool site itself as well, convenient for those who aren’t able to watch live.

Although the 2017 regular season is nearly over, I suspect that “Starting 9” will continue in some capacity during the playoffs, and I look forward to having it as a part of my baseball routine in the future.