Since the Detroit Red Wings returned to championship prominence in the 1990s following the hiring of head coach Scotty Bowman, the team has been known for its smothering style of play. In this modern golden age, the Wings won four Stanley Cups– 1997, 1998, 2002, and 2008– with legendary rosters, sure, but also by executing a theoretically simple and highly effective strategy focused on puck possession. Two decades before the concept would even begin to emerge in public hockey analysis, Bowman knew that puck possession led to wins.

In recent years, statisticians have made strides in tracking possession, something I’ve written about here a few times before:

A quick refresher on hockey’s new statistics: puck possession correlates more strongly with winning than do things like goals or shots; measuring possession in a fluid game like hockey is difficult; as a practical solution, Corsi and its less-inclusive sibling, Fenwick, are statistics that track certain, more easily measured events (all shots, including on-goal shots and missed shots, and, in Corsi’s case, blocked shots), thereby serving as proxies for possession and, therefore, indicators of team success. Once you get past the names (as the NHL is in the process of doing), the concept is simple.

The earliest season for which Corsi is available is the 2007-08 season. Fortunately for purposes of this post, that’s the last year Detroit, under the guidance of the Bowman Administration’s successor, Mike Babcock, won the Stanley Cup. Anecdotally, Babcock followed in Bowman’s possession-oriented footsteps, and the statistics agree: the Wings led the league by a wide margin.

Today, though, things are different. Sure, Detroit hasn’t missed the playoffs since 1990, but it’s going to be another uphill climb to keep their historic streak alive, with current projections giving them just a 22.5% chance of earning a postseason berth. (Only three teams have worse odds right now.) It isn’t looking good.

Unsurprisingly (as a factual matter, anyway), puck possession has fallen off steeply this year, as compared with that last championship season. Here’s the same chart shown above for 2016:

Under Jeff Blashill, Babcock’s successor, these really aren’t the same Red Wings. Here’s a broad visual of how well the team has controlled the puck during all seasons for which Hockey-Reference has Corsi data: 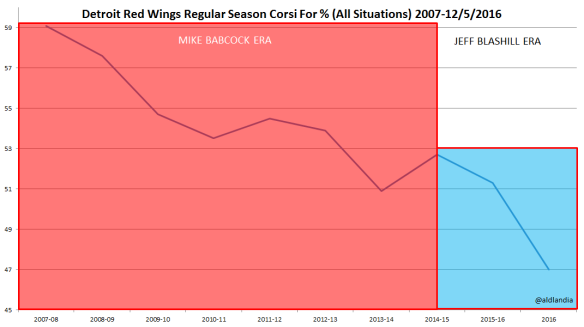 The season isn’t yet half over, thankfully, but there is a lot of catching up to do if the team wants to leave its hallowed home on a positive note before making the move to the Hot-n-Ready Center next season.

Related
Taking a pass on new hockey statistics
Bouncing puck: Passing, not shooting, is the key to scoring on the ice and the hardcourt
More on passing data and the shot quality debate – Hockey Prospectus
There’s no such thing as advanced sports statistics

1 thought on “The Red Wings have lost their championship identity”