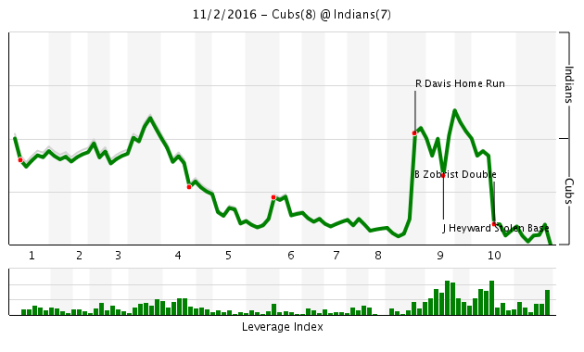 Last night’s World Series finale had everything, and it was amazing to watch. You’ll find plenty to read about it across the web today. For now, anyway, my contribution to that plenty will be, like the bulk of what you usually find here, minimal, derivative, and frivolous.

The game had numerous memorable moments, and one of the most memorable was Rajai Davis’ game-tying home run off Aroldis Chapman in the eighth inning. You can see on the graph above right where it happened, and, if you want an even more graphical recollection, the video is here. As the above starkly illustrates, the Cubs were, more or less, cruising by this point. Sure, Chicago manager Joe Maddon was doing his best to keep the game interesting by mismanaging his pitching staff, but the Cubs’ lead appeared as solid as a lead reasonably can appear late in a game-seven setting. Roughly an hour before Davis’ world-inverting homer, though, when things seemed relatively quiet on the eastern front, came this tweet:

Remember we will be witnessing fireworks, friends. Do not change the channel.

Then, a moment before Davis came to the plate, a second tweet arrived:

And then the rains came. What a night.